DRIVING home to his wife and three kids in Edinburgh should've taken Andrew Stevens 20 minutes — but his severe OCD symptoms turned the commute, and every other moment in his day, into an agonising nightmare.

The journey would sometimes take the former RAF man an hour and a half because he would become convinced a slight bump in the road, instead of being a pothole, was really a child – and circle back round to check. 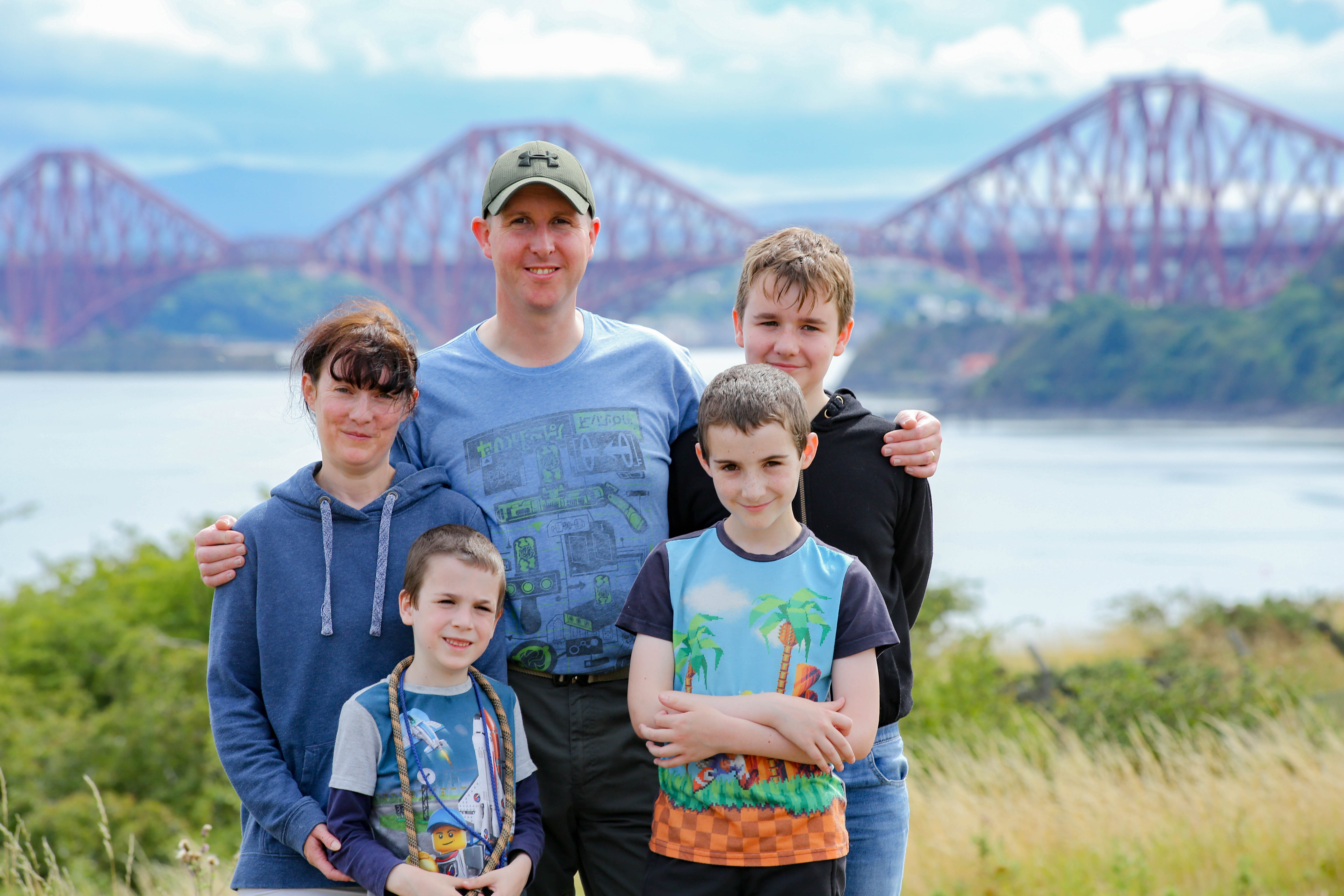 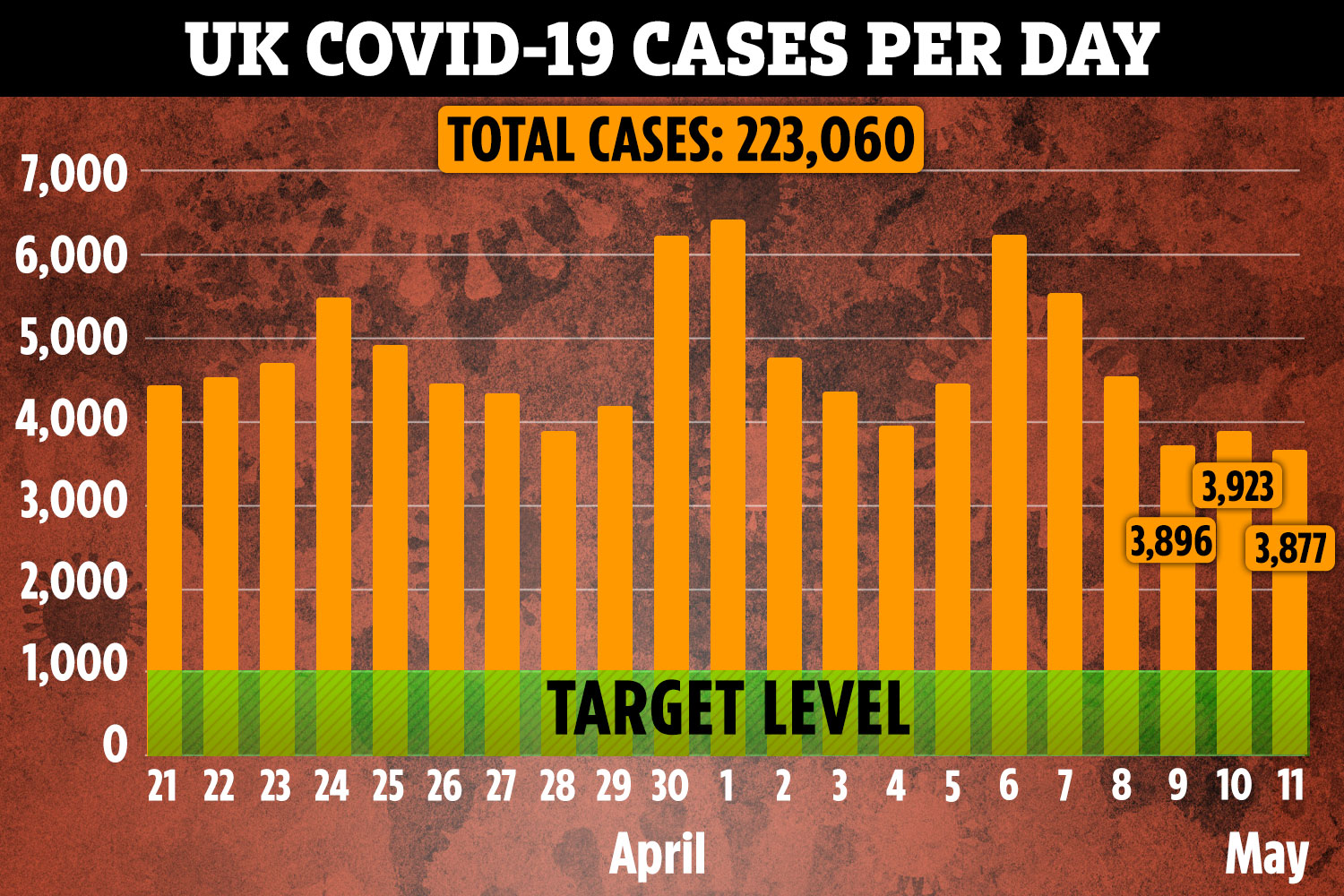 Such fears could play out two or three different times in a single journey, yet it was just one part of his life horrendously disrupted by his Obsessive Compulsive Disorder (OCD).

Arriving home exhausted by worry to his concerned wife, Claire, she'd ask him where he'd been.

"You know where I’ve been," Andrew would tell her. He'd been listening to what he called "the devil on my shoulder".

Andrew, now 38, felt he had to keep himself immaculately clean and he constantly washed his hands because he was petrified of getting sick and being unable to work. 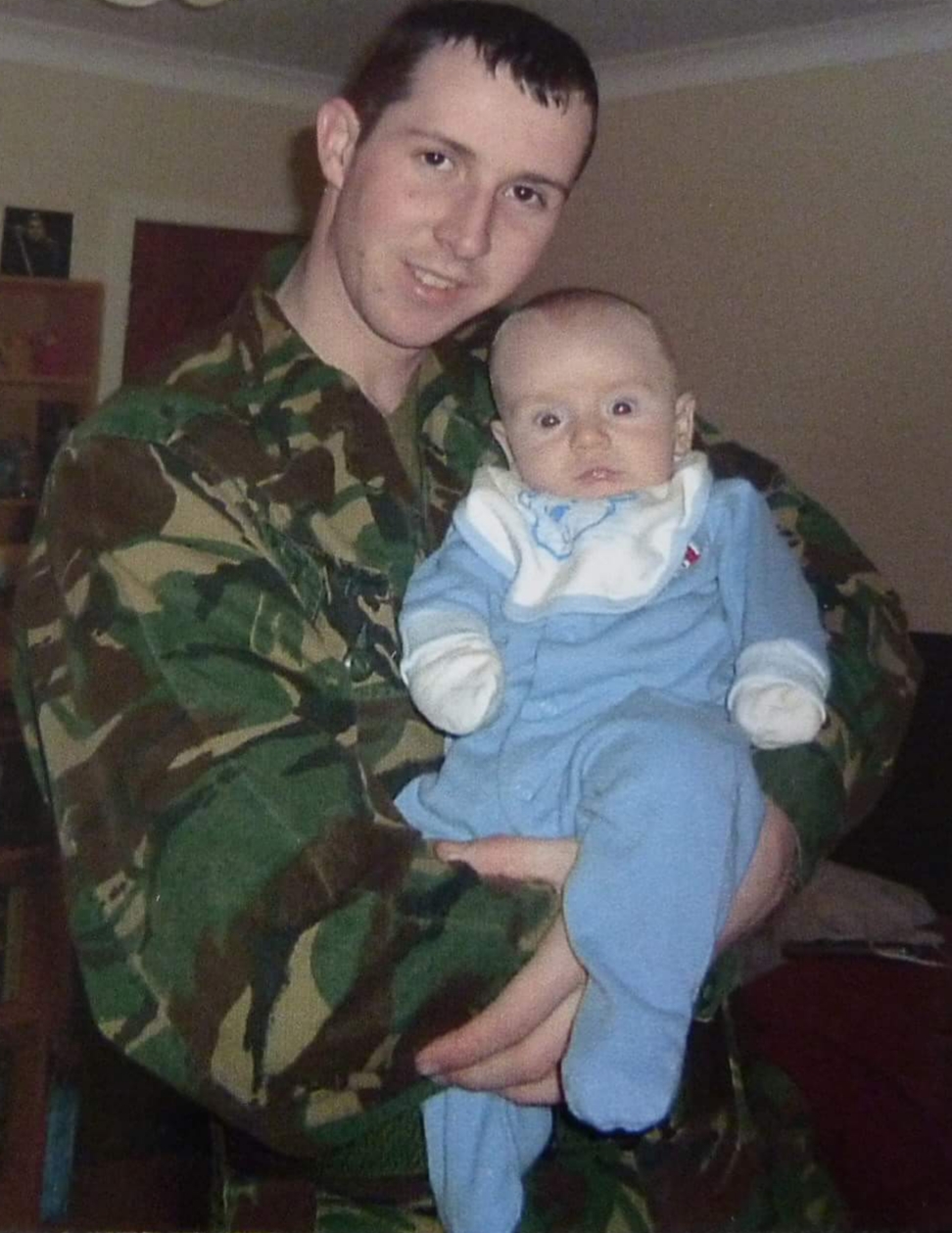 He refused to touch door handles, was afraid to step into his own garden, and wouldn't let his own children come near him for fear they might have caught a bug at school.

His condition got so bad that he even dreamed of killing himself by throwing himself off the Forth Bridge near his home.

That was the beginning of 2017 — fast-forward three years, and Andrew is now on the frontline working as a key worker bringing people food during the pandemic.

Here's how Andrew's life was swallowed by the fear of sickness — before he got the help he needed that now lets him assist others during the coronavirus crisis.

Promising RAF job up in smoke 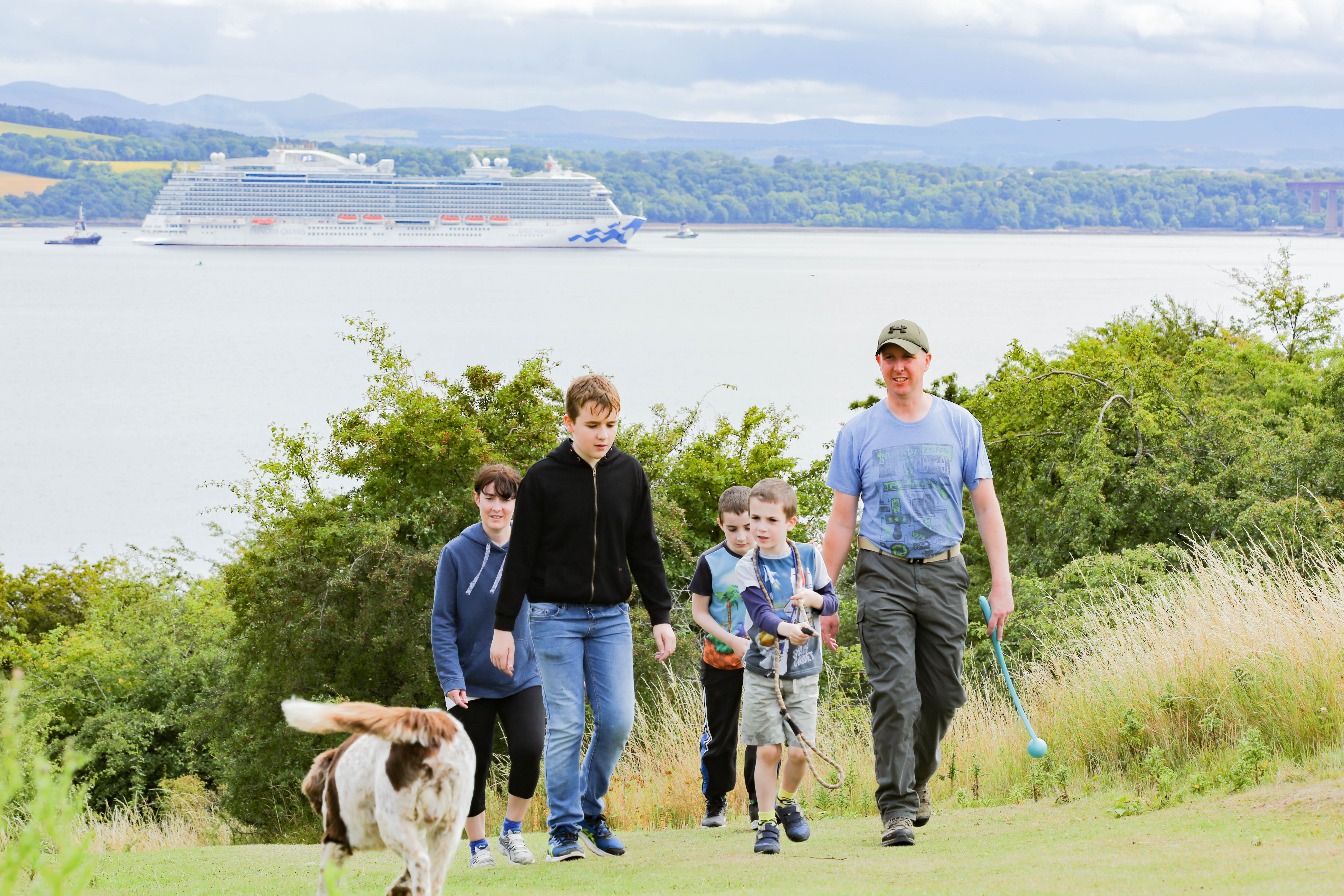 Andrew joined the RAF straight after leaving school at the age of 18 in Fife.

He thought he'd made a career for himself, signing up to at least 15 years' service in 2000.

Andrew worked as a painter and finisher, applying anti-radar materials to aircraft and maintaining their battle-worn weapons systems.

“I loved the work," Andrew tells Sun Online. "Sometimes we were literally sat on the aircraft panelling and have aircraft taking off behind you and you’d be working with big ear defenders on having to get this stuff done correctly.”

It was also during his high-flying time in the forces that he married Claire, in 2004, and they started a family together. 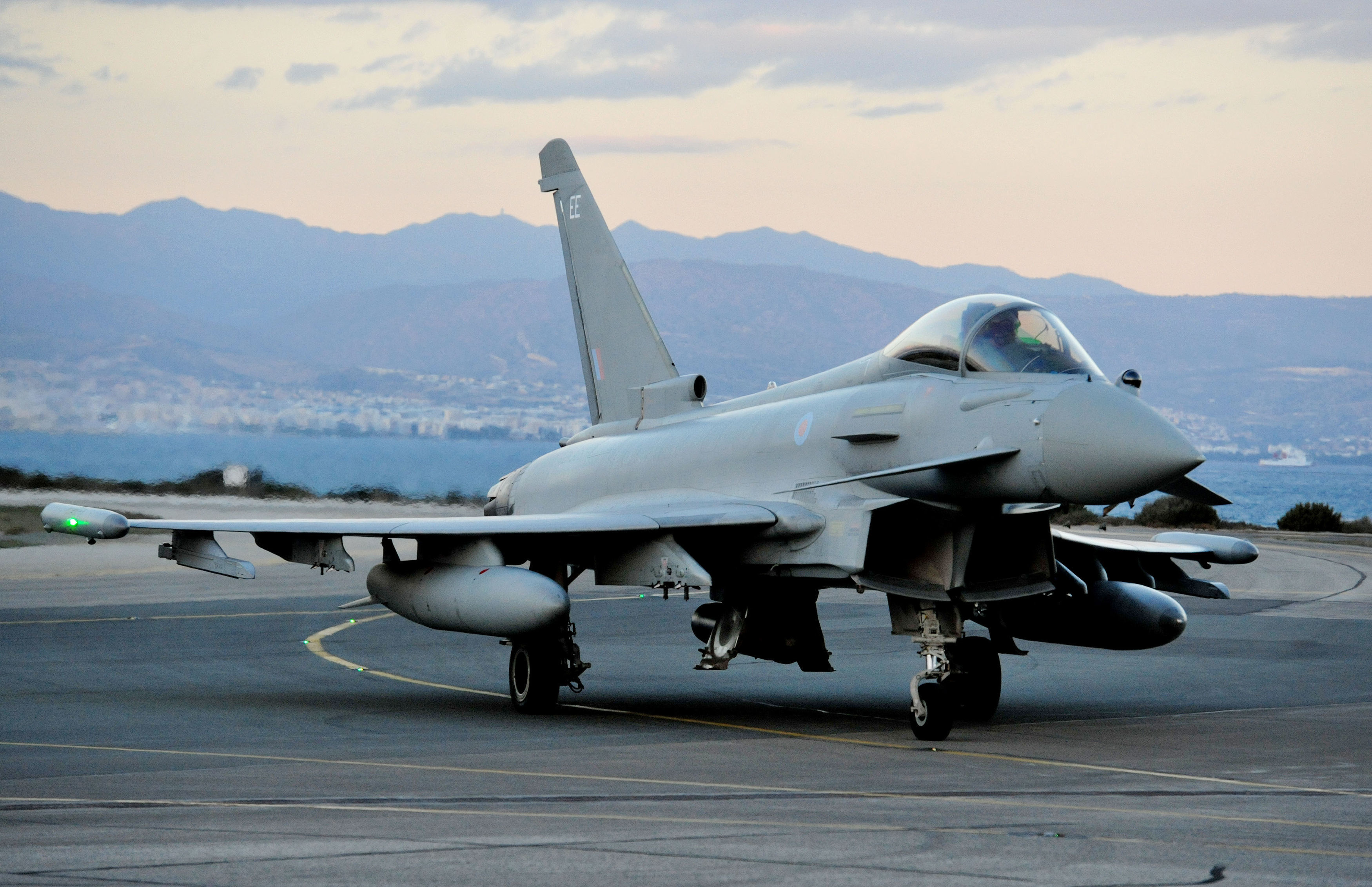 But with the advent of new technology like the Typhoon, which required less regular upkeep than older jets like the Tornado, the RAF realised it could civilianise Andrew's job.

In 2007, at the age of just 26 and with two young boys at home, Andrew was made redundant.

He was sent on a two-week course teaching him how to write a CV and attend job interviews before being told to leave the RAF for good.

“It was horrible," he said.

“Very swiftly, you’re told, ‘There you are, see you, we don’t need you anymore, here’s a pay packet, here’s your redundancy package, bye!’” 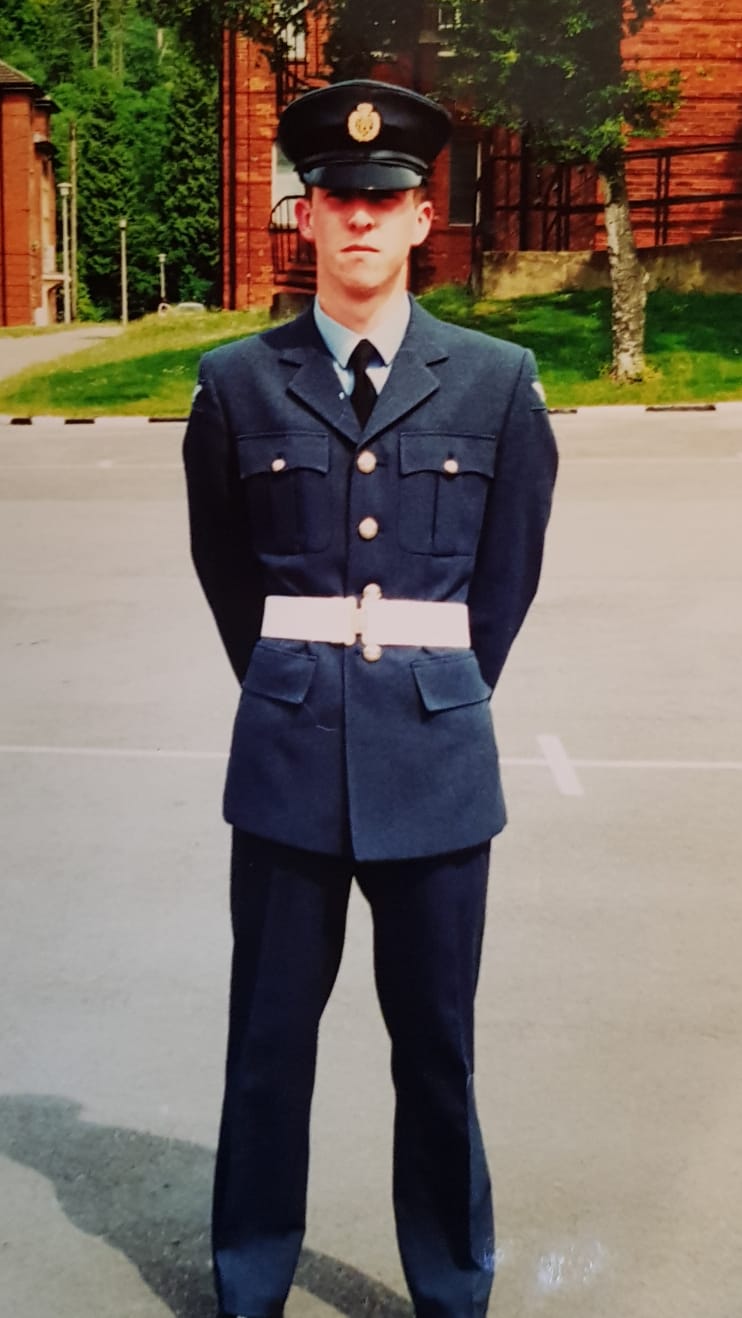 But Andrew was lucky enough to get a job fairly quickly as a bus driver with Lothian Buses in Edinburgh.

“I wasn’t looking for anything big because I actually had two little kids by this time and they were very little," he said.

"I thought, ‘I just want something simple to make them money’.”

But it wasn't long after joining that he got ill, feeling nauseous and suffering blinding headaches.

He realised he wasn't fit to drive and decided to take a few days off sick. 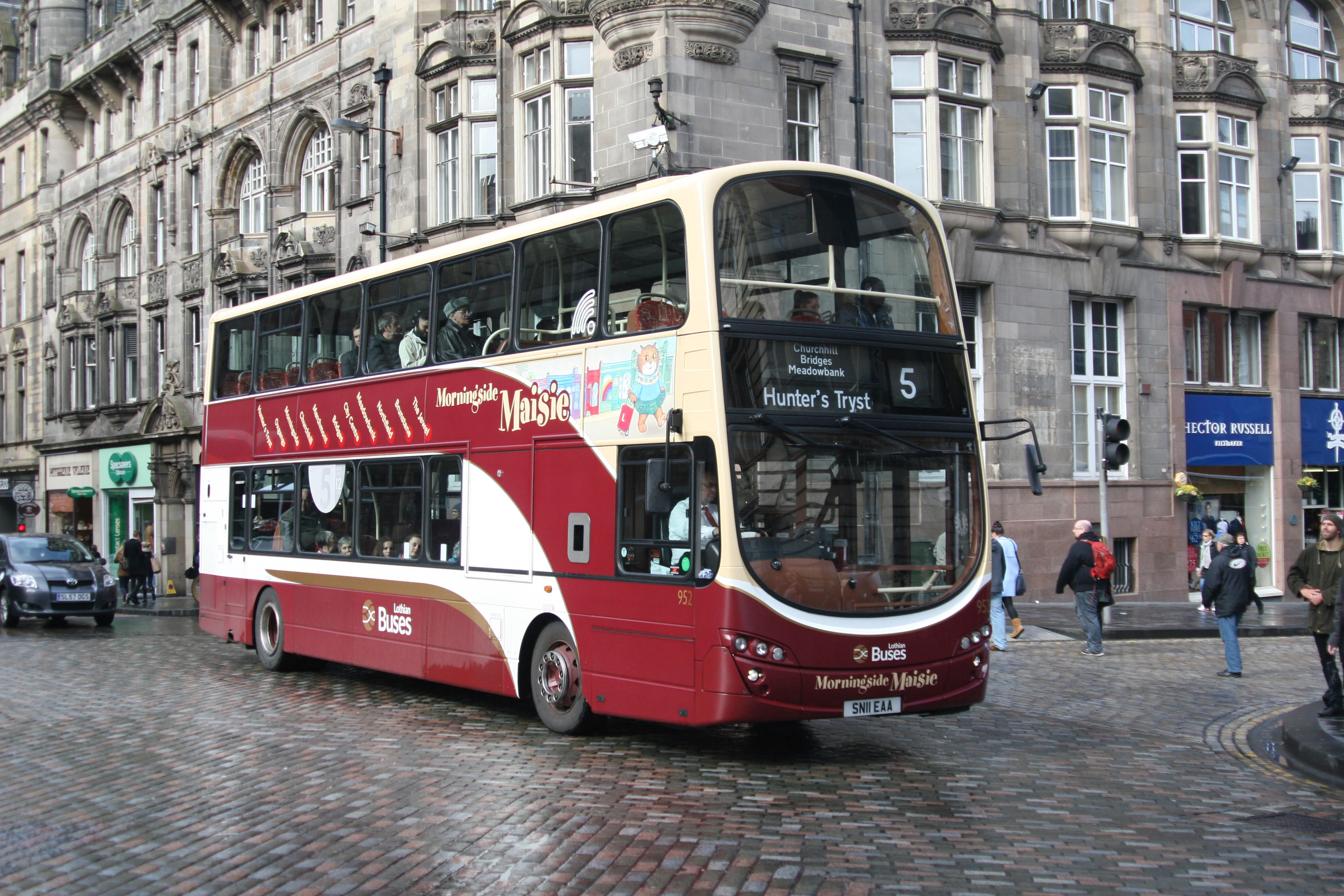 When he came back to the depot after a few days' rest, he was shocked to find himself in a disciplinary hearing.

Having never been disciplined in the RAF, Andrew was shaken by the experience.

“After my work put me on sick leave and discipline leave and didn’t pay me for being sick, I thought, ‘Well I can’t be sick again, I can’t afford to be ill.’”

That's when the routines that would come to utterly consume his life started.

Andrew's obsessive need to avoid getting sick started with him constantly washing his hands.

But as the years went by, his anxiety started to consume other areas of his life too.

“It snowballs," he says, "And then it gets into bizarre stuff, because you have intrusive thoughts.

"You see that these horrendous things are going to happen if you don’t make your bed at night.”

His commute home from work took longer and longer, obsessing about a story he'd heard in which a child was hit by three different cars on the motorway before anyone realised.

Every jolt he felt while driving instantly became a child in his mind — he'd have to turn round and drive back down the same round to make sure it was just a pothole. 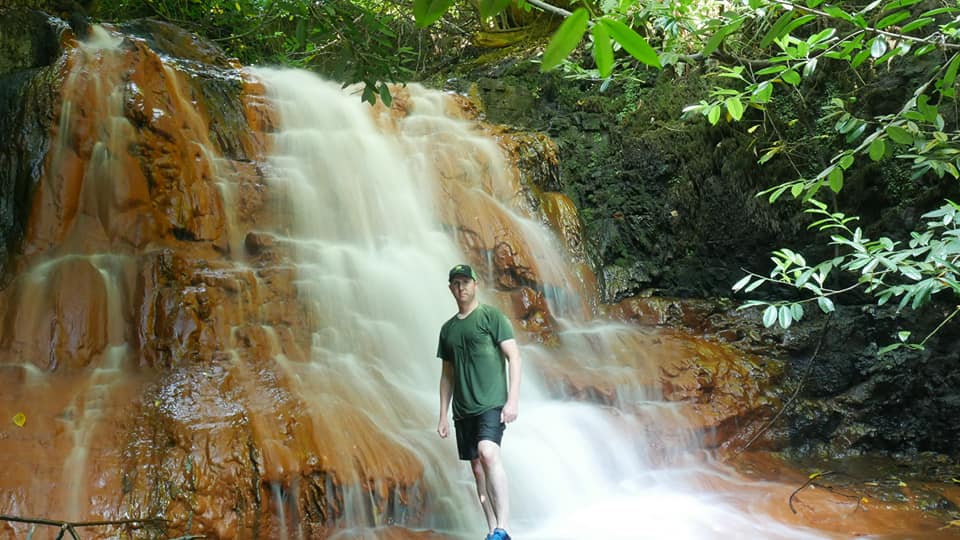 Andrew also developed a total paranoia about coming into contact with needles or dirty tissues.

He was petrified to go into his own garden and, whenever he drove to a supermarket to do a food shop, Claire would have to get out first and inspect the ground around the car before Andrew would get out.

Just going for a walk with his wife became a chore if he came across a twig on the ground.

It was very dark over Christmas and New Year.

“I’d have to look at it two or three times," Andrew says.

"I would take pictures of them so if I was worried later, I’d look back at the picture.

'I'd dream of jumping off the bridge' 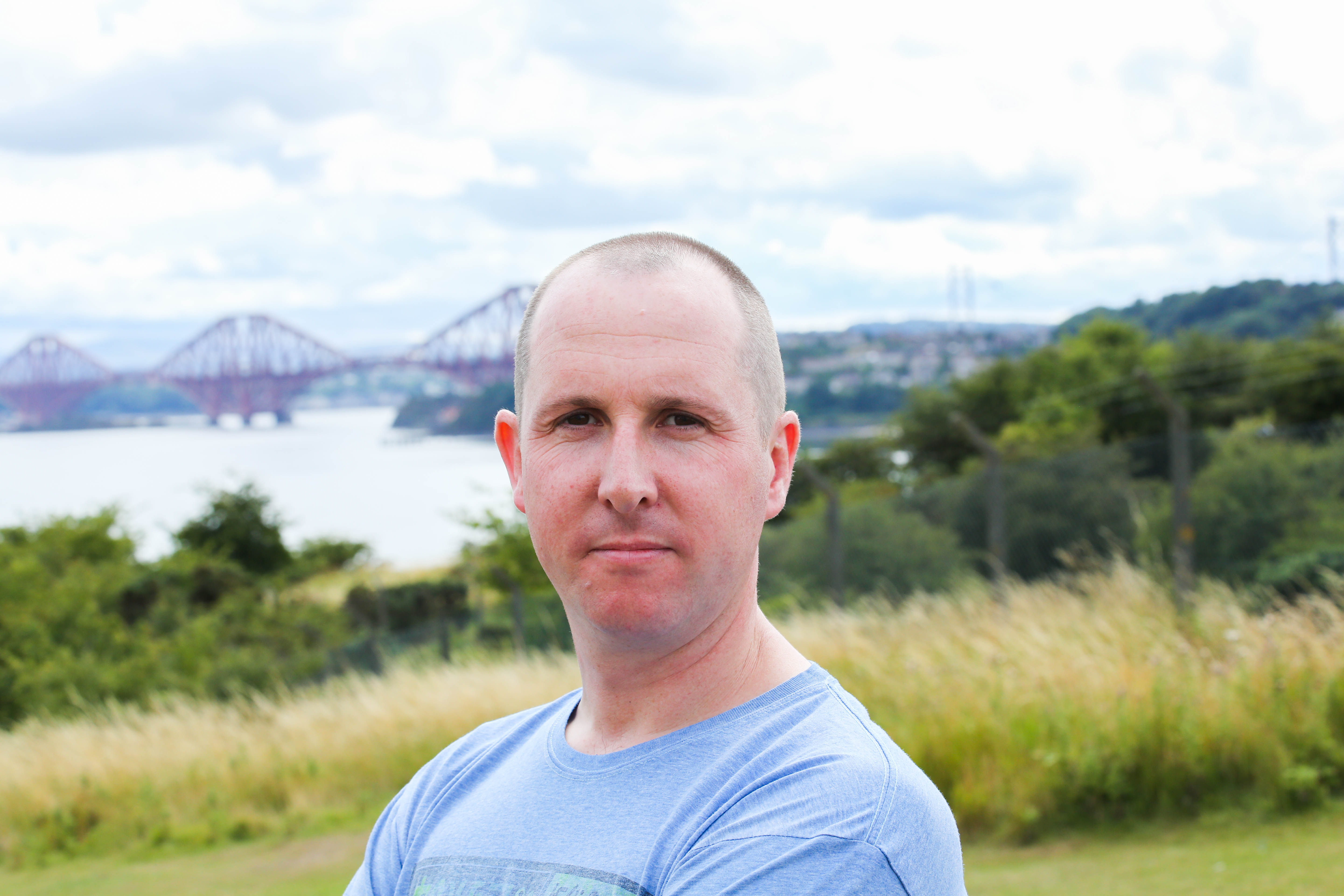 Obsessive Compulsive Disorder, commonly referred to as OCD, is a severe anxiety disorder that affects 12 in every 1,000 people.

The World Health Organisation (WHO) ranks OCD among the top ten most debilitating illnesses of any kind in terms of lost earnings and lowered quality of life.

There are two aspects to the condition – obsessions and the compulsions.

Obsessions are thoughts, ideas and urges which feel impossible to ignore by sufferers.

They can cause a huge amount of anxiety, particularly if they are distressing thoughts about harm coming to someone you love.

Compulsions are the rituals patients perform to rid themselves of the attendant anxiety of obsessive thoughts.

Most people with OCD recognise their obsessions and compulsions are irrational but they can’t stop acting on them.

While OCD tends to develop slowly over a long period of time, stressful life events can also act as triggers, including bereavement, illness, or family issues.

And he had years for it to get worse, sitting in his cab, driving the same routes, with little to distract him from his anxious thoughts.

“The demanding thing about being a bus driver, and I think the reason I lost my mind on the busses, is because you sit by yourself, you don’t talk to anyone," he says.

"People are nice, but a lot of people aren’t. So you’re predominantly on your own all day long."

I live right next door to the Forth Bridge. I had dreams where I walked up and actually jumped off it.

After nearly a decade of letting his declining mental health go unchecked, Andrew's wife pushed him into action.

In December 2016, she arranged for him to see a GP, making him go with a list of everything he did in his extreme daily routines so he wouldn't forget to mention the incessant cleaning, the lengthy drives home, the distancing from his kids.

“Straight away the doctor went, ‘You’re not going back to your work — you have severe OCD,'” Andrew says.

With Christmas around the corner, he contacted Lothian Buses to say he would need time off. 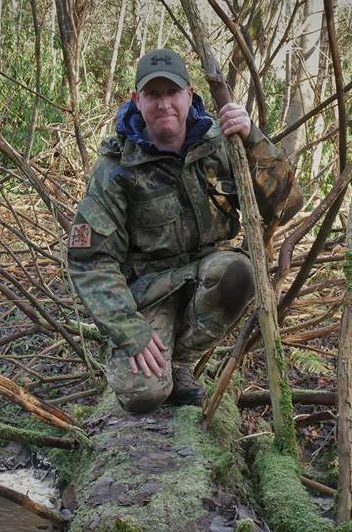 He expected that, with his decade of service, he would be given full sick pay.

But on the last post day before Christmas, Andrew says he received a letter from his employer saying he would have to go on statutory sick pay.

“I went from a £350-a-week job with full sick pay because I’d been there 10 years, to £80-a-week and a mortgage payment just after the New Year.

"It was very dark over Christmas and New Year.”

So dark, in fact, that Andrew dreamed of ending his life.

"I live right next door to the Forth Bridge. I had dreams where I walked up and actually jumped off it. 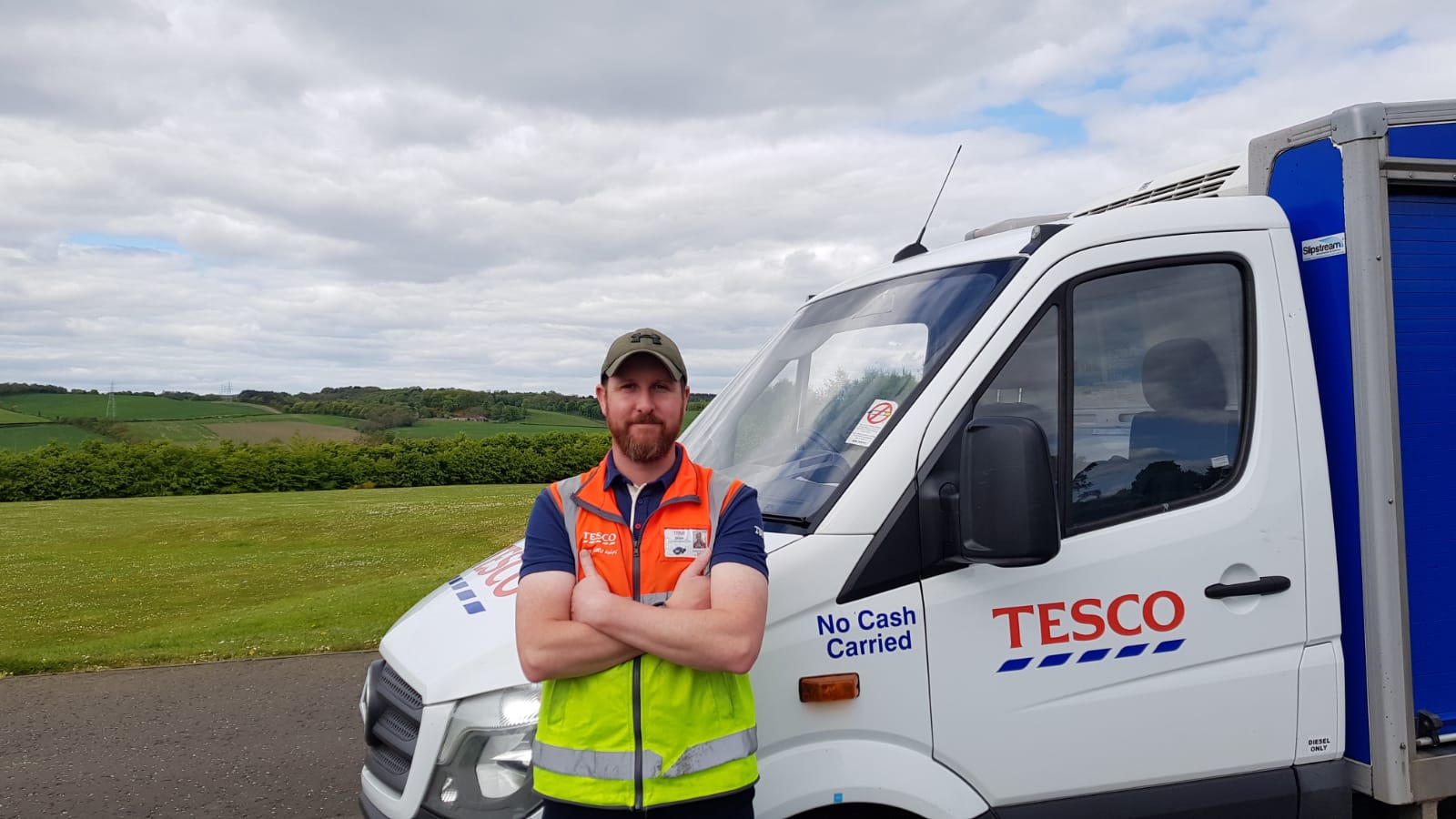 With his life in the balance, Andrew couldn't afford to waste any time.

That's when he contacted the RAF Benevolent Fund — a charity that provides welfare support to former and serving air force personnel and their dependants.

The organisation helped Andrew get the sick pay he was entitled to and got him to see a therapist in January, who treated his symptoms with talking therapies and medication.

“I owe them everything," Andrew says.

"They helped me in every way."

Andrew didn't receive his appointment letter from the NHS until May — six months after he was diagnosed and on the brink of suicide.

Back to the front line 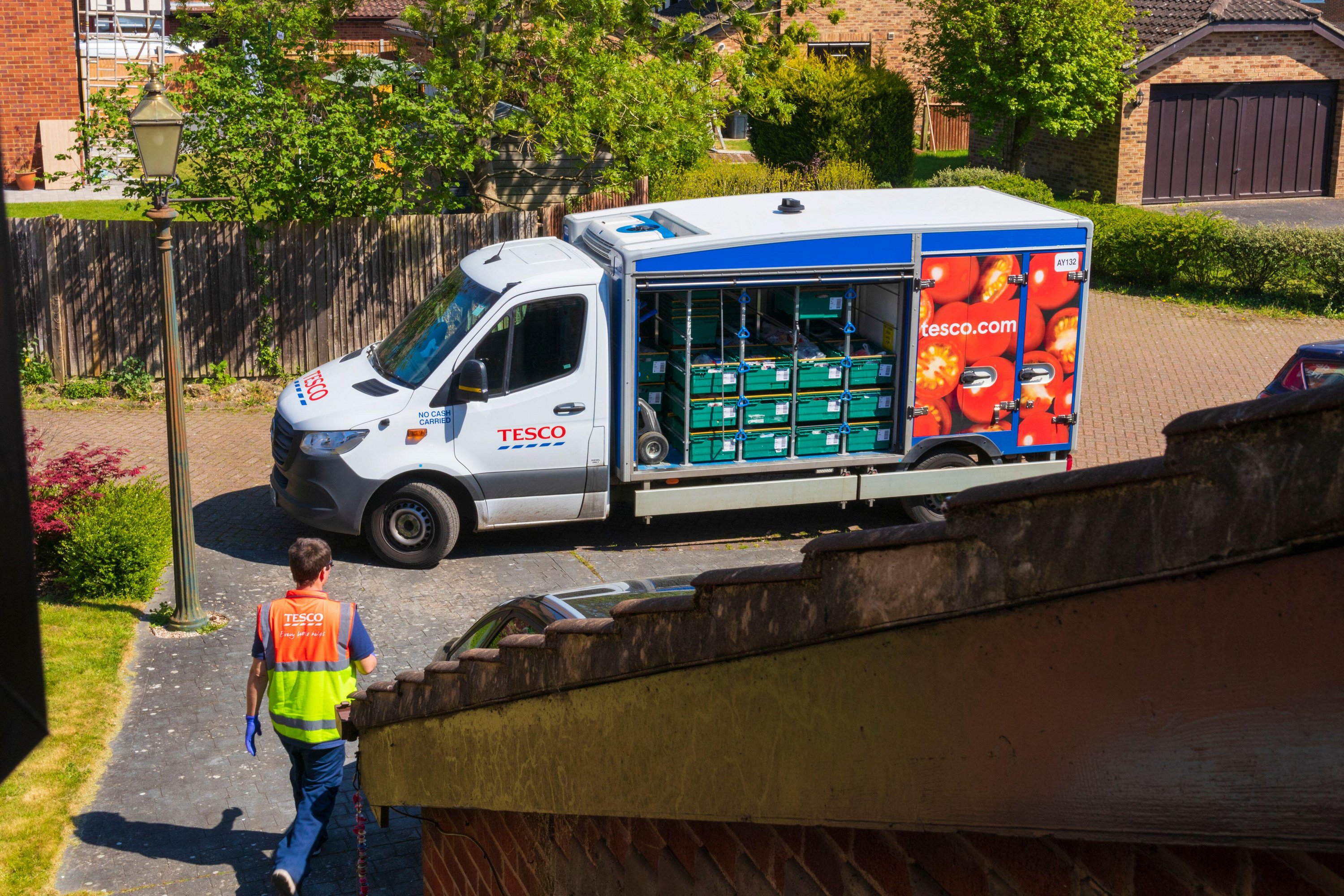 Four years ago, Andrew couldn't walk down the street without taking pictures of twigs because of his severe anxiety.

Now, during the coronavirus lockdown, he's sometimes the only person on a street — bringing people their food shopping as a frontline key worker.

He left the bus company in 2018 and started working for a charity helping kids overcome their own fears through outdoor activities like rock climbing and gorge walking.

"I loved it, inspiring the kids and seeing them come on.”

But when the organisation folded last summer, Andrew started working as a Tesco delivery driver.

Where he was once terrified of getting sick, he's now bringing shopping to others who can't leave the house during the pandemic. 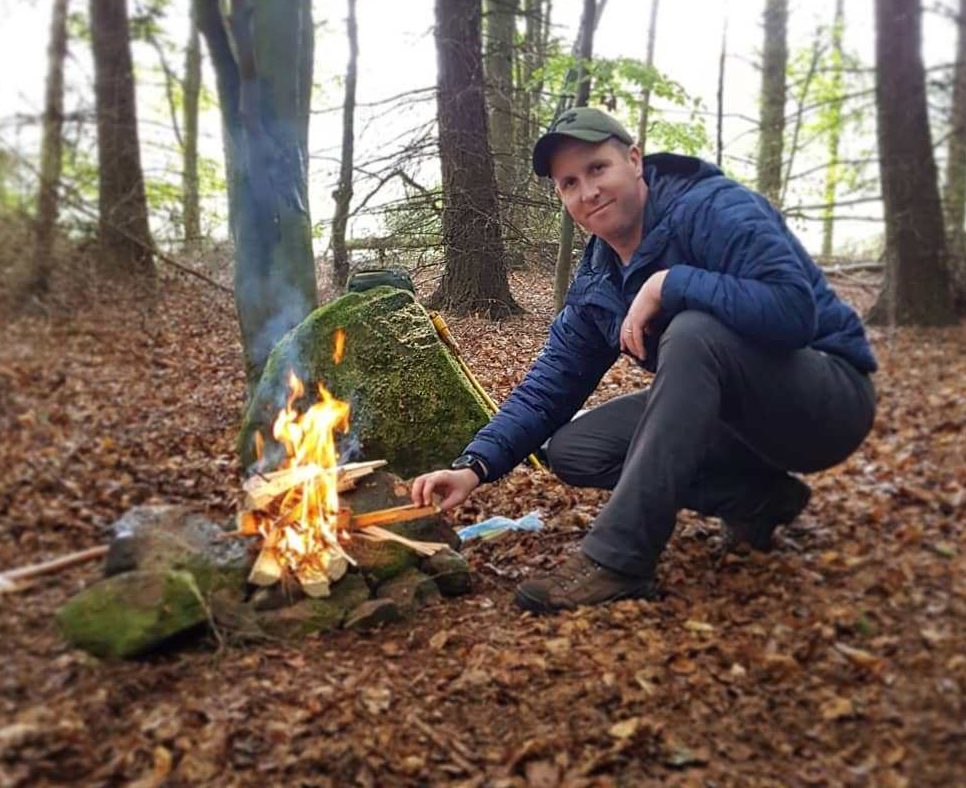 "I’ve had people complain they didn’t get the right Dolmio sauce: ‘I didn’t want the one with the extra mushrooms!’

"Well, sorry, there’s an old lady down the road who needs my help too."

Andrew was planning on launching a new company, Courage2Explore, to teach bushcraft and survival skills, but the coronavirus outbreak has put that on hold.

Instead, he's now spending his time helping others, driving into the small hours in the evening to bring people their much-needed supplies.

All Andrew asks is that others try to be considerate too — especially those ordering shopping when they could walk to supermarkets instead.

“They’re that close to the store, when you deliver to them, you’re looking across at the store thinking, ‘You could have walked across’.

A Lothian Buses spokesperson said: “Lothian is proud to have many employees across our business units who are ex-armed forces personnel or currently serve in the reserves.

"We are unable to comment on circumstances involving individual employees.”