More blood on the streets of Myanmar: Another protester is shot dead amid increasingly brutal crackdown, while YouTube removes channels run by country’s military

Security forces in Myanmar have launched another violent crackdown on pro-democracy protesters, shooting at least one dead in the bloodiest week since military leaders seized power in a coup.

A man in his 20s, named locally as Ko Zaw Myo, died on Friday after being shot in the neck by police during protests in the city of Mandalay.

Video also showed a police officer escorted by soldiers carrying what appeared to be a protester’s limp body off the streets, though the footage has not been verified.

Meanwhile officers in the largest city of Yangon opened fire with rubber bullets and tear gas to disperse thousands of activists who were joined on Friday by around 100 doctors wearing white coats. 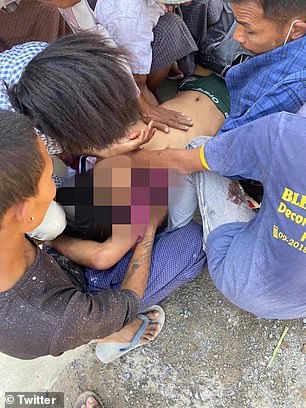 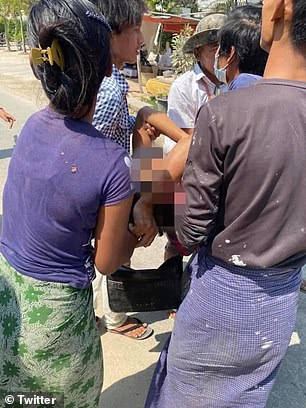 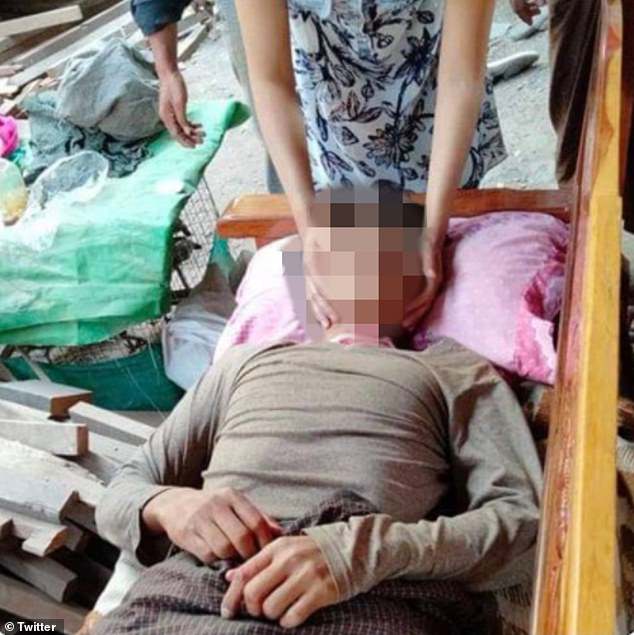 The fatal shooting comes after a week of bloody violence which has seen 40 people shot dead, bringing the total since the start of the coup to more than 50 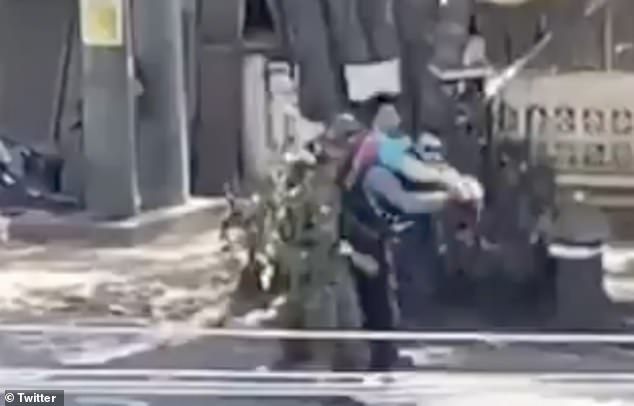 Video also showed what appeared to be a police officer accompanied by two soldiers hauling away the limp body of a protester in Mandalay, but could not be independently verified 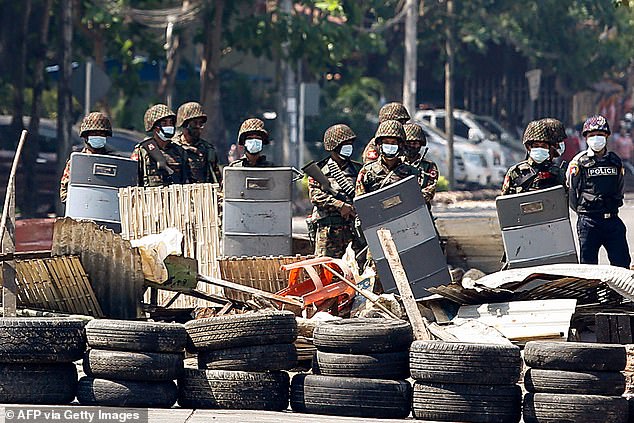 Myanmar’s armed forces and police officers have been steadily escalating their use of violence against protesters, before unleashing a bloody crackdown this week 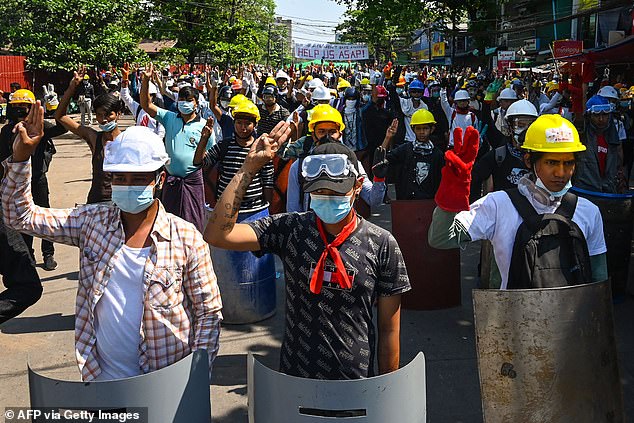 Despite being targeted with live ammunition, tear gas, rubber bullets, and slingshots, tens of thousands of demonstrators have turned out for daily protests across the country 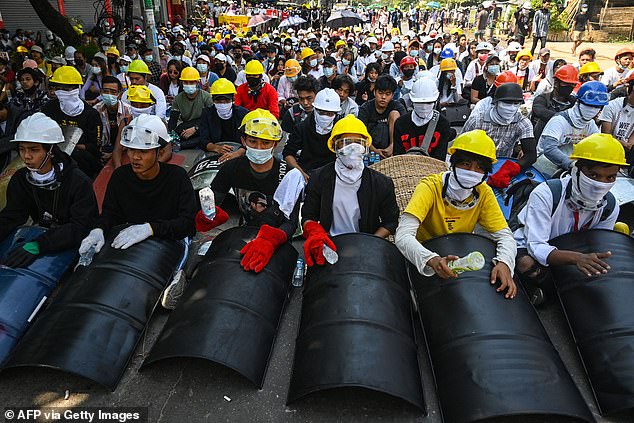 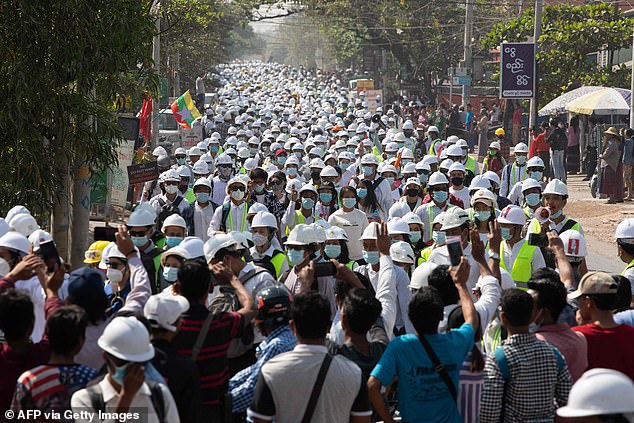 Engineers and students take part in a demonstration against the military coup in Mandalay, before a protester was shot in the neck

More than 50 people have now died protesting the military’s coup which took place on February 1 on the eve of a new parliament being sworn in.

Military-backed parties had been hammered at the election with Aung San Suu Kyi’s party receiving some 80 per cent of the votes – a result that generals have claimed was fraudulent, without providing evidence.

They have announced a year-long emergency rule, pledging that fresh elections will eventually be held and the winner honoured, though few who lived through five decades of junta rule believe that will come to pass.

Near-daily protests have been taking place in the country since the coup tens of thousands of people unite demand the return of democracy, despite increasing levels of violence.

After weeks of tense standoffs, police unleashed a bloodbath on Wednesday this week when officers in cities around the country opened fire on marchers largely without warning, leaving at least 38 dead.

It marked the single bloodiest day since the coup, and raised fears that violence would intensify further.

On Thursday, the military saw fit to buzz the city of Mandalay with low-flying fighter jets in an attempt to intimidate marchers – who turned out none-the-less.

The violence came as the junta lost a tug of war over leadership of its U.N. mission in New York and the United States unveiled new sanctions targeting military conglomerates after the deaths of dozens of civilian protesters.

Activists demanding the restoration of the elected government of veteran democracy champion Aung San Suu Kyi held more demonstrations in several towns and cities on Friday, with a crowd of thousands marching peacefully through the second city of Mandalay.

‘The stone age is over, we’re not scared because you threaten us,’ the crowd chanted.

A crowd also gathered in the town of Pathein, to the west of Yangon, a witness said.

On Thursday, police broke up rallies with tear gas and gunfire in several cities but their crackdown was more restrained than on Wednesday, when the United Nations said 38 people were killed in the bloodiest day of protests.

U.N. human rights chief Michelle Bachelet demanded the security forces halt what she called their ‘vicious crackdown on peaceful protesters.’ Bachelet said more than 1,700 people had been arrested, including 29 journalists.

Singapore has been the most outspoken of Myanmar’s neighbours and its foreign minister, Vivian Balakrishnan, said it was a ‘national shame’ for armed forces to use weapons against their people. 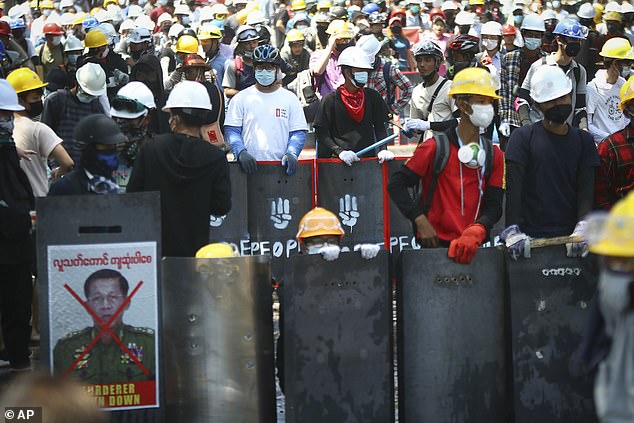 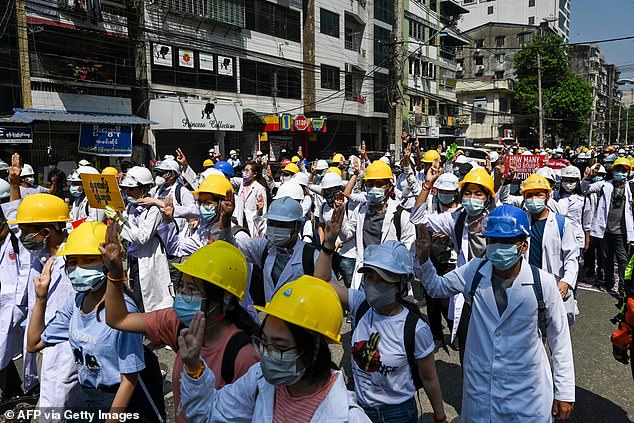 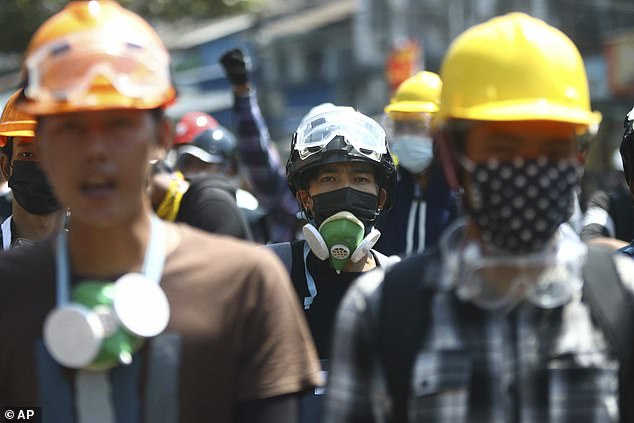 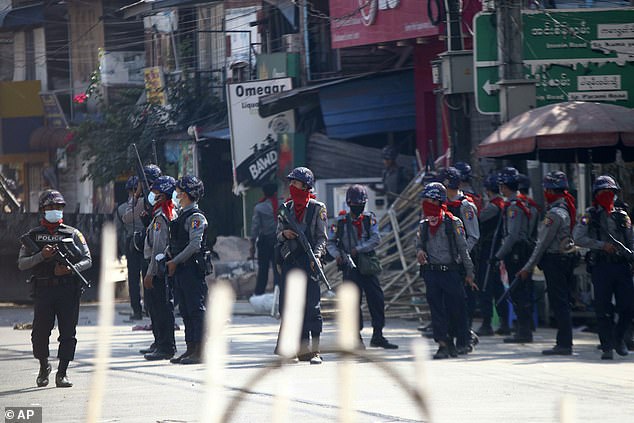 He called on the military to seek a peaceful solution but acknowledged external pressure would have only a limited impact on the situation.

A spokesman for the ruling military council did not answer telephone calls seeking comment.

Adding to a sense of unease, electricity supplies were cut in many parts of the country on Friday. A utility official later said it was due to a system failure.

A clash over who represents Myanmar at the United Nations in New York was averted – for now – after the junta’s replacement quit and the Myanmar U.N. mission confirmed that Ambassador Kyaw Moe Tun remained in the job.

The junta fired Kyaw Moe Tun on Saturday after he urged countries at the U.N. General Assembly to use ‘any means necessary’ to reverse the Feb. 1 coup.

In Washington, it was unclear whether Myanmar’s embassy was still representing the junta, after it issued a statement decrying the deaths of civilian protesters and called on authorities to ‘fully exercise utmost restraint’.

One diplomat in the embassy resigned and at least three said in social media posts they were joining the civil disobedience movement of strikes against the military.

Myanmar activists are calling for the release of Suu Kyi, 75, who was detained on the morning of the coup, and recognition of her Nov. 8 election victory. They also reject the junta’s promise to hold new elections at an unspecified date. 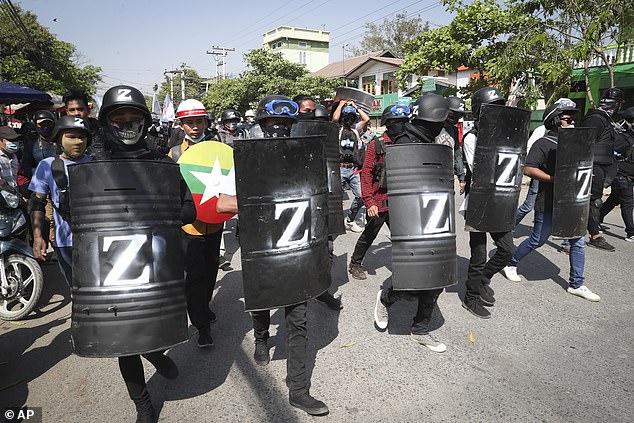 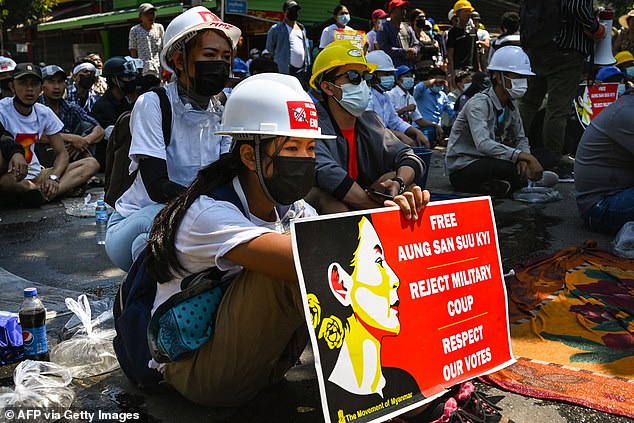 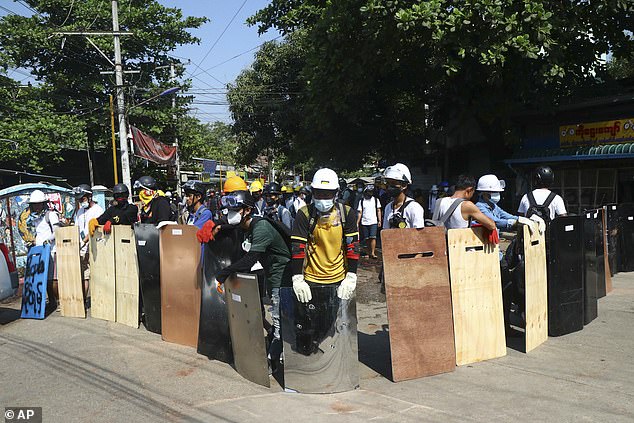 Suu Kyi’s National League for Democracy (NLD) party won the election in a landslide but the military has refused to accept the result citing fraud. The election commission said the vote was fair.

The U.S. Commerce Department designated trading curbs on Myanmar’s defence and interior ministries and two military conglomerates that control swathes of the economy, with interests ranging from beer to real estate.

But the measures are expected to have limited impact as the entities are not major importers.

The U.N. human rights investigator on Myanmar, Thomas Andrews, urged the Security Council – which meets to discuss the situation later on Friday – to impose a global arms embargo and targeted economic sanctions on the junta.

The United States has told China, which has declined to condemn the coup, that it expects it to play a constructive role. China has said stability is a top priority in its strategic neighbour.