Israel’s parliament narrowly voted 60-59 in favour of the new government on Sunday, meaning ultra-nationalist Bennett will head the new cabinet.

Bennett, a former ally of Netanyahu turned bitter rival, will now preside over a diverse and fragile coalition comprised of eight parties with deep ideological differences.

Netanyahu sat silently during the vote. After it was approved, he stood up to leave the chamber, before turning around and shaking Bennett’s hand.

A dejected Netanyahu, wearing a black medical mask, then sat down in the opposition leader’s chair.

Sunday’s vote ended a two-year cycle of political paralysis in which the country held four elections.

Minutes later, Bennett was sworn into office, followed by members of the new Cabinet.

But in a sign of what is to come, Bennett was heckled and repeatedly interrupted by Netanyahi’s supporters who shouted ‘shame’ and ‘liar’ as he addressed parliament on Sunday. Several of the Netanyahi loyalists were escorted out of the chamber.

And in a scathing speech, Netanyahi vowed he would be ‘back soon’ and fight against the ‘dangerous’ coalition.

‘I will fight daily against this terrible, dangerous left-wing government in order to topple it,’ Netanyahu said at the end of his lengthy 30-minute speech in the Knesset, Israel’s Parliament. ‘With God’s help, it will happen a lot earlier than you think it will.’

He added: ‘If it’s our destiny to be in the opposition, we’ll do so with our heads high until we take down this bad government and return to lead the country our way.’

In a warning to Iran, Hamas and Hezbollah that he won’t be away for long, Netanyahu declared: ‘We’ll be back soon.’

The upcoming crunch vote will either end Netanyahu’s record time in office or, in case of a last-minute upset, return Israel to a stalemate likely to trigger a fifth general election since 2019. 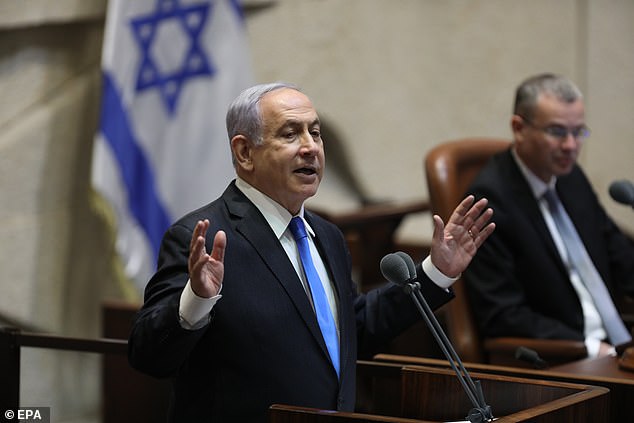 But it expected that Bennett will become the new prime minister, and in his role he will have to maintain an unwieldy coalition of parties from the political right, left and centre.

The eight parties, including a small Arab faction that is making history by sitting in the ruling coalition, are united in their opposition to Netanyahu and new elections but agree on little else.

They are likely to pursue a modest agenda that seeks to reduce tensions with the Palestinians and maintain good relations with the U.S. without launching any major initiatives.

Netanyahu, who is on trial for corruption, remains the head of the largest party in parliament and is expected to vigorously oppose the new government. If just one faction bolts, it could lose its majority and would be at risk of collapse, giving him an opening to return to power.

The country’s deep divisions were on vivid display as Bennett addressed parliament ahead of the vote as he was heckled by supporters of Netanyahu. 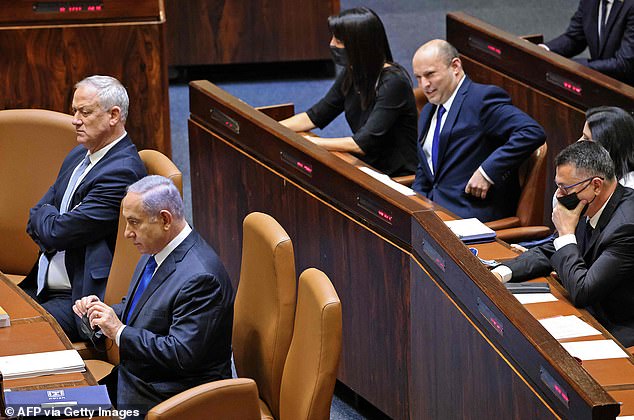 Ahead of the vote, a parliamentary debate became heated as Netanyahu vowed to ‘topple’ the new coalition, which is led by Bennett

Bennett said the country, after four inconclusive elections in under two years, had been thrown ‘into a maelstrom of hatred and in-fighting’.

‘The time has come for different leaders, from all parts of the population, to stop, to stop this madness,’ he said to angry shouts of ‘liar’ and ‘criminal’ from right-wing opponents.

‘Israel will not allow Iran to arm itself with nuclear weapons,’ Bennett said, vowing to maintain Netanyahu’s confrontational policy. ‘Israel will not be a party to the agreement and will continue to preserve full freedom of action.’

Bennett nevertheless thanked President Joe Biden and the U.S. for its decades of support for Israel.

Netanyahu, speaking after him, vowed to return to power. He predicted the incoming government would be weak on Iran and give in to U.S. demands to make concessions to the Palestinians. 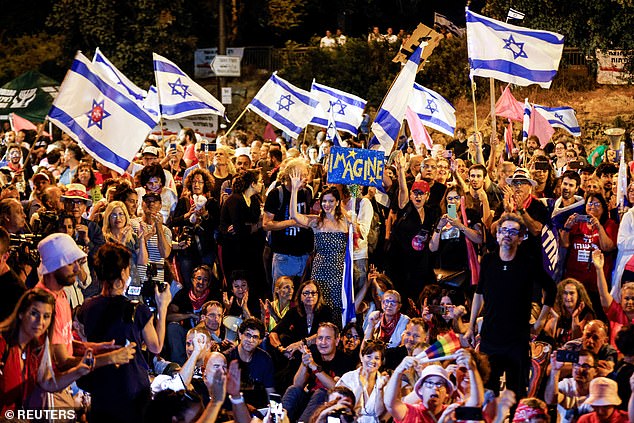 He also accused Bennett of carrying out the ‘greatest fraud in Israel’s history’ after he formed a coalition with Yesh Atid party leader Yair Lapid, despite saying he had ruled out a government with Lapid before the election.

Netanyahi said: ‘I’ve heard what Bennett said [about standing firm against Iran], and I’m concerned, because Bennett does the opposite of what he promises,” Netanyahu said. ‘He will fight Iran the same way he won’t sit with [Yesh Atid leader Yair] Lapid, Labor and Ra’am.’

‘The prime minister of Israel needs to be able to say no to the president of the United States on issues that threaten our existence,’ Netanyahu said during the 30-minute speech, which went past the 15 minutes allocated to him.

‘Who will do that now?… This government does not want and is not capable of opposing the United States.’

Yohanan Plesner, president of the Israel Democracy Institute, a nonpartisan think tank, said the new government will likely be more stable than it appears.

‘Even though it has a very narrow majority, it will be very difficult to topple and replace because the opposition is not cohesive,’ he said. Each party in the coalition will want to prove that it can deliver, and for that they need ‘time and achievements.’

Still, Netanyahu ‘will continue to cast a shadow,’ Plesner said. He expects the incoming opposition leader to exploit events and propose legislation that right-wing coalition members would like to support but can’t – all in order to embarrass and undermine them.

The new government is meanwhile promising a return to normalcy after a tumultuous two years that saw four elections, an 11-day Gaza war last month and a coronavirus outbreak that devastated the economy before it was largely brought under control by a successful vaccination campaign.

The driving force behind the coalition is Yair Lapid, a political centrist who will become prime minister in two years, if the government lasts that long.

‘A morning of change,’ promised a Sunday tweet by Lapid, who would serve as foreign minister under the coalition deal before taking over the premiership in 2023.

Lapid called off a planned speech to parliament, instead saying he was ashamed that his 86-year-old mother had to witness the raucous behavior of his opponents. In a brief speech, he asked for ‘forgiveness from my mother.’

‘I wanted her to be proud of the democratic process in Israel. Instead she, along with every citizen of Israel, is ashamed of you and remembers clearly why it’s time to replace you,’ he said.

The new government is expected to win a narrow majority in the 120-member assembly, after which it will be sworn in. The government plans to hold its first official meeting later this evening.

Netanyahu, who is battling corruption charges in an ongoing trial he dismisses as a conspiracy, has been the dominant Israeli politician of his generation, having also served a previous three-year term in the 1990s.

In Tel Aviv’s Rabin Square on Sunday, Netanyahu’s opponents were gathering for an evening of celebrations, music playing as technicians tested a sound system.

‘I have mixed feelings about this government,’ said 19-year-old Tal Surkis about the change coalition, but he added that ‘it’s something Israel needs’.

The anti-Netanyahu bloc spans the political spectrum, including three right-wing, two centrist and two left-wing parties, along with an Arab Islamic conservative party.

The improbable alliance emerged weeks after an 11-day war between Israel and Hamas, the Islamist group that rules the Palestinian enclave of Gaza, and following inter-communal violence in Israeli cities with significant Arab populations.

Netanyahu, who long ago earned a reputation as Israel’s ultimate political survivor, has meanwhile tried to peel off defectors that would deprive the nascent coalition of its wafer-thin legislative majority.

It’s unclear if Netanyahu will move out of the official residence. He has lashed out at the new government in apocalyptic terms and accused Bennett of defrauding voters by running as a right-wing stalwart and then partnering with the left.

Netanyahu’s supporters have held angry protests outside the homes of rival lawmakers, who say they have received death threats naming their family members. Israel’s Shin Bet internal security service issued a rare public warning about the incitement earlier this month, saying it could lead to violence.

Netanyahu has condemned the incitement while noting that he has also been a target.

His place in Israeli history is secure, having served as prime minister for a total of 15 years – more than any other, including the country’s founder, David Ben-Gurion.

If Netanyahu loses the premiership, he will not be able to push through parliament changes to basic laws that could give him immunity on charges he faces in his corruption trial.

Netanyahu began his long rule by defying the Obama administration, refusing to freeze settlement construction as it tried unsuccessfully to revive the peace process. Relations with Israel’s closest ally grew even rockier when Netanyahu vigorously campaigned against President Barack Obama’s emerging nuclear deal with Iran, even denouncing it in an address to the U.S. Congress.

But he suffered few if any consequences from those clashes and was richly rewarded by the Trump administration, which recognized contested Jerusalem as Israel’s capital, helped broker normalization agreements with four Arab states and withdrew the U.S. from the Iran deal.

Netanyahu has portrayed himself as a world-class statesman, boasting of his close ties with Trump and Russian President Vladimir Putin. He has also cultivated ties with Arab and African countries that long shunned Israel over its policies toward the Palestinians.

But he has gotten a far chillier reception from the Biden administration and is widely seen as having undermined the long tradition of bipartisan support for Israel in the United States.

His reputation as a political magician has also faded at home, where he has become a deeply polarizing figure. Critics say he has long pursued a divide-and-conquer strategy that aggravated rifts in Israeli society between Jews and Arabs and between his close ultra-Orthodox allies and secular Jews.

In November 2019, he was indicted for fraud, breach of trust and accepting bribes. He refused calls to step down, instead lashing out at the media, judiciary and law enforcement, going so far as to accuse his political opponents of orchestrating an attempted coup. Last year, protesters began holding weekly rallies across the country calling on him to resign.

Netanyahu remains popular among the hard-line nationalists who dominate Israeli politics, but he could soon face a leadership challenge from within his own party. A less polarizing Likud leader would stand a good chance of assembling a coalition that is both farther to the right and more stable than the government that is set to be sworn in.

Sunday’s vote comes at a time of heightened tensions in the Israel-Palestinian conflict, which has grown more bitter in the Netanyahu years, in part due to the expansion of settlements considered illegal under international law in the occupied West Bank.

Meanwhile, right-wing anger has grown in Israel over last week’s postponement of a controversial Jewish nationalist march through flashpoint areas of east Jerusalem.

The ‘March of the Flags’ is now slated for Tuesday, and the agitation surrounding it could represent a key initial test for a new coalition government.

Gaza’s rulers Hamas said that the political developments in Jerusalem wouldn’t change its relationship with Israel.

‘The form the Israeli government takes doesn’t change the nature of our relationship,’ said spokesman Fawzi Barhoum. ‘Its still a colonising and occupying power that we must resist.’