Nazanin Zaghari-Ratcliffe's husband fears she may be returned

Nazanin Zaghari-Ratcliffe’s husband fears his wife may be returned to her Iranian prison cell after a UK-based Iranian national was ordered back to the country this weekend.

Richard Ratcliffe, whose wife, 42, was released from the Evin prison in Tehran with a prison tag on March 17 amid the coronavirus pandemic, expressed his fears over her return after Aras Amiri was ordered back to jail.

Ms Amiri, a British Council employee with permanent residency in the UK, was arrested in March 2018 as she visited her sick grandmother in the capital Tehran and was given a ten-year sentence for ‘cultural infiltration’.

She was ordered back to jail this weekend after being furloughed on April 9 due to the coronavirus crisis. 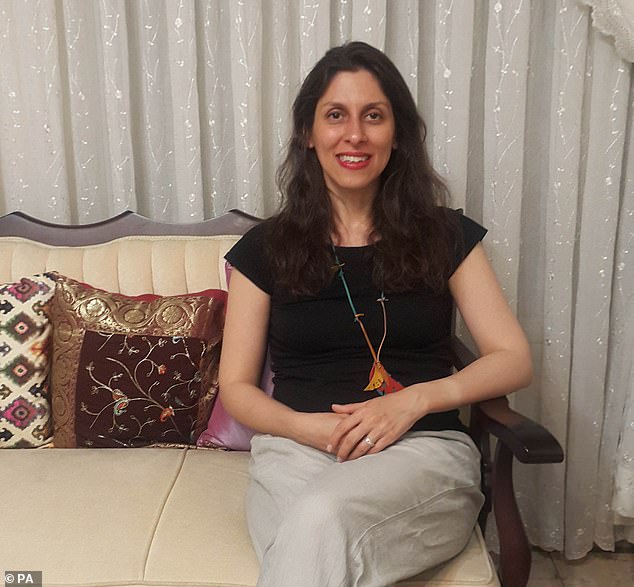 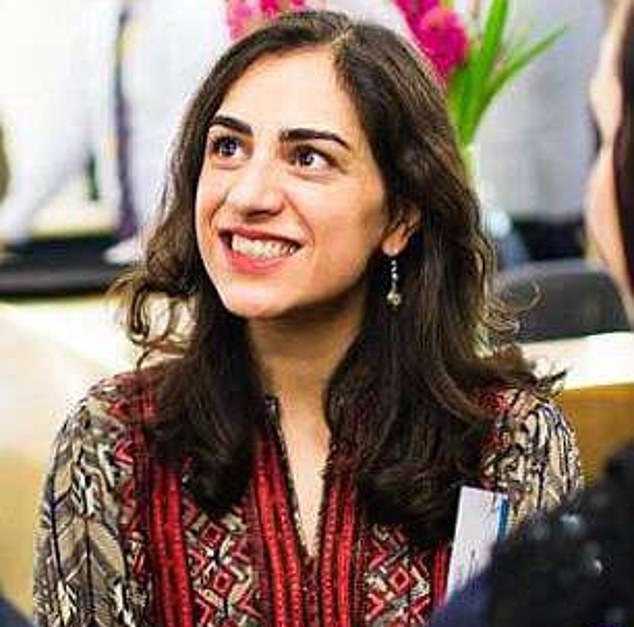 This weekend the British Council employee Aras Amiri, who is an Iranian national, was ordered to return to her Iranian prison 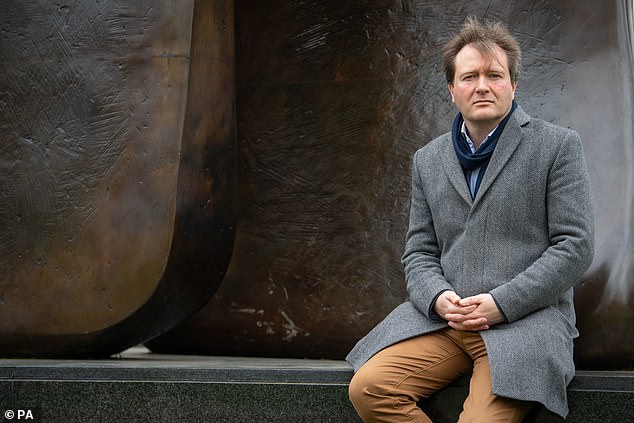 Following the decision to send Ms Amiri back to prison, Mr Ratcliffe, told The Guardian, the move meant many like his wife would continue to remain in Iran’s ‘chess game’.

He said: ‘Our thoughts are with Aras and her family. Walking back into prison is no easy thing.

‘For Nazanin’s case, I am interpreting Aras Amiri’s return as a bad sign, that the wind is threatening to change. Others are also being summoned.

‘I take it as a signal to the UK that patience is not infinite, and that we all continue to be in their chess game.’

A message on the Amnesty International Twitter page read: ‘Fears are rising that Nazanin will be sent back to jail after Aras Amiri, a UK-based Iranian national, was ordered back at the weekend. This would be beyond heartbreaking.’

Last year, Ms Amiri, a Kingston University student who lived in London for more than a decade, appealed her sentence in a letter to the head of Iran’s justice department.

She claimed in her letter that she was arrested because she refused to cooperate with Iranian intelligence officials who wanted her to spy for them in Britain.

She said: ‘I directly rejected their offer for cooperation and told them that I can only work in my own field and nothing else.’

In April, Mr Ratcliffe said he and daughter Gabriella had been spending several hours a day on video calls with his wife during her temporary release from prison in Iran. 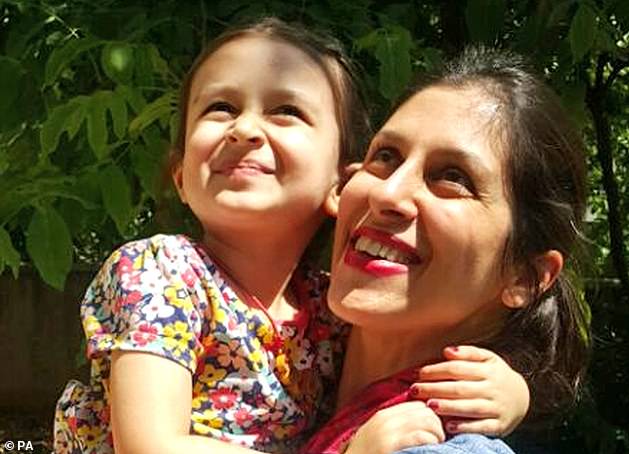 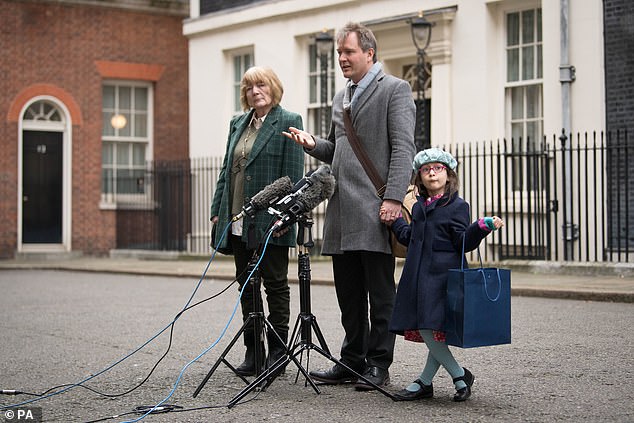 In January Richard Ratcliffe and his mother Barbara, addressed the media in Downing Street after a meeting with Prime Minister Boris Johnson

He told BBC Radio 5 Live’s Emma Barnett: ‘Nazanin was out for three days back in the summer of 2018 and we had a couple of calls then, but it was so tense and so uncertain and they were being harassed all the time.

‘This is a lot more normal. We have been complaining about the prosaics of home schooling and normal parenting – it’s been nice to muddle our way through that together.’ 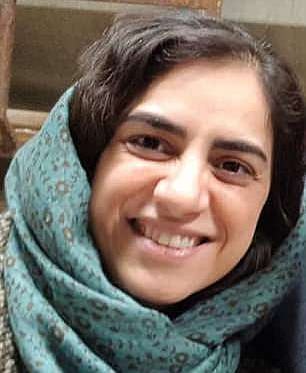 Ms Zaghari-Ratcliffe was arrested at Tehran’s Imam Khomeini Airport while travelling with her daughter, Gabriella, to the home of her parents in April 2016.

The mother-of-one was sentenced to five years in prison and accused of plotting to overthrow the Iranian government- allegations which she denies.

She was later afforded diplomatic protection by the UK Government, which argues that she is innocent and that her treatment by Iran failed to meet obligations under international law.

Following the coronavirus outbreak, Mrs Zaghari-Ratcliffe has been living in relative isolation at her parents’ house in Tehran while the country struggles to deal with the pandemic.

She has had to wear an ankle tag during the furlough, and can only go within a 300-metre range of her parents’ home.

After her release, Foreign Secretary Dominic Raab urged the Iranian regime to ‘ensure she receives any necessary medical care’.

He said in a statement: ‘I am relieved that Mrs Zaghari-Ratcliffe was today temporarily released into the care of her family in Iran.

‘We urge the regime to ensure she receives any necessary medical care. While this is a welcome step, we urge the government now to release all UK dual nationals arbitrarily detained in Iran, and enable them to return to their families in the UK.’

Ms Zaghari Ratcliffe’s release in mid-March followed the release of 85,000 prisoners in Iran to stop the spread of coronavirus.

Timeline of events in the Nazanin Zaghari-Ratcliffe case

April 2016: Arrested by the Revolutionary Guard in Tehran Airport after visiting her parents in Iran with her young daughter Gabriella.

She was taken to prison and held in solitary confinement for 45 days before being moved to a women’s wing.

The mother-of-one was not given access to legal counsel or medical treatment, and the lights in her cell remained permanently switched on.

September 2016: She was sentenced to five years in prison for spying following a trial campaigners have branded ‘secret and unfair’.

April 2017: Mrs Zaghari-Ratcliffe lost her appeal to overturn her sentence.

November 2017: She is hit with fresh charges of spreading propaganda just days after Boris Johnson told British MPs she has been training journalists in Iran.

August 2018: She is temporarily released so she can spend time with her young daughter Gabriella, but is quickly sent back to prison where she suffers a panic attack

March 2020: Ms Zaghari-Ratcliffe is released from her Tehran prison on furlough due to the coronavirus pandemic

Ashouri was also handed a two-year prison sentence for receiving 33,000 euros ($36,600) in illicit funds from Israel and ordered to pay the same amount in fines.

Iran said it had captured 17 spies working for the US Central Intelligence Agency (CIA) and some had been sentenced to death.

It was unclear whether Ashouri’s jailing was linked to the same case.

After Iran announced the release of some of its prisoners, Javaid Rehman, the UN special rapporteur on human rights in Iran, said only those serving sentences of less than five years had been freed.

He said: ‘Political prisoners and others charged with heavier sentences linked to their participation in protest marches remained in jail.

‘A number of dual and foreign nationals are at real risk if they have not… got it [coronavirus], they are really fearful of the conditions.

‘This is also my worrying concern and therefore I have recommended to the state of the Islamic Republic of Iran to release all prisoners on temporary release.’

The arrest of Iranians accused of espionage has increased since Supreme Leader Ayatollah Ali Khamenei said last year there had been ‘infiltration’ of Western agents in the country.

This month, Kamal Foroughi, an 80-year-old grandfather whose family lives in London, was returned to the UK nine years after he was arrested by the regime in Tehran on spying charges.

He was arrested in 2011 and jailed for espionage in 2013 – a charge he strongly denies – and was released in late 2018 after serving five years of a seven-year sentence.