Let the good times…hold! New Orleans bars closed just a month after reopening because of a rise in coronavirus cases and hospitalizations across Louisiana

Bars in New Orleans have closed just a month after they partially reopened because of a sharp increase in Covid-19 cases and hospitalizations in Louisiana.

After the state become an international coronavirus hot spot in March, with New Orleans a focal point of cases, hospitalizations began to drop after businesses were closed following a peak in April.

Businesses including bars, dine-in restaurants, gyms and tattoo parlors closed, which appeared to flatten the curve, and in May a gradual easing of lockdown restrictions culminated with Mayor LaToya Cantrell deciding to reopen bars at 25 percent capacity on June 13.

However, the good times have been put on hold once again on Saturday when Governor John Bel Edwards – supported by Cantrell – issued a set of new restrictions following a new spike in cases and hospitalizations.

The restrictions will be in place until at least July 24 across Louisiana. 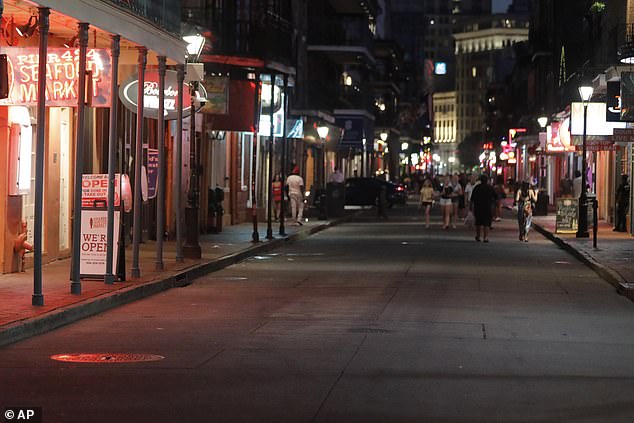 Following a spike in coronavirus cases and hospitalizations, bars in New Orleans are now limited to takeout and delivery services, although some have chosen to close completely. Above, A deserted stretch of Bourbon Street in the French Quarter of New Orleans is seen Tuesday, July 14, 2020 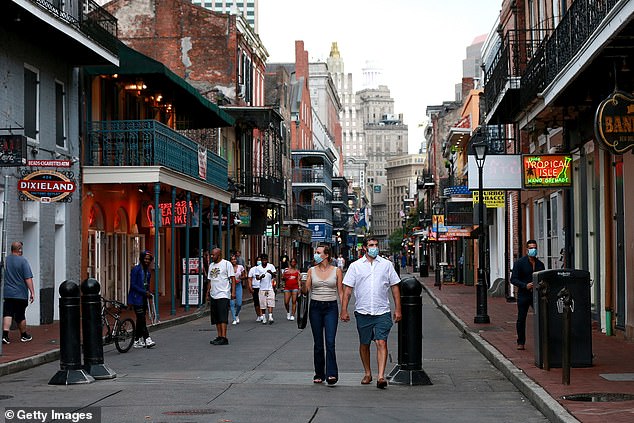 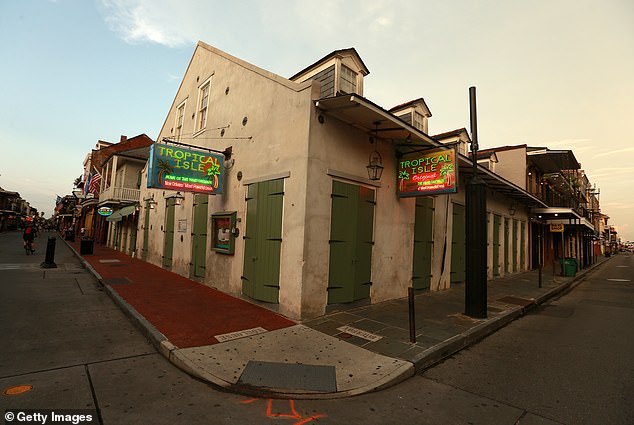 A number of bar owners have chosen to close completely following the implementation of the new restrictions. Above, closed bars are seen in the French Quarter on July 14, 2020 in New Orleans, Louisiana

While the new restrictions do not close bars completely, they are limited to take out services or delivery. Restaurants cannot allow seating at the physical bar, and customers must wear masks unless actively eating or drinking.

One bartender and general manager of cocktail bar ‘Bar Tonique’ in the French Quarter – Mark Schettler – said that the new restrictions on top of state law appeared to limit his businesses to the sale of packaged liquor, beer and frozen daiquiris.

‘A bar like mine, that doesn’t help us,’ he told the news outlet. ‘Who the hell’s going to come buy a six-pack of beer from Tonique?’

Will Wilson, gemenral manager or Brunos’ Tavern – neighborhood bar and grill in New Orleans’ Carrollton area that has been open since the 1930s – said that it would also make little sense to offer a takeout and delivery service.

‘We could stay open but we’d be bleeding money,’ Wilson said. 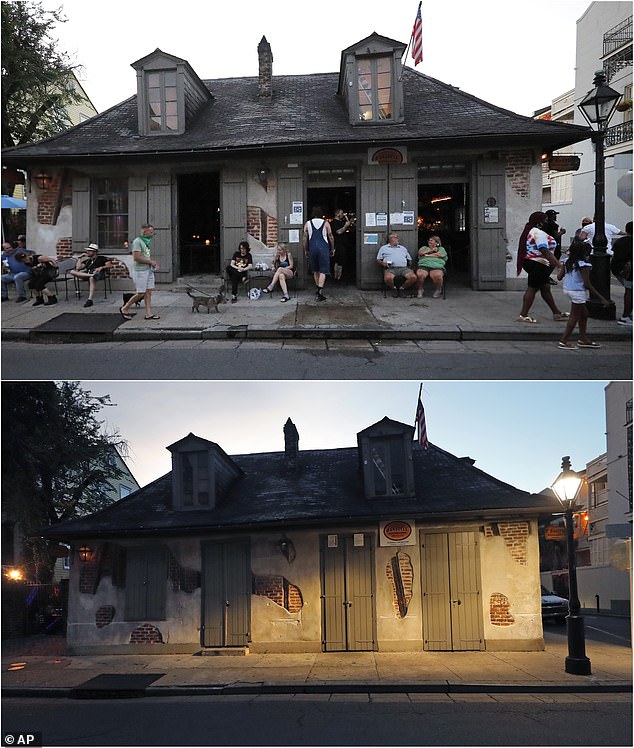 Before and after: On July 9, customers sit outside Lafitte’s Blacksmith Shop Bar, top, in the French Quarter of New Orleans. Below, on July 14, the bar sits closed

Meanwhile, Cherie Boos, manager of Lafitte’s Blacksmith Shop, a bar in an 18th century building on Bourbon Street said the bar would also be closing.

‘Anytime they changed a compliance rule, we were right there changing with it,’ she said. ‘This one, it’s a blow.’

Sate officials have said that they had no other choice but to implement a new round of restrictions of New Orleans. 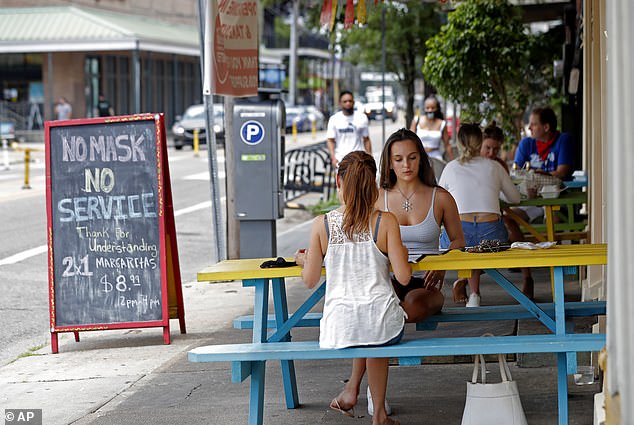 ‘No mask, no service’: A sign sits outside of El Paso Mexican Grill on Magazine Street in New Orleans, Thursday, July 9, 2020 asking customers who enter the restaurant to wear a mask 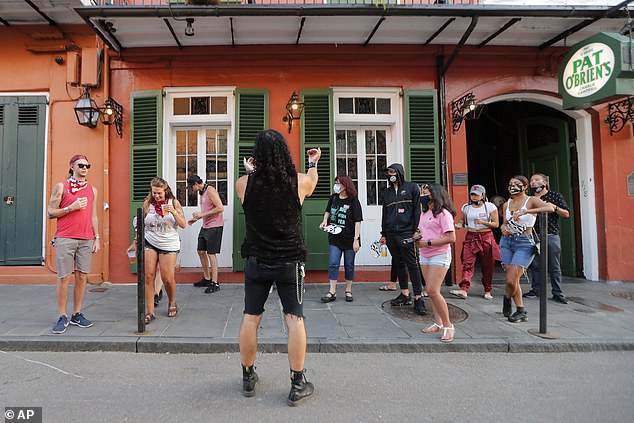 ‘Since the start of the crisis, Louisiana has identified at least 36 outbreaks, affecting at least 405 people, involving bars,’ Edwards’ office said in a Saturday press release.

‘Public health officials believe going to bars is a higher public health risk than visiting other types of businesses because people are socializing and cannot wear masks when they drink.’

The new restrictions have also set back hopes of the city’s tourism and music industries from reopening any time soon. The tourism industry employs around 94,000 people, but in April nearly half of those jobs were lost. 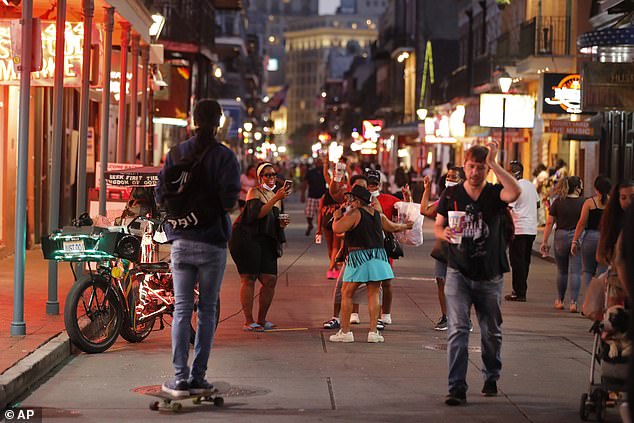 Before the new restrictions, New Orleans’ famous french quarter was beginning to look like its old self again. Above, People sing and dance to karaoke on Bourbon Street in New Orleans, Thursday, July 9, 2020 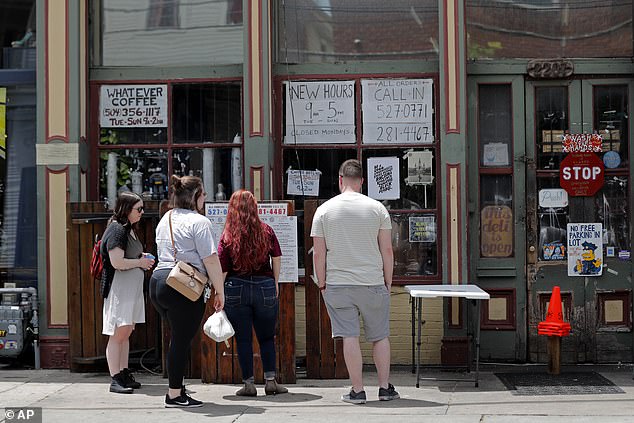 Schettler draws a comparison to when the city was hit by Hurricane Katrina in 2005, but that recovery from the virus is more complex than the recovery following the hurricane.

‘The flood waters don’t recede with COVID,’ he said to The Republic.

So far, Louisiana has seen 82,042 confirmed cases of Covid-19, with 3,445 deaths. Jefferson parish and Orleans parish – which are home to the city of New Orleans and the wider metropolitan area have seen the highest number of cases in the state. 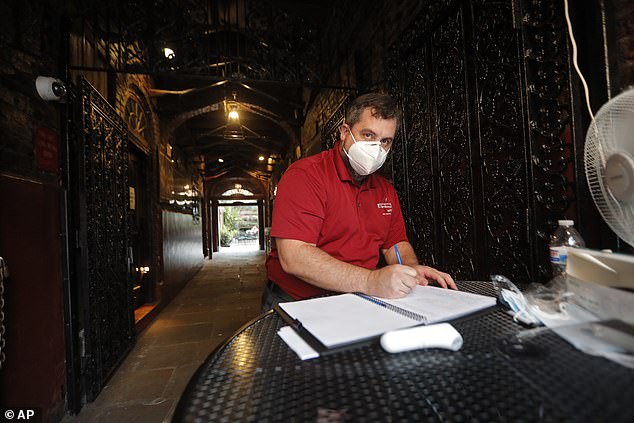 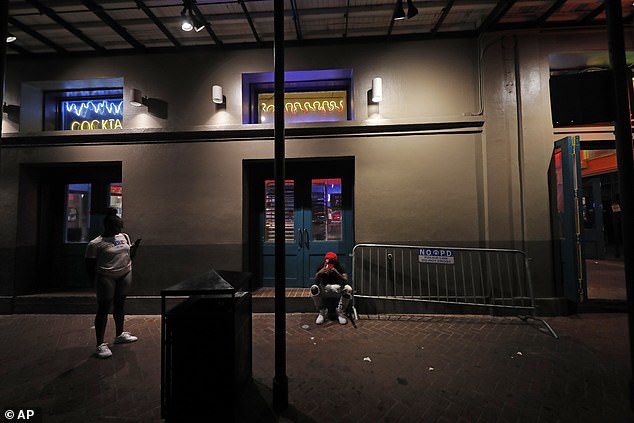 Pictured: People are seen outside a bar with no customers on Bourbon Street in the French Quarter of New Orleans, Tuesday, July 14, 2020

By June 20, Covid-19 hospitalizations had fallen in the New Orleans area had fallen to fewer than 70, from a high of more than a 1,000 in April.

Statewide hospitalizations that had peaked at around 2,000 in April had fallen well below 600 in June, according to Dr. Joseph Kanter, director of the state health department for New Orleans.

Furthermore, as the state increased testing numbers, the percentage of positive tests statewide went from around 7 percent in early July to as high as 18 percent at one point last week. During that time, the positivity rate rose from 5 percent to 10 percent in New Orleans.

Speaking in a recent press conference, Edwards said: ‘We have lost all the gains made in June and are seeing some numbers that rival our peak back in April.’