Nicola Sturgeon faces a no confidence vote despite being cleared of breaching ministerial code over the Alex Salmond case as a Holyrood inquiry is expected to find she did mislead MSPs today.

Yesterday James Hamilton, a former director of public prosecutions in the Republic of Ireland, cleared the Scottish First Minister of breaching the ministerial code over in her actions following harassment allegations made against her predecessor, Alex Salmond.

The former first minister won a payout of more than £500,000 after the Court of Session in Edinburgh ruled that the way the Scottish Government dealt with those complaints was unlawful.

But a committee of the Scottish Parliament set up to consider her Government’s botched handling of the complaints against Mr Salmond is now due to report. 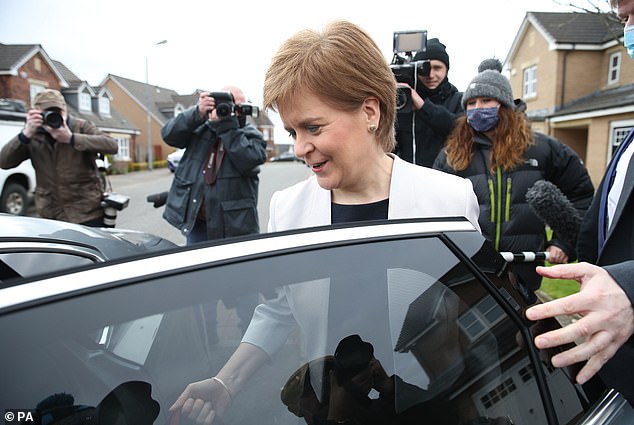 Nicola Sturgeon was yesterday cleared of breaching ministerial code of her actions relating to complaints against Alex Salmond, but today a separate Scottish Parliamentary committee will publish its own findings 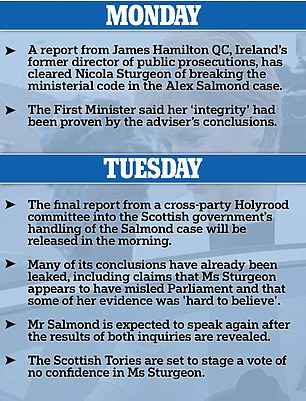 Leaks from the Committee on the Scottish Government’s Handling of Harassment Complaints have already suggesting it has concluded it is ‘hard to believe’ Ms Sturgeon did not know of concerns about her predecessor’s behaviour before November 2017, as she has said.

Mr Hamilton’s report, published yesterday, concluded that the ‘First Minister did not breach the provisions of the ministerial code’ in her behaviour.

The Holyrood inquiry into the Scottish Government’s unlawful investigation of Alex Salmond will publish its findings this morning.

The findings are separate from Mr Hamilton’s and are expected to conclude that the First Minister misled the Scottish Parliament.

The Committee on the Scottish Government Handling of Harassment Complaints will formally publish its full report at 8am, more than two years after it was first established.

The cross-party inquiry was set up after a successful judicial review by Mr Salmond resulted in the Scottish Government’s investigation being ruled unlawful and ‘tainted by apparent bias’ in 2019. 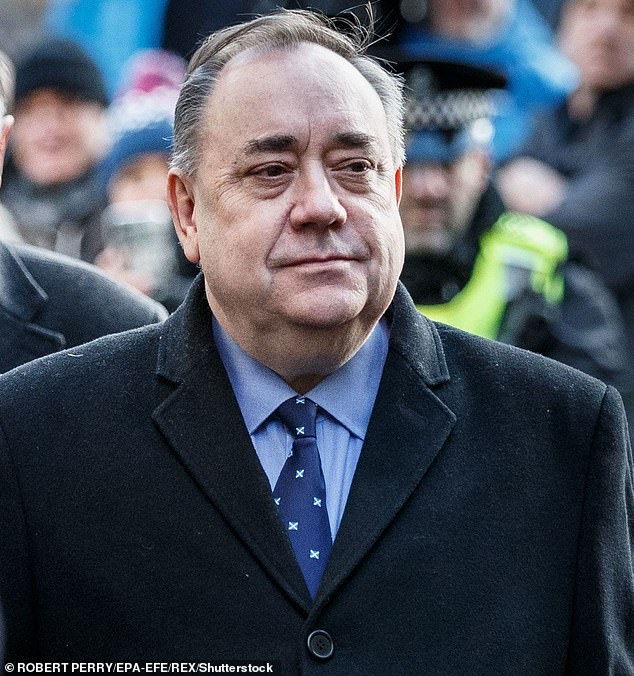 Former Scottish First Minister Alex Salmond won a payout of more than £500,000 after the Court of Session in Edinburgh ruled that the way the Scottish Government dealt with harassment complaints against him was unlawful

A majority of MSPs on the committee are also understood to have concluded that Ms Sturgeon misled them if she did have knowledge of the concerns.

When the leaks of the committee’s findings emerged Ms Sturgeon, who spent eight hours being questioned by MSPs on the matter earlier this month, accused some members of having made their minds up before she had ‘uttered a single word of evidence’.

She dismissed the ‘very partisan leak’ as being ‘not that surprising’.

However Scottish Tory leader Douglas Ross insisted it was ‘up to the Scottish Parliament to decide if the First Minister has been misleading’.

And while he said he respected Mr Hamilton, he added his party could not agree with his assessment that the First Minister had not breached the ministerial code.

Mr Ross said: ‘The First Minister has been given a pass because it has been judged her ‘failure of recollection’ was ‘not deliberate’.

‘I respect Mr Hamilton and his judgment but we cannot agree with that assessment.’

However Ms Sturgeon should survive if the Tories do push ahead and bring a vote of no confidence in her to Holyrood. 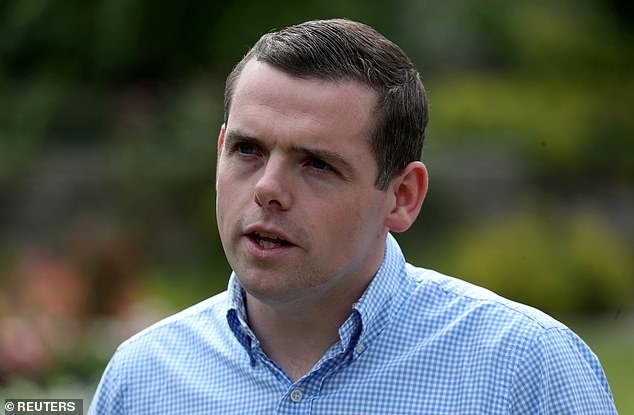 That is because the Scottish Greens have already said they will not support such a motion, claiming the Conservatives have shown ‘no interest in establishing the truth’ by lodging the motion before the report was published.

Speaking on Monday afternoon after Mr Hamilton’s report was published, Ms Sturgeon said: ‘I look forward, if that’s the right expression, to the committee report being published tomorrow and we will look at that in great detail.

‘But I cannot escape the conclusion that there are some members of that committee, because their public utterances show this, that decided before a single word of evidence had been taken that I was guilty of something and nothing was going to remove them from that view.’

A motion of no confidence, tabled by the Scottish Conservatives, is due to be debated and voted upon on Tuesday afternoon.

Ms Sturgeon added: ‘I’m confident that vote will express confidence in me.

‘Remember that the Tories said they would have a confidence vote in me before I uttered a single word of evidence before the parliamentary inquiry.

‘They have decided on this issue a long time ago this is a political stunt being brought forward by the Tories tomorrow.’

Accusations that Nicola Sturgeon may have breached the ministerial code have been investigated by an independent adviser to the Scottish Government.

James Hamilton QC has been looking into whether the First Minister broke the rules governing ministerial conduct and misled the Scottish Parliament.

On Monday, he concluded that Ms Sturgeon did not breach the ministerial code in relation to the four allegations he investigated.

His work is separate from that of a committee of MSPs who have been examining the Government’s handling of harassment complaints made against former first minister Alex Salmond.

– How did the investigation start?

Following Mr Salmond’s successful legal challenge of the Scottish Government’s procedure, which led to him being awarded £512,250 for legal costs, Ms Sturgeon referred herself to the independent adviser on the ministerial code.

That adviser, Mr Hamilton, is a former director of public prosecutions in Ireland.

His investigation was paused in early 2019 to avoid prejudicing criminal proceedings brought against Mr Salmond and was delayed again by the pandemic, before resuming in August 2020.

– What has the inquiry been looking at?

A key part of the investigation is the timing of when Ms Sturgeon knew about the complaints made against Mr Salmond and if parliament was properly informed.

Ms Sturgeon initially told Holyrood she first heard of the sexual misconduct complaints against her predecessor when they met at her home on April 2 2018.

But it later emerged she discussed the allegations with Mr Salmond’s chief of staff, Geoff Aberdein, in her Holyrood office four days earlier.

Ms Sturgeon said she had forgotten the contents of her discussion with Mr Aberdein and it was her meeting with Mr Salmond which was ‘seared on her memory’.

Mr Hamilton examined the allegation that parliament was misled and found there was no breach of the ministerial code.

He also said that her failure to record meetings and telephone conversations with Mr Salmond and others did not amount to a breach of the code.

– What could the implications be?

A vote of no confidence in the First Minister, tabled by the Conservatives, is due to go ahead in the Scottish Parliament on Tuesday.

However, it is likely to fail as the Scottish Greens have said they will vote with the SNP.

Scottish Greens co-leader Patrick Harvie said some of the committee members had ‘shown utter contempt for the women involved, and for the rules of the Scottish Parliament, by leaking confidential evidence and their own conclusions’.

He said: ‘If anyone’s resignation is still needed, it is these MSPs who should step down now, and who should not be candidates for re-election in May.’

– What has Nicola Sturgeon said?

Ms Sturgeon has previously said she does not believe she has breached the ministerial code.

On Monday, she welcomed Mr Hamilton’s report, saying it was ‘comprehensive, evidence-based and unequivocal’.

– How have other parties reacted?

Scottish Conservative leader Douglas Ross has said the First Minister is not ‘free and clear’, noting the Holyrood committee is due to publish its report on Tuesday morning.

Mr Ross said: ‘I respect Mr Hamilton and his judgment but we cannot agree with that assessment. Nicola Sturgeon did not suddenly turn forgetful.

‘She is not free and clear. The First Minister promised to ‘respect the decisions’ of both inquiry reports, not to pick and choose which one suits her and try to discredit the other.’

He said there was still ‘overwhelming’ evidence that Ms Sturgeon misled parliament, pointing to Mr Hamilton’s statement that ‘it is for the Scottish Parliament to decide whether they were in fact misled’.

Scottish Labour leader Anas Sarwar said: ‘Unlike others, we have been clear from the outset that we would not prejudge the outcome of this inquiry.

‘We acknowledge the findings of the report and we await the publication of the committee inquiry and whether its members conclude the First Minister misled parliament.

‘What is clear is that this entire process has deeply damaged public trust in our politics at a time of national crisis, and there are absolutely no winners today.’