Home » World News » ‘No problems, none’: Putin appears to back off threats as Sweden, Finland prepare to join NATO

‘No problems, none’: Putin appears to back off threats as Sweden, Finland prepare to join NATO

Stockholm/Kyiv: Vladimir Putin has appeared to climb down from Russia’s objections to Sweden and Finland joining NATO, saying Moscow had no issues with them entering the US-led military alliance they now aim to join in reaction to his invasion of Ukraine. 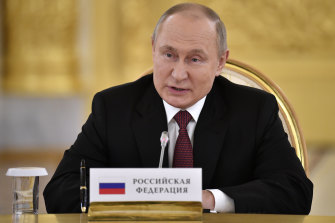 Russian President Vladimir Putin addresses a meeting at the Kremlin on Monday.Credit:Alexander Nemenov/Pool Photo via AP

She warned that the Nordic country would be in a “vulnerable position” during the application period and urged her fellow citizens to brace themselves for the Russian response.

However, Putin has reacted by saying NATO’s expansion itself was not a threat. He had previously warned that Moscow would take action if NATO were to move more troops or hardware onto the territory of its new members – steps Finland and Sweden have both already ruled out.

“As far as expansion goes, including new members Finland and Sweden, Russia has no problems with these states – none,” Putin said.

“And so in this sense there is no immediate threat to Russia from an expansion to include these countries.”

The comments appeared to mark a major shift in rhetoric. For decades, Moscow has cast NATO enlargement as a direct threat to Russia’s security, including citing it as a justification for the invasion of Ukraine itself.

Just hours before Putin spoke, Russia’s deputy foreign minister, Sergei Ryabkov, said Finland and Sweden were making a mistake that would have far-reaching consequences: “They should have no illusions that we will simply put up with it.”

Putin’s own spokesman Dmitry Peskov, asked last Thursday if Finland joining NATO was a threat to Russia, had said: “Definitely. NATO expansion does not make our continent more stable and secure.”

But faced with the prospect that his own actions may cause the very expansion of NATO he had opposed, Putin appears to have decided not to object directly. 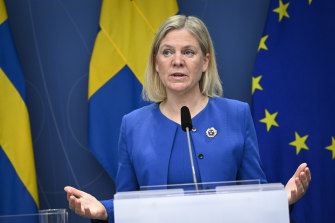 He did, however, say NATO enlargement was being used by the USin an “aggressive” way to aggravate an already difficult global security situation, and that Russia would respond if the alliance moves weapons or troops forward.

“The expansion of military infrastructure into this territory would certainly provoke our response. What that (response) will be – we will see what threats are created for us,” Putin said. “Problems are being created for no reason at all. We shall react accordingly.”

Both non-aligned throughout the Cold War, Finland and Sweden say they now want the protection offered by NATO’s treaty, under which an attack on any member is an attack on all.

“We are leaving one era behind us and entering a new one,” Andersson said, announcing plans to formally abandon the militarily non-aligned status that has been a cornerstone of Swedish national identity for more than 200 years.

Swedish and Finnish officials have said Putin has only himself to blame for their decisions to join NATO. Former Swedish Prime Minister Carl Bildt tweeted a picture of a mock award for Putin as “NATO salesman of the year”.

Kjell Engelbrekt, professor of political science at the Swedish Defence University, said Putin appeared to be trying to “limit the damage”, though it was too early to say whether he now accepted NATO’s expansion as “a fait accompli”.

“Given that Russian military resources are fairly stretched or even overstretched at the present time … they could not match an intensification of the rhetoric with the stationing and distribution of more capabilities in this part of Europe anyway.”

Finnish and Swedish accession would radically redraw the strategic map of northern Europe, giving NATO control of nearly the entire Baltic Sea coast and more than doubling the alliance’s land borders with Russia.

Nordic NATO members Norway, Denmark and Iceland said they were ready to assist Finland and Sweden “with all necessary means” during the application process.

France said it stands ready to support Finland and Sweden politically and through “enhanced military interactions”, and protect the country against any threats or aggressions.

Turkey’s President Recep Tayyip Erdogan said that Turkey would not approve Finaland Sweden’s bids to join NATO, calling Sweden a “hatchery” for terrorist organisations, and adding it had terrorists in its parliament.

“Neither of these countries have a clear, open attitude towards terrorist organisation,” Erdogan said. “How can we trust them?”

He said that Swedish and Finnish delegations should not bother coming to Ankara to convince it to approve their NATO bid.

Get a note directly from our foreign correspondents on what’s making headlines around the world. Sign up for the weekly What in the World newsletter here.