Kim Jong Un’s feeling all white! North Korean leader ditches his usual dull attire as he observes social distancing during meeting, weeks after he was rumoured to be seriously ill

North Korean leader Kim Jong Un appeared in high spirits as he ditched his usual attire and wore a white shirt during a meeting of the politburo of the country’s Workers Party.

Kim Jong-Un observed social distancing from his colleagues, despite North Korea having no official confirmed cases of Covid-19.

Other party officials did not appear to keep their distance and were seated directly next to each other.

The meeting comes weeks after it was claimed that the North Korean despot was gravely ill. 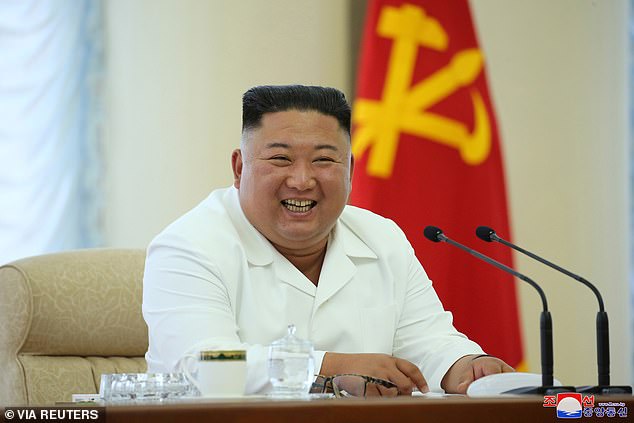 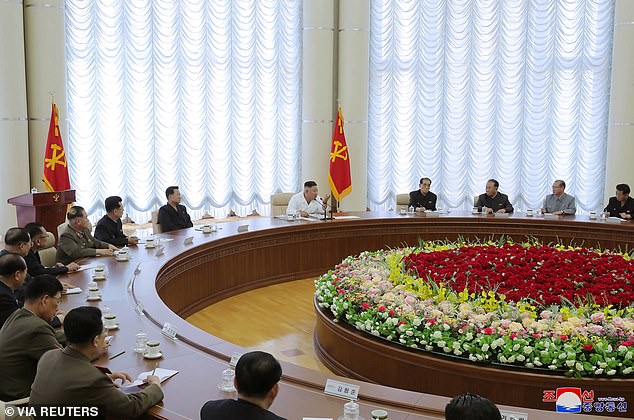 The two-day politburo meeting comes at a time of economic uncertainty amid the global COVID-19 pandemic that is putting additional pressure on the North’s economy, already battered by international sanctions aimed at stopping its nuclear program

Kim disappeared from state media for weeks, sparking a flurry of speculation about his health and whereabouts, and worry about prospects for the nuclear-armed state in the event of an unexpected succession.

But on Saturday, May 2, North Korean media published photographs of Kim at a ribbon-cutting ceremony for the inauguration of a fertiliser plant.

Images released by North Korea’ state-run news agency on Monday showed Kim to be in good health as he sat for the 13th Political Bureau meeting, which comes as the North ramped up pressure on South Korea over defector activities.

North Korea is facing a time of economic uncertainty amid the global COVID-19 pandemic that is putting additional pressure on the North’s economy, already battered by international sanctions aimed at stopping its nuclear program.

Kim did not mention the North’s increased criticism of South Korea or of the North Korean defectors who call it home.

For several days, North Korea has lashed out at South Korea, threatening to close an inter-Korean liaison office and other projects if the South does not stop defectors from sending leaflets and other material into the North.

On Monday, North Korea did not answer a routine daily liaison phone call from South Korean officials for the first time in since 2018, South Korea’s Unification Ministry said.

The ministry has said South Korea remains committed to following inter-Korean agreements, and it is considering proposing legislation to ban groups from sending material into North Korea. 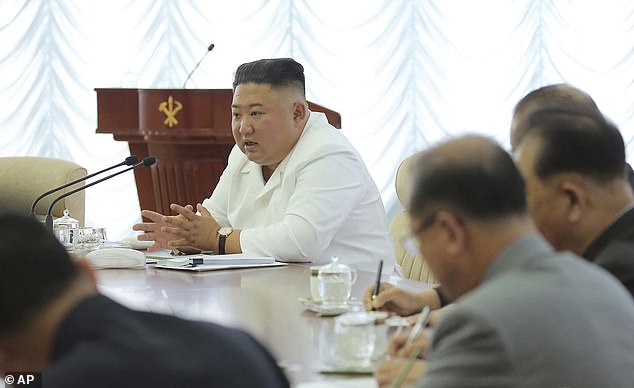 KCNA’s report on the 13th political bureau meeting focused on domestic economic issues, including the chemical industry and fertilizer production as ‘a major thrust front of the national economy.’

The meeting also emphasized construction of residential houses as a way to better North Korean’s standard of living.

Kim has made an unusually small number of outings in recent months, with his absence from a major holiday prompting speculation about his condition, as Pyongyang has stepped up measures against the COVID-19 pandemic.

Although North Korea says it has no confirmed cases of the novel coronavirus, South Korea’s main intelligence agency has said an outbreak there cannot be ruled out.