Home » World News » Not a record anyone wants: Calls to Lifeline hit a daily high

Not a record anyone wants: Calls to Lifeline hit a daily high

Calls to Lifeline's 24-hour crisis support and suicide prevention hotline have broken the organisation's 57-year record, with 3326 calls on Tuesday, a 30 per cent increase on the same day last year.

The fallout from a global recession could cause a mental health pandemic that will last longer than the physical health pandemic, Lifeline's chairman John Brogden writes in an opinion piece published in the Herald on Thursday to mark World Suicide Prevention Day and RU-OK? Day. 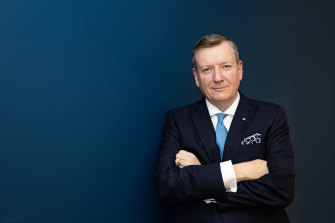 "When people lose their job, they lose their family, they lose their home and they risk losing their life," said Mr Brogden, who is also chief executive of Landcom. The former senior Liberal MP describes himself as a 51-year-old man with depression and suicidal ideation that he lives with every day. "I'm not normal. What the hell is normal anyway?" he asks.

The federal government's National Suicide Prevention Adviser, Christine Morgan, urged the public to trust their intuition and get in contact with anyone they are worried about.

"How often has our 'gut' feeling told us that something is not quite right with someone we care about, but we avoided the conversation for fear of getting it wrong, or not knowing how to respond if the answer is, 'No, I’m actually not OK'?"

Lifeline recommends asking directly and unambiguously, "Are you thinking about suicide?" It advises: "Don’t be afraid to do this, it shows you care and will actually decrease their risk because it shows someone is willing to talk about it."

In his article, Mr Brogden said JobKeeper had "literally been a lifesaver for millions of Australians".

"When and how it ends will have major consequences for mental health and suicide. The dislocation of bushfires and COVID have been enormous and the scale of the trauma for many is yet to land," he writes.

Lifeline receives about a million calls a year, but calls have risen 25 per cent so far this year.

"It was not a record we want to keep breaking," Mr Brogden said.

Daily calls to Lifeline are rising 20 per cent to 30 per cent during the pandemic.Credit:Lifeline

Lifeline usually receives more calls during prevention campaigns such as RU OK? Day but this year the calls were even higher.

Lifeline broke monthly records from the beginning of the pandemic in March to June when it received 90,000 calls a month. About half of callers want to talk about the impact of COVID-19 and while calls have increased across the country, calls from Victoria rose nearly 28 per cent to between 800 and1000 a day. Calls to Lifeline's bushfire hotline have spiked too as back-burning begins.

In a podcast called Holding on to Hope, former firefighter Ross Beckley said a call from a mate – who wouldn't give up asking him how he was – saved his life. In the podcast produced by Lifeline, Mr Beckley said constant exposure to death at work damaged his mental health.

'The culture was harden up, buttercup.'

The culture was "harden up, buttercup, have a cup of concrete attitude. It was perceived as being a sign of weakness".

"He said, 'What do you mean you've had enough?' And he kept prodding me and pushing me and said, 'You're not contemplating taking your life?' I said, 'Yeah, I am actually'.

Mr Beckley's mate told him to sit tight for five minutes while he arranged for someone to go to him.

"I sat there and waited for the phone call within exactly five minutes to the dot, again, like that brochure, tick. There was a phone call and he'd arranged it within five minutes."

Ms Morgan said most statistics highlight the number of people who die by or attempt suicide each year, but that was only part of the picture.

"There are many more people who live with suicidal ideation and who experience suicidal distress. Behind each of those numbers is a person, a journey, and a network of other people," Ms Morgan said.