NSW District Court Judge Peter Zahra has died suddenly after he was taken to hospital last week to be treated for a medical episode.

The experienced judge was appointed to the bench in 2007 and oversaw numerous high-profile cases during his career, including Hey Dad! star Robert Hughes, collar bomb hoaxer Paul Douglas Peters and was overseeing the ongoing embezzlement trial of Guy Sebastian’s former manager Titus Day. 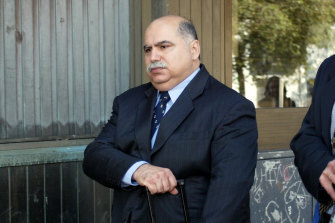 Judge Peter Zahra SC, pictured in 2003, when he was a senior public defender.Credit:Jon Reid

He also served as a senior public defender from 2001 to 2007, appearing in major murder trials and drug trials. One of his clients was Kathleen Folbigg, who was jailed in 2003 over the deaths of her four children.

Judge Zahra experienced a sudden medical episode at his Lilyfield home in Sydney’s inner west at about 8am on Thursday.

He was taken to Royal Prince Alfred Hospital, where he died on Sunday.

On Monday, the jury in the Day trial was brought into court to be told Judge Zahra had passed away. The jurors gasped, with one woman offering her condolences to his friends and family.

Judge James Bennett told the jurors that Judge Zahra was “a very good friend” and everyone in the court was feeling his loss. He said the trial would continue with a different judge next week.

In a statement, Judge Zahra’s family said the much-loved husband and father “passed peacefully on Sunday 8 May 2022 surrounded by his family”.

“Dad was a special soul and touched the lives of everyone he met,” they said on Monday.

“We have received many lovely messages and memories that demonstrate the type of person he was, he had a big heart and wanted to see everyone achieve more than what they ever thought possible.

“In honour of our Dad and his life, we encourage everyone to have a hot chocolate and share a dad joke in his honour. Those who knew him would know he loved a good (bad) joke!

“We would ask that you please respect our privacy at this time and provide us the space to celebrate the life of a man who will create a void that will be difficult to fill.”

Day’s trial will resume with the same jury on May 16.