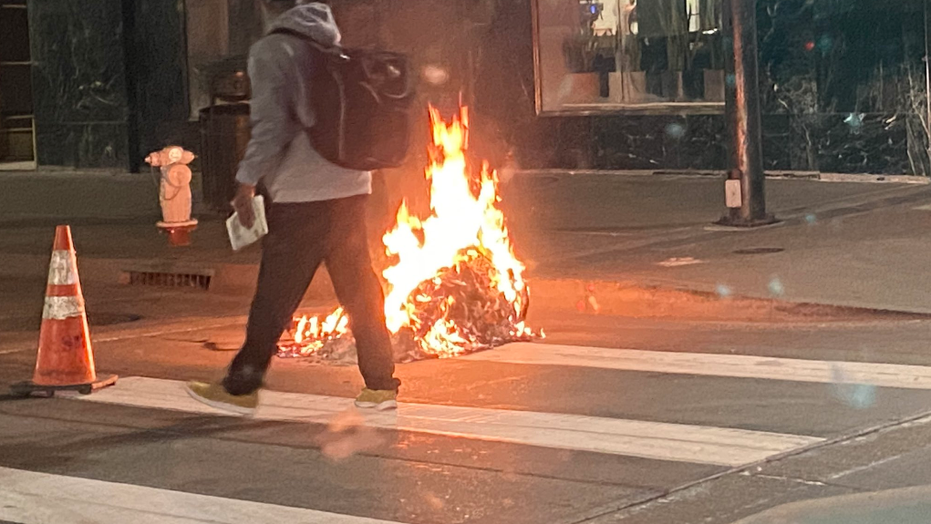 Rioters in Oakland, Calif., set fire to a downtown courthouse, smashed windows and threw bottles at law enforcement officers Wednesday night in the latest evening of unrest in the Bay Area city.

Earlier, hundreds marched to demand justice for Jacob Blake, a 29-year-old Black man who was recovering in a hospital after being shot in the back Sunday by police in Kenosha, Wis.

The Oakland protest started peacefully but turned violent deeper into the night. Police said they received reports of people igniting fireworks, breaking store windows and setting trash cans on fire during a demonstration.

"Burn it down!" members of the crowd were heard chanting.

"Some within the crowd are disruptive and have no regard for others' safety," police wrote.

Around 11:30 p.m., Oakland Police shared video of a fire inside the Alameda County Superior Courthouse. The building's glass doors appeared to be shattered and police advised residents to stay away from the area.

"Violent protesters vandalized and started a fire at the Alameda County Superior Court. @OaklandFireCA is on scene. Please stay clear of the area," police said.

Just before 11 p.m., police said demonstrators temporarily shut down traffic on Interstate 580. After exiting at the Grand Avenue off-ramp, authorities added, violent protesters continued to throw bottles and other objects at officers.

Police said "agitators" in the crowd also tried to set a business on fire, but officers and fire crews intervened. Multiple windows were smashed along Broadway and at a business in the Lake Merrit neighborhood.

Authorities pleaded with the crowd to stop throwing items and using laser pointers against officers near police headquarters at 7th and Washington streets.

Early in the evening, police asked demonstrators to respect the community and protest peacefully. They had also asked for help from organizers to facilitate safe areas for the demonstration.

Some local residents wished the same.