Jayland Walker, 25, was shot dead by police in Akron, Ohio after officers tried to stop him for a traffic violation

Police have released heartbreaking body camera footage of the moment a black man from Ohio was shot by police at least 60 times.

Jayland Walker, 25, was killed by Akron police after officers tried to stop him for a traffic violation while he was driving on June 27.

The shocking footage, made public on Sunday, showed multiple officers approach Walker’s vehicle and open fire as he fled on foot. The hail of bullets sounded like ‘a whole brick of fireworks going off,’ the family’s attorney alleged.

Video from the scene also showed a gun on the front seat of Walker’s car, contradicting earlier reports that the 25-year-old had been unarmed.

The cameras captured what appeared to be a flash of a gun coming from Walker’s car during the chase. Akron police previously claimed Walker had fired a gun at officers who were pursuing him.

Mylett said officers rendered aid to Walker as soon as gunfire ceased, but he still died at the scene.

Eight cops were directly involved in the shooting. Mylett said they have been placed administrative leave while the Bureau of Criminal Investigation probes the incident.

The shooting was the latest in a spate of killings of black men by law enforcement in the United States that critics say are unjustified, including the 2020 murder of George Floyd in Minneapolis that ignited global protests against police brutality and racial injustice. 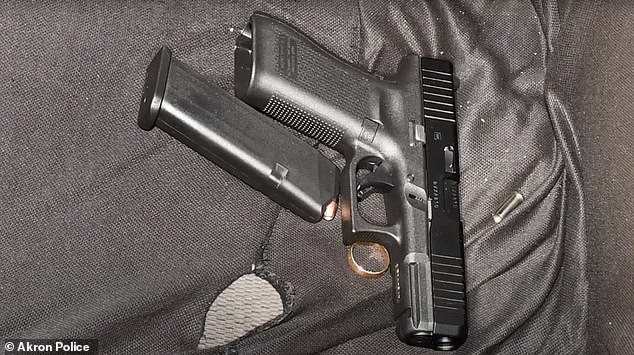 Video from the scene showed a gun on the front seat of Walker’s car, contradicting earlier reports that the 25-year-old had been unarmed

The first video showed cops pursuing Walker’s silver Buick on Route 8 around 12.30am in Akron’s North Hill neighborhood. They attempted to pull him over for a traffic and equipment violation.

The video showed Walker’s car taking an onramp and a flash of light that Mylett said appeared to be a flash of a gun coming from the driver’s side of Walker’s car.

A second camera recorded officers saying they heard at least one shot being fired from Walker’s vehicle. The cops follow Walker off Route 8 and continue the pursuit on the city streets.

Walker slowed down and jumped out of the car before it came to a full stop. Video then shows the 25-year-old exiting the passenger side door in a ski mask and running off.

Multiple officers run after Walker, who seemingly looked over his shoulder, while cops opened fire at him.

Mylett claims he watched the video at least 40 times and stated there are still photos showing Walker apparently reach for his waistband, turn towards cops and move his arm forward.

DailyMail.com cannot verify Mylett’s statements as Walker’s face and body were blurred out in the video at the request of his family.

Cops were pursuing Walker’s silver Buick on Route 8 around 12.30am on June 27 in Akron’s North Hill neighborhood 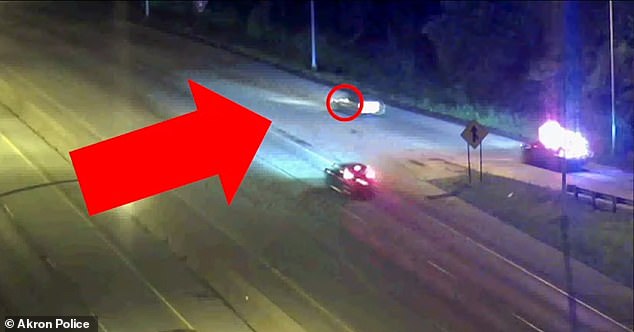 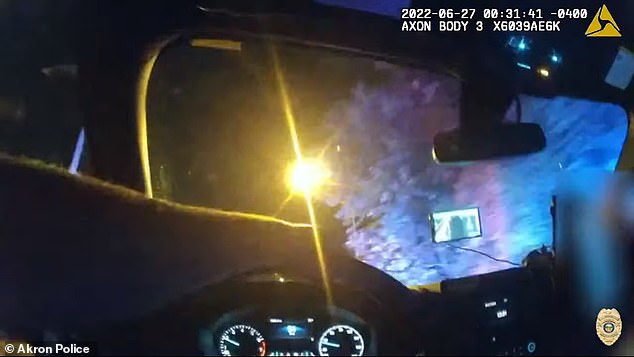 Officers were recorded saying they heard at least one shot being fired from Walker’s vehicle. The cops follow Walker off Route 8 and continue their pursuit on the city streets

Reporters asked Mylett if officers overreacted when they open fire on Walker.

‘It was difficult to watch, and shocking,’ Mylett said Sunday, adding: ‘I’m not going to pass judgment’ until the investigation is completed.

He called for patience as the investigation continue and reiterated that any time a cop opens fire, they must ‘articulate what specific threats they were facing.’

‘When an officer makes the most critical decision in his or her life as a police officer, it doesn’t matter where in the country this happens, when they make that most critical decision to point their firearm at another human being and pull the trigger, they’ve got to be ready to explain why they did what they did,’ the chief said.

‘They need to be able to articulate what specific threats they were facing, and that goes for every round that goes down the barrel of their gun.’

Akron Mayor Daniel Horrigan also commented on the footage, saying: ‘The video is heartbreaking, it’s hard to take in.’

Attorney Bobby DiCello, who represents Walker’s family, described the video as ‘brutal’ in comments published on Saturday by the Akron Beacon Journal.

He said Walker’s relatives worried that protests this weekend could turn violent.

‘We’re all bracing for the community’s response, and the one message that we have is the family does not need any more violence,’ DiCello said.

Officials joined the family on Sunday, calling for peaceful demonstrations as furious residents take to the streets.

‘I praise and thank the Walker family for calling for peace,’ Mylett said. He then addressed the 25-year-old’s relatives directly: ‘I cannot imagine the sense of loss, the pain you are going through right now.

‘I want to personally thank you for the way in which you have been dealing with this situation. You have asked for peace in an environment that is rife for aggression and violence.’ 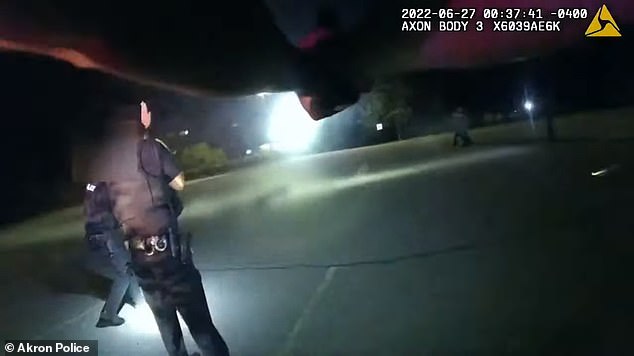 The shocking footage, made public on Sunday, showed multiple officers approach Walker’s vehicle and open fire as he fled on foot 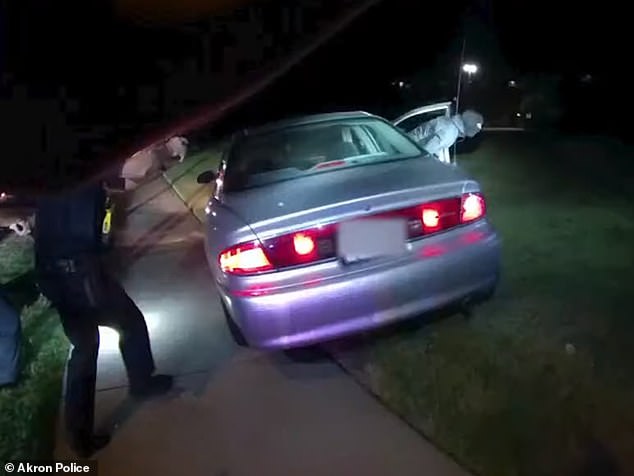 The hail of bullets sounded like ‘a whole brick of fireworks going off,’ the family’s attorney said 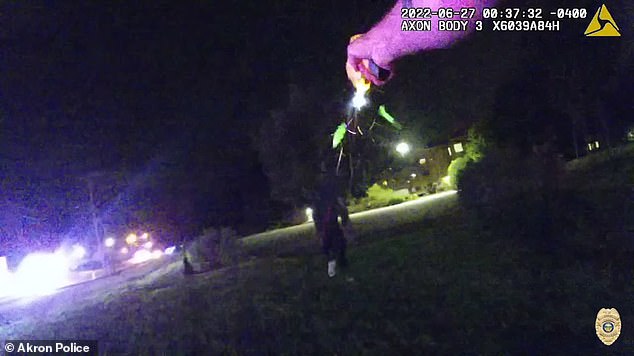 ‘Protest is a way of crying,’ Roderick Pounds Sr., pastor of the Second Baptist Church in Akron, said during a prayer rally there on Saturday after he was permitted to see the video prior to its being made public.

Pounds declined to describe in detail ‘the graphic video the world is about to see,’ but he called the footage ‘shocking,’ saying it showed Walker posed no threat when he was shot down in a manner the pastor likened to a ‘massacre.’

Officials have said the deadly confrontation began when officers tried to stop Walker for a traffic violation while he was driving early Monday morning. Walker fled, according to the Akron Police Department, which said officers reported a gun being fired from Walker’s vehicle.

After several minutes Walker exited his vehicle and ran, while officers chased him on foot and fired at him, saying he presented a ‘deadly threat,’ the police department said in a statement on Tuesday.

Walker was pronounced dead in the parking lot where he fell. Police representatives did not immediately respond to requests for comment on Saturday.

DiCello said his team has not seen any evidence Walker fired a weapon and that police body-camera footage showed him running with his back to officers when they gunned him down.

‘He is just in a down sprint when he is dropped by I think the count is more than 90 shots,’ DiCello told the Beacon Journal. ‘Now how many of those land, according to our investigation right now, we’re getting details that suggest 60 to 80 wounds.’

It was not clear how many bullets struck Walker because bullets can cause wounds both entering and exiting the body, DiCello said.

Television station WJW-TV said a preliminary report from the medical examiner’s office found Walker sustained multiple gunshot wounds to his head, torso and legs, and that a weapon was recovered from a car by Ohio’s Bureau of Criminal Investigation, though it did not specify which car.

Pounds told WEWS that Walker ‘did not have a weapon when he was shot. It was in his car.’

Compounding the tragedy, according to the Beacon Journal, Walker’s fiance had died in a car accident last month, though WJW cited attorneys for his family as saying Walker had no intention of harming himself or others when he was killed.

The officers involved in the shooting have been placed on administrative leave during an investigation, the department’s statement said. (Reporting by Jason Lange and Jonathan Landay in Washington; Additional reporting by Steve Gorman in Los Angeles; Editing by Daniel Wallis)