Once cast as Duterte enemy, Filipino weightlifter raises spirit of a nation

Singapore: Two years ago, Hidilyn Diaz earned the ire of President Rodrigo Duterte when she spoke about a lack of support for athletes by the Philippines government.

The presidential palace responded by including her in a so-called “oust Duterte matrix” in which it accused high-profile Filipinos of collaborating in a plot against the leader. 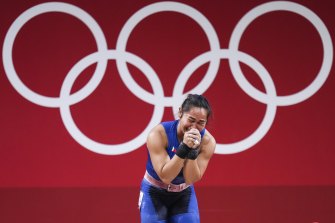 Hidilyn Diaz of the Philippines cries after winning the women’s 55kg weightlifting in Tokyo.Credit:Getty Images

A stunned Diaz laughed off the baseless claim at the time, although later admitted she feared for her life.

Now, as the 30-year-old weightlifter is celebrated as the Philippines’ first ever Olympic gold medallist, she has been lauded by the Malacanang, as the palace is known.

“The entire Filipino nation is proud of you,” Duterte’s spokesman said in a congratulatory message released soon after her victory on Monday night.

Diaz’s triumph brought to an end the Philippines’ 97-year wait for Olympic gold after first having an athlete compete at the Games in 1924.

It was all the more impressive given she had spent the past few months training out of a makeshift gym behind a house in her pre-Olympics base in Malaysia, hemmed in by COVID-19 restrictions.

The Air Force sergeant will receive 33 million pesos ($A890,000) and a house from the government as an additional reward as she joins boxing icon Manny Pacquiao on the top shelf of the Philippines’ all-time sports stars.

The historic victory is also a welcome lift to a country of 108 million people that has been floored by the pandemic.

In south-east Asia, only Indonesia has endured a greater overall toll than the 1.55 million virus cases and more than 27,000 deaths in the Philippines. Aside from the health impact, the economic consequences have been stark, with a contraction by 9.5 per cent in 2020, the country’s worst performance since 1947 , followed by another 4.2 per cent slide in the first quarter of this year.

Only hours before Diaz broke the second of two Olympic records in Japan, for the clean-and-jerk as well as the snatch, Duterte was taking centre stage delivering his final State of the Nation address. 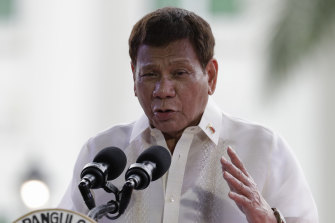 Philippine President Rodrigo Duterte is in his final year in office.Credit:AP

The 76-year-old’s single six-year term ends next year but he vowed to continue an internationally condemned anti-drugs crackdown that has officially killed more than 6000 but which rights groups estimate has left many more than that dead.

Departing International Criminal Court special prosecutor Fatou Bensouda last month called for a full investigation into alleged extrajudicial killings in the war on drugs since Duterte took office in 2016. He has refused to cooperate.

“I would never deny and the ICC can record it: Those who destroy my country, I will kill you,” he said in his last speech to the Congress.

“And those who destroy the young people of our country, I will kill you. I will destroy you because I love my country.”

Also attacking police officers accused of supplying weapons to communist insurgents, Duterte ordered that “if you see them walking around, kindly shoot them dead”.

While his term is up next year, his political future may last longer as he leaves open running for the vice-presidency, possibly on a ticket with his daughter Sara, the mayor of Davao City on the southern island of Mindanao.

In another sporting twist, Pacquiao, who is preparing to re-enter the ring for the first time in two years for a world title fight in Las Vegas next month, is also reportedly gearing up for a presidential tilt after five years as as senator.

The 42-year-old fighter was an ally of Duterte’s but has also become a target of the President in the past month after alleging government agencies were beset with corruption.

If he runs on on a rival ticket to Duterte, it shapes as a captivating heavyweight battle.

For the moment, though, there is Diaz’s win in the women’s 55kg category to savour.

Hailing from Zamboanga, at the south-west corner of Mindanao, the daughter of a tricycle driver turned fisherman has become a new national hero, just as the Philippines needed one.

“I went through a lot to get here. The pandemic, everything,” she said.

“This is worth it. Proud to be Pinoy!”

Get a note direct from our foreign correspondents on what’s making headlines around the world. Sign up for the weekly What in the World newsletter here.