One in 10 trainee teachers fails required literacy and numeracy tests

Almost one in 10 trainee teachers fails to meet literacy and numeracy standards required for graduation, prompting an internal government report to call for the tests to be held at the beginning of the degree so students don’t waste their time. 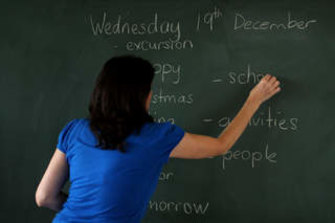 “By following ITE [initial teacher education] students across all [five] possible test attempts, we can expect that, ultimately, 91 per cent of students meet both standards,” says a report prepared by consultancy dandolopartners for the federal Department of Education.

The report, finished in May and obtained by the Herald under freedom of information laws, also found a correlation between the ATAR of an incoming group of students and their LANTITE results, although it was a weak one.

“Of the 18 [higher education providers] with an advertised ATAR of 70, the rates of ITE students meeting the standards range from 58 per cent to 94 per cent,” it said.

The report recommends that students sit the test before they begin the degree rather than keeping it as a requirement for graduating.

It argued the change would raise the public status of the teaching profession and let universities focus on teaching rather than getting students ready for the LANTITE. It would also stop some students wasting years and money.

The change would be supported by students themselves. “There was unanimous support from the nine focus groups we completed, including from ITE students who had easily met the standard and those who were not able to meet the standard,” it said.

Only 10 per cent of students strongly agreed an entry test would put them off studying teaching.

“ITE students who were, or had struggled to meet the standard, and resent the uncertainty this presented about their figure … would have preferred to establish whether the test was a barrier for them before investing time and money,” it said.

Education Minister Dan Tehan said LANTITE was a matter for Education Council and would be considered in December.

“The Commonwealth commissioned the LANTITE report and we think some of its proposals have merit," he said.

Rachel Wilson, a senior lecturer in education at the University of Sydney, supported turning the LANTITE into an entry requirement, saying it would weed out students who would have difficulty in meeting degree requirements.

“That test is a very low bar because it doesn’t match the international benchmark for standards for entry into teacher education,” she said. “We do need to apply a higher standard. But if the LANTITE is to be preserved, having it at the beginning because it is a low hurdle is a better idea.”

But Mary Ryan, president of the NSW Council of Deans of Education, said the LANTITE disproportionately affected students with English as a second language or Aboriginal students.

“We want a diverse teaching profession to reflect the diversity in our classrooms,” she said. “Of course, we want them to have good literacy and numeracy. We should be looking at other ways to demonstrate that.”

Professor Ryan also said asking students to pay for a test when they had no guarantee of a place in the course would put some of them off choosing teaching. “We have a critical teacher shortage; this would make it worse,” she said.

“My recommendation would be if they don’t want to have LANTITE as a graduation requirement, that it should be required earlier in their program. They could require it by the end of the first year, that would make more sense.”