Brighton: Thousands of British petrol stations have ran dry as motorists scrambled to fill up after the post-Brexit truck driver shortage disrupted the fuel supply.

The Petrol Retailers Association, which represents almost 5,500 independent outlets, said about two-thirds of its members were reporting that they had sold out their fuel, with the rest “partly dry and running out soon”. BP said nearly a third of its British petrol stations had run out of the two main grades of fuel.

Association chairman Brian Madderson said the shortages were the result of “panic buying, pure and simple”. 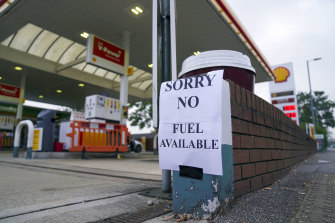 Up to two-thirds of independent petrol stations in the UK have run dry. Credit:PA

The panic buying has forced the government to suspend competition laws to allow firms to work together to ease the shortages, while The Guardian is reporting that Prime Minister Boris Johnson is considering calling on the army to deliver fuel to the pumps.

Motorists across the country queued, some for hours, to fill up with fuel after oil firms reported the driver shortage was causing transport problems from refineries to stations.

Some operators have had to ration supplies and others have closed.

“With the intense demand seen over the past two days, we estimate that around 30 per cent of sites in this network do not currently have either of the main grades of fuel,” BP, which operates 1,200 petrol stations in Britain, said in statement.

“We are working to resupply as rapidly as possible.”

The fuel panic comes as Britain faces several crises: an international gas price surge that is forcing energy firms out of business; a related shortage of carbon dioxide that threatens to derail meat production; and a shortage of truck drivers that is playing havoc with retailers and leaving some shelves bare. 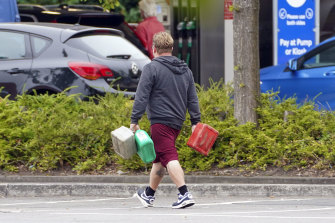 UK Transport Minister Grant Schapp said the shortages were purely due to panic-buying.Credit:PA

In response, business minister Kwasi Kwarteng said he was suspending competition laws to allow firms to share information and coordinate their response.

“This step will allow government to work constructively with fuel producers, suppliers, hauliers and retailers to ensure that disruption is minimised as far as possible,” the business department said in a statement.

Transport minister Grant Shapps had earlier appealed for calm, saying the shortages were purely caused by panic buying and that the situation would eventually resolve itself because fuel could not be stockpiled.

“There’s plenty of fuel, there’s no shortage of the fuel within the country,” Shapps told Sky News.

Earlier, Shapps said the truck driver shortage was down to COVID-19 disrupting the qualification process.

Others pinned the blame on Brexit and poor working conditions forcing out foreign drivers.

The government on Sunday announced a plan to issue temporary visas for 5,000 foreign truck drivers.

But business leaders have warned the government’s plan is a short-term fix and will not solve an acute labour shortage that risks major disruption beyond fuel deliveries, including for retailers in the run-up to Christmas. 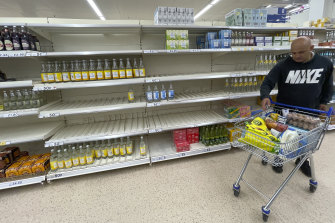 The freight crisis has led to shortages of basic goods on UK supermarket shelves. Credit:AP

Shapps called the panic over fuel a “manufactured situation” and blamed it on a hauliers’ association.