Some Melbourne suburbs don't have enough space in their parks for people to socially distance properly, an issue that could come to a head when restrictions move to the next step next week.

From Monday groups will still be banned from visiting homes or pubs, but under the COVID-19 plan outlined by Premier Daniel Andrews five people will be able to sit outdoors together. 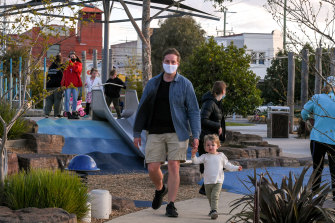 Kent Whalley and his son Heath at a busy Booran Reserve in Glen Huntly on Monday.Credit:Eddie Jim

PhD candidate Julianna Rozek, from the RMIT Centre for Urban Research, said social distancing could be undermined if people who are still unable to move out of their five-kilometre bubble are forced to go to overcrowded parks to meet their friends and relations.

"No one really sets out to break the social distancing rules," Ms Rozek said. "But that might be the outcome."

Social distancing requires Victorians to stay 1.5 metres away from people outside of their household and Melbourne residents are only allowed outdoors for two hours of exercising or socialising each day.

In the inner-west, Kingsville has 1.56 square metres of parkland per person and Seddon has 2.95.

Kent Whalley took his son Heath to Booran Reserve in Glen Huntly on Monday afternoon, and said he wouldn't go back there on a weekend because it was so busy.

The VPA data includes parks, gardens, sport and recreational fields, but does not include national parks, meaning the map is mostly useful for the inner-suburbs. It also does not include beachfronts. 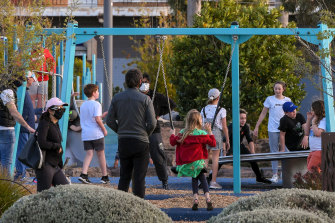 Ms Rozek said research had tended to focus on the distance between residents and their nearest park, but she said every person needed more parkland while they were prevented from seeing friends and family elsewhere.

"Under coronavirus, we're living in this whole new world where maybe the amount of open space per person is also important," she said.

"In Melbourne, if you're in an inner suburb, you're much more likely to live within 400 metres of your local park than if you're in the outer suburbs. 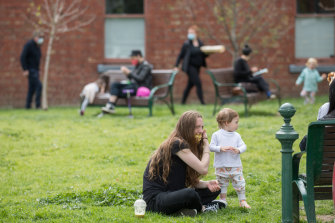 Condell Reserve in Fitzroy, a suburb that has only 2.02 square metres of park per person.Credit:Jason South

"But this has sort of switched that around. You might live close to a park, but if there's a lot of other people, maybe there's not enough space in that park any more."

She found that suburbs with the least parkland per person were more likely to have apartment living.

Ms Rozek started comparing the data after Mr Andrews released Victoria's road map out of lockdown and she wondered whether there would be enough parkland to go around.

She suggested opening school playgrounds and golf courses to the public for temporary relief during lockdown restrictions.

Darebin Council has already opened Northcote Golf Club for general use during the stage four rules, while playing golf is banned. 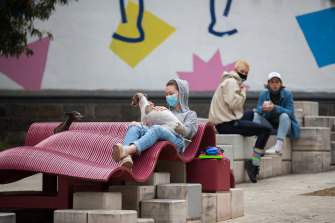 Peel Street Park in Collingwood is one of the few parks in the suburb.Credit:Jason South