People raise money for father who punched boy, 12, who threw an egg

Well-wishers raise money to cover court costs of father, 27, who was fined £100 after punching a 12-year-old boy who threw an egg at his ill child

Well-wishers have started a fundraiser to cover the court costs of a father who was fined £100 after punching a 12-year-old boy who three an egg at his ill child.

Vincent Peters, 27, had been driving on East Prescot Road near Alder Hey Children’s Hospital in Liverpool on August 1 last year when the boy targeted his blue Skoda and hit his young child, who had been suffering from seizures, in the process.

In response he got out of his car and dragged the adolescent to the ground and punched him, something the child said left him bruised, terrified and scared he was about to be kidnapped.

Peters was handed a community order, and told to pay compensation, prosecution costs and a victim surcharge as a result of the attack, along with carrying out various rehabilitation activities.

But now another father has started a JustGiving page to raise money for him. Anthony Nolan said he was ‘not taking sides’ but could understand Peters’ actions.

He wrote: ‘I don’t condone violence other than to protect yourself and people you care for. I’m not saying what he did was right or wrong but as a parent I understand.’

Mr Nolan set up the JustGiving page a few days ago and has so far raised £60 of his £1,900 target. That target figure dwarfs the total of £280 Peters must pay the court towards compensation, costs and a surcharge.

However, Mr Nolan said it was also to cover lost earnings from the 200 hours of community service and 20 rehabilitation days Peters must complete as part of his 18 month community order.

He was handed that sentence by a bench at Liverpool Magistrates’ Court earlier this month after pleading guilty to assault.

Tanya Burridge-Burley, prosecuting, told the court the victim, who cannot be named because of his age, was one of a group of kids throwing eggs on East Prescot Road. 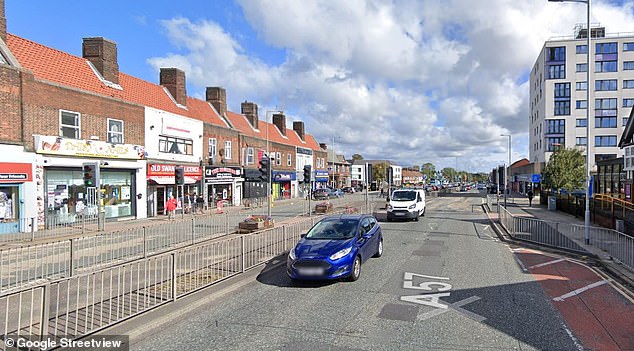 The incident happened on August 1, 2021, as Peters drove down Prescot Road in Liverpool

She said the boy then threw eggs at Peters’ blue Skoda as it came down the road close to the junction with Leinster Road.

Peters then got out of the car and started shouting at the group of kids and ran after the boy. Ms Burridge-Burley said: ‘The defendant has then stopped the victim by grabbing him and pulling him to the floor and then assaulted him by punching him.’

She said Peters then walked the boy around the corner onto Broadgreen Road and hit him again before the 12 year old ran off. Peters was apprehended after the boys’ friends took pictures of Peters’ car, meaning he could be identified.

The court heard the boy had a lump and bruises after the assault and told police he felt scared and that he thought he might be kidnapped. The 27 year old, who has no previous convictions for violence, initially pleaded not guilty but admitted assault by beating in June.

Christopher Bivon, defending, said Peters was appalled by the way he acted and said ‘the red mist descended’ due to concerns about the health of his child.

Mr Bivon said the child had been in and out of hospital for days due to seizures believed to have been caused by high temperatures. As a result, Peters had left the window of his car down and said he then saw one of the eggs hit his child, making him fear another seizure could be triggered.

Mr Bivon said: ‘I think the backdrop of what happened in hospital, in addition to the fear of a further seizure, meant the red mist has descended and he has done what he has done. He is disgusted at what he did. He clearly is remorseful and he clearly accepts that that behaviour is never acceptable.’