Phoenix police released body camera footage that shows the moments leading up to officers fatally shooting a suspect who told them he was holding a gun behind his back.

Officers responded around 9 p.m. on Dec. 28 to a call from a woman who said her ex-boyfriend was harassing her, Sgt. Mercedes Fortune said in a briefing the department posted Wednesday on YouTube.

The woman identified the ex-boyfriend as 30-year-old Jordan Crawford and told the 911 dispatcher he had been violent toward her in the past, Fortune said. 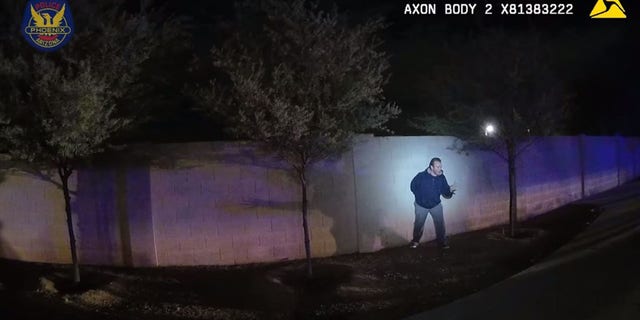 Jordan Crawford, 30, told officers he had a gun and gave a countdown before pulling his hand from behind his back, police said.
(Phoenix Police Department)

Officers arrived and found Crawford wandering the apartment complex where the woman lived.

The body camera video, which was edited by the Phoenix Police Department, shows an officer confront Crawford and ask what he has behind his back.

Crawford ignored the officer’s commands to show his hands and continued to walk backward toward the street, police said. He can be seen with his right hand behind his back near the rear waistband of his pants.

“Jordan, don’t do this!” an officer yells. “Jordan, show us your hands right now, brother!”

As Crawford walked backward across the street, police said the officers were able to contain him when he reached the sidewalk on the other side, police said.

“Who’s going to kill someone tonight?” Crawford says. “You decide!” 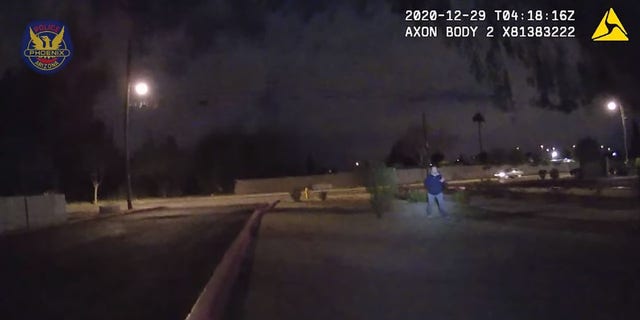 Crawford ignored officers and continued to walk backward with his hand behind his back. He can be heard several times saying, "Who’s going to kill someone tonight?"
(Phoenix Police Department)

Officers can be heard pleading with Crawford, who then begins to countdown from five. When Crawford reaches one, he quickly moves his hand from behind his back and officers fire a volley of shots.

No gun was found on Crawford. He was taken to a hospital where he later died.

The five officers involved in the incident were from the Cactus Park Precinct. None of the officers were injured.

Police said the incident is the subject of an internal and criminal investigation.