PIERS MORGAN: Dithering, buck-passing Mayor Khan’s shameful failure to protect his transport workers and passengers is an absolute disgrace – and threatens to destroy London as one of the world’s great economic forces

On March 3, London Mayor Sadiq Khan appeared on Good Morning Britain and declared about coronavirus: ‘There is no risk in using the Tube or buses or other forms of public transport.’

At the time, Britain hadn’t suffered a death from the disease, but we had seen over 30 cases reported, and we’d also seen what carnage it had already caused in many other countries.

So COVID-19, the most dangerous threat to public health in 100 years, was here and working its lethal havoc.

Yet the Mayor of our largest and most densely populated city exuded supreme confidence that there was nothing to worry about.

On March 3, London Mayor Sadiq Khan appeared on Good Morning Britain and declared about coronavirus: ‘There is no risk in using the Tube or buses or other forms of public transport’

‘How do you know that, Mr Mayor?’ I retorted. ‘No disrespect, but how on earth can you say that in a city of 12 million people there is no risk given that we now know it’s here and it’s beginning to spread here and we know that in other countries the spread has been ferocious, places like Italy and Iran. How can you say as Mayor of London there is no risk to people using public transport?’

‘Because I rely upon the advice I receive from Public Health England and the Chief Medical Officer,’ he replied, ‘and the advice is you’re not going to catch it if you wash your hands regularly and if you use public transport, on the Tube on a daily basis there are five million journeys, on our buses six million journeys. The evidence we have so far is it’s possible to contain it.’

None of this made any sense.

‘You seem remarkably relaxed about big numbers of people being in close proximity to big numbers of other people,’ I persisted, ‘when in Italy they’ve now cancelled big football matches… and when the evidence from other places is that once this thing starts in a country it moves very fast.’

‘Because it’s really important we take the advice we’re given,’ he replied, almost parrot-like, passing the buck again, like our Government has done throughout this crisis, to the scientific and medical experts.

‘We’ve had no fatalities in our country,’ Khan explained, and I would say to GMB viewers to have confidence in our experts.’ 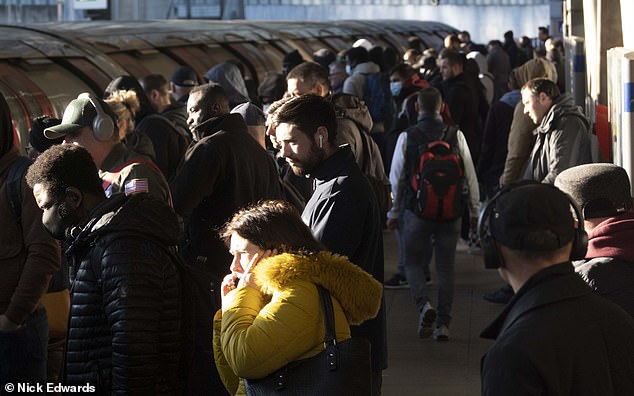 I then asked him if was shaking hands with people, given the previous day the Health Secretary Matt Hancock had said it was OK, and Prime Minister Boris Johnson had proudly boasted of doing so.

‘You say there’s no risk to people using public transport in confined areas around lots of people,’ I said, ‘yet here’s you, the London Mayor, saying you’re no longer shaking people’s hands because you’ve taken a view that there is a risk?’

‘The advice is that it’s perfectly safe to use the Tube and public transport,’ the mayoral parrot replied.

Or as he would doubtless say, like all good buck-passers, the experts on whom he was relying were wrong.

Today, just ten weeks later, the UK’s official coronavirus death toll stands at over 33,000 and this is just what the government’s admitting to – the real number, of coronavirus-related fatalities, based on recorded excess deaths, is now estimated at over 60,000. 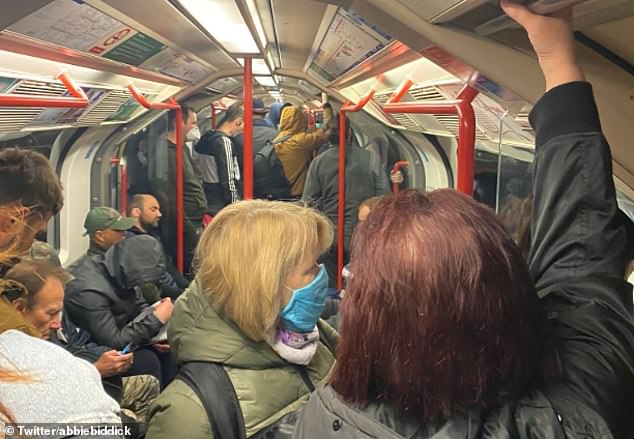 Of the official figure, 5,697 deaths occurred in London which has been the grim epicentre of the crisis.

And yesterday, Transport Secretary Grant Shapps revealed that 42 Transport for London workers have died with the virus.

This total includes at least 28 bus drivers, and a woman ticket collector who was spat on at Victoria station by a man claiming to be COVID-positive.

So, it turns out that there was a very grave and deadly risk to using public transport, and not just to the scandalously under-protected workers.

Many commuters will have been infected on Tubes and buses, before and after March 3, and many of those who got infected will have sadly died.

Inevitably, these will have included NHS and social care worker heroes, nearly 300 of whom have lost their lives, that rely on public transport to get to work.

Yet they’d all been assured by their Mayor there was no risk of catching coronavirus.

On April 8, Mayor Khan appeared again on Good Morning Britain, after it emerged that nine bus drivers had died and we had just conducted a harrowing interview with the widow of one of them demanding to know why he hadn’t been properly protected.

Once again, Khan – whose own father was a bus driver – hid behind the ‘experts’, claiming that Public Health England had advised PPE should only be used in care settings. ‘Their advice, and I have to follow their advice, is quite clear,’ he said, ‘transport workers should not be wearing PPE.’

I exploded. ‘Where does common sense come into this? All I hear is politicians hiding behind experts. If nine bus drivers in London have died from coronavirus because they don’t have adequate personal protective equipment, if I was London mayor, I’d be making damn sure they got it and I wouldn’t be taking any advice from anybody else, I’d be trusting my gut instinct. These people need better protection, they are dying.’

Mayor Khan continued to ‘listen to the experts’, bus drivers continued to have inadequate PPE, and as a result, the number of them who’ve died has now trebled.

This is all a complete disgrace, and shocking negligence by the Mayor.

As are the ridiculous scenes we’ve seen on public transport this week after Boris Johnson dumped his ‘STAY AT HOME’ message to beat the virus and urged millions of non-essential workers to go back to work – despite there still being no vaccine or therapeutic drugs to beat COVID-19.

Putting aside the recklessness of this move, which I fear is the same mistake made in 1918 when the world tried to return to normality too early after the first wave of the Spanish Flu only for the second wave to be massively more devastating, it obviously demanded the Mayor of London step up to the challenge of ensuring there were enough buses and trains for people to use them whilst maintaining social distancing – and enough transport police to enforce it. 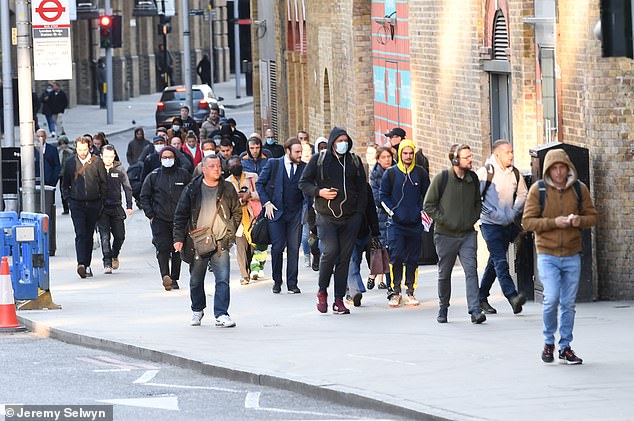 Instead, we’ve seen commuters packed in like sardines on Tubes and huddling off buses like lemmings charging off a cliff together.

Nobody’s maintaining social distancing and nobody’s trying to make them.

So, the virus will run riot again, infections will rise, and so will deaths.

This, again, is a disgrace.

Why has it been so chaotic?

Because Mayor Khan slashed the number of services, as he has done throughout the crisis.

And he has been refusing to restore them to the required capacity unless the government agrees to a £2 billion emergency bailout for TFL today.

So, he has been deliberately risking yet more lives as he effectively tries to blackmail Boris Johnson.

Khan insists he’s doing so because he’s worried about the health of transport workers and passengers.

”It’s deeply upsetting,’ he told LBC, ‘The reality is that every time somebody interacts with somebody on the street, in a shop or on a train it can increase the spread. That’s why we are urging people to stay at home’. 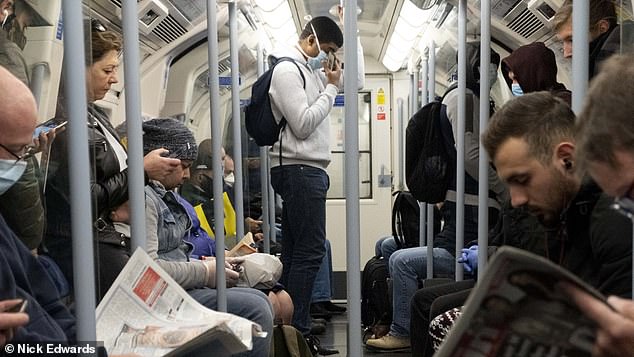 Has Mayor Khan finally worked out that bleedingly obvious fact for himself – or did he have to wait for the ‘experts’ to tell him?

As always, he is blaming anyone but himself for the ongoing catastrophe on London’s public transport.

Khan said the government wasted six weeks when the virus first broke out.

‘We should have planned better and made decisions better and been ahead of the curve,’ he said. ‘Rather than responding to things that are happening.’

Yes, Mayor Khan, YOU should.

On Tuesday, the man who assured us all there was ‘no risk’ from coronavirus if you use public transport, tweeted: ‘I can’t emphasise how important it is that we avoid public transport as much as possible.’

What a staggering, jaw-dropping lack of self-awareness.

The internet keeps receipts, Mayor Khan, and so do TV shows like GMB.

The reason people kept using public transport when the virus first erupted in London is because YOU told them there was no risk.

The reason people have been risking their lives without social distancing on public transport this week is because YOU slashed services.

The reason this matters so much is that if YOU can’t protect commuters, and companies can’t get their staff to work safely, then there will a stampede to work-for-home, London it will lose its middle classes and tax base and quickly become a hollowed out financial wasteland.

And the reason the Mayor’s deep sudden concern for people’s health grates so badly with me is because so many have needlessly died as a result of his abject complacency and failure to adequately protect them.

I can’t emphasise how much of a dithering disaster Mayor Khan has been during this crisis.

And I didn’t need an expert to tell me.