The ultimate covidiots: Scuffles break out as police lead away anti-lockdown activists in Hyde Park as hundreds attend protests against restrictions across the UK

Masses people have gathered in London’s Hyde Park, including the brother of Jeremy Corbyn, to protest against the coronavirus lockdown while brandishing signs reading ‘I will not be masked.’

Piers Corbyn, 73, was seen surrounded by police officers as he made his way through the crowds, getting involved in the action and making his voice heard.

He was later seen holding a sign which read: ‘End lockdown now – Free NHS to save those it’s left behind.’

As tensions quickly began to simmer scuffles could be seen breaking out, as protestors took exception to the responses of police officers and clashed as handcuffs were produced.

So far six arrests have been made by police forces, who continue to patrol the area.

Standing close together near Speaker’s Corner, several held placards and banners including slogans such as ‘freedom over fear’ as police, including some on horseback, looked on.

As people started to come together at midday on Saturday, initial figures were at the three dozen mark as police moved in to keep the scene under control.

With numbers mounting, police continued in their efforts to disperse the crowds and keep people moving, in order to avoid the dangerous scenario of a mass gathering in close proximity. 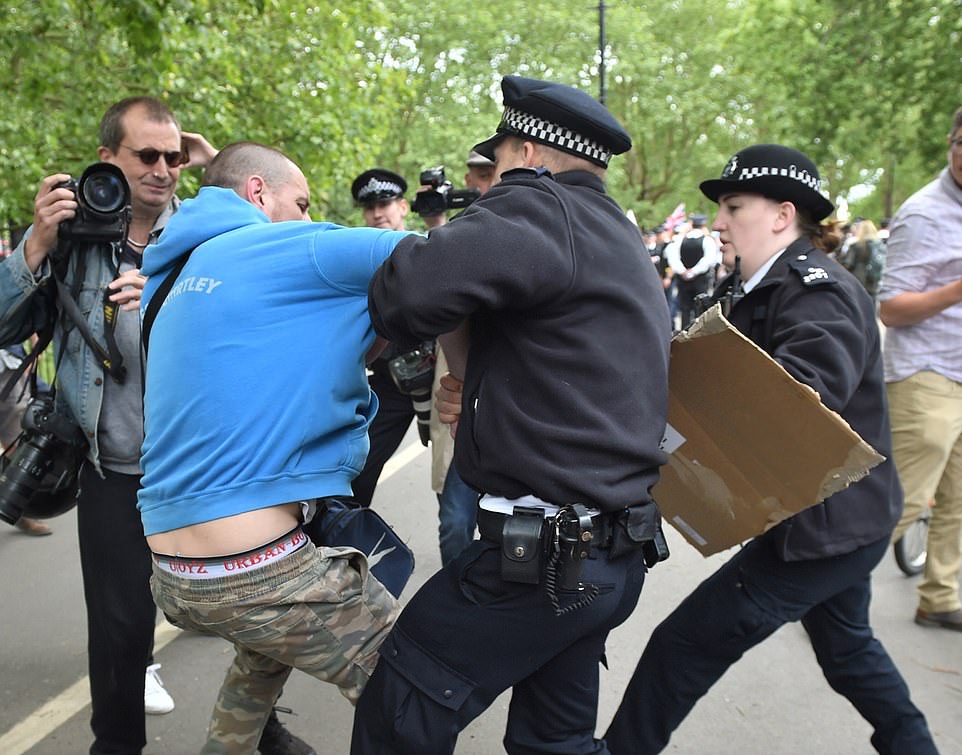 Protestors clashed with police as tensions quickly simmered in Hyde Park, with individuals expressing their displeasure 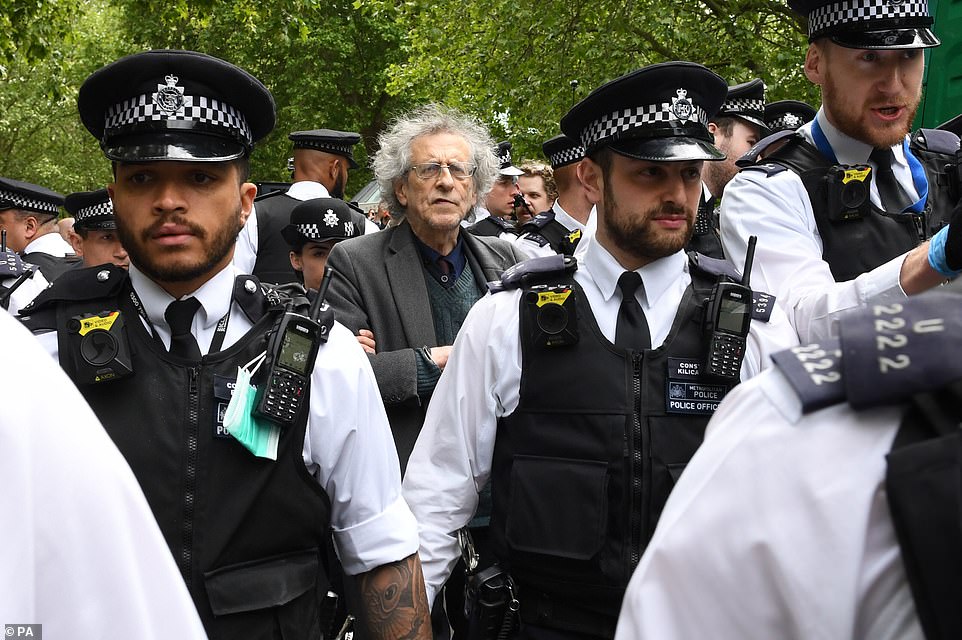 As large crowds gathered to protest against the lockdown regulations, the brother of former Labour leader Jeremy Corbyn, Piers, was seen among the action 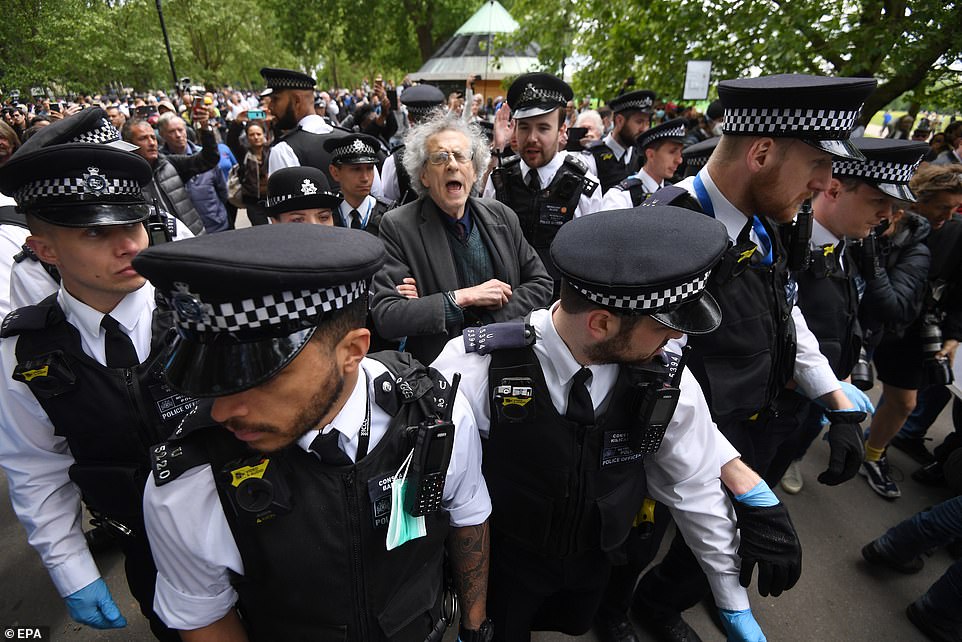 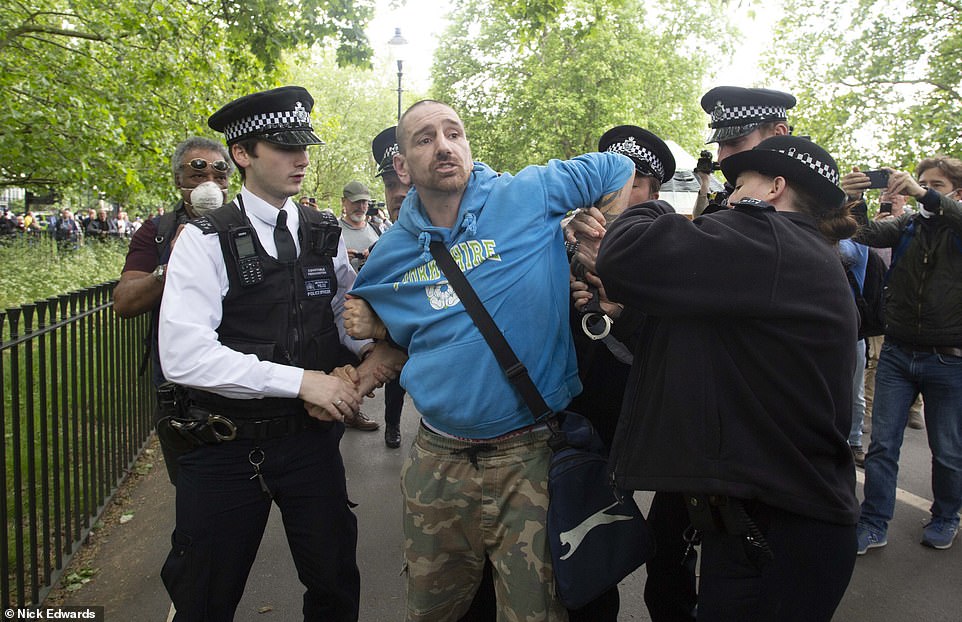 One man needed several police officers to bring him under control, while attempting to get him in handcuffs 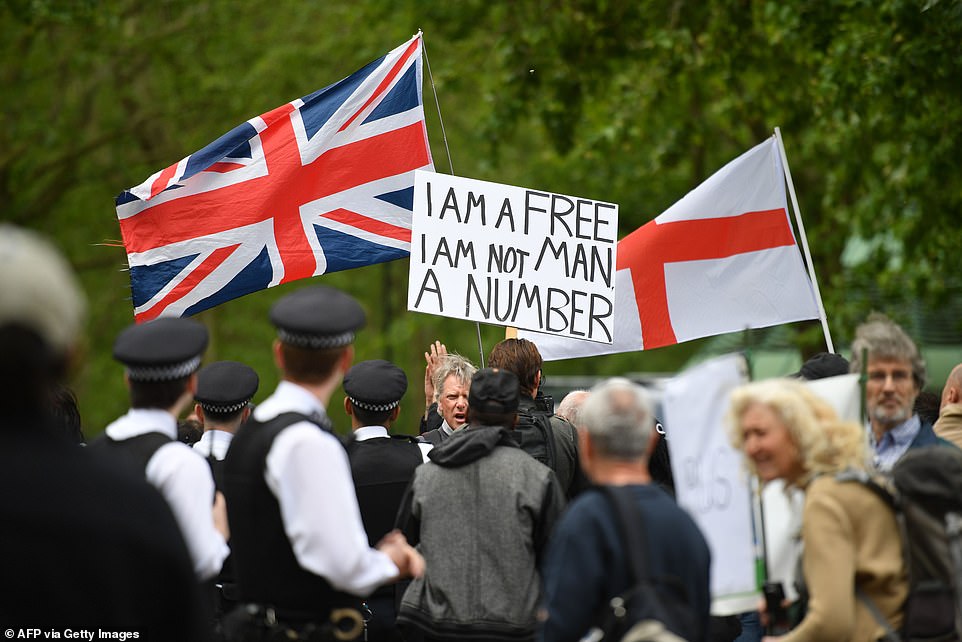 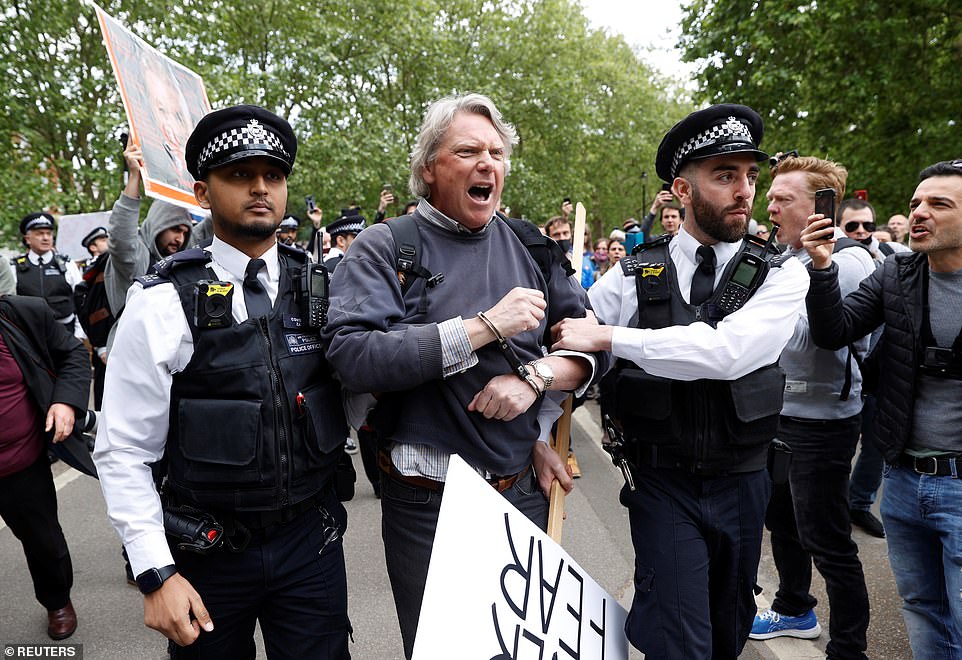 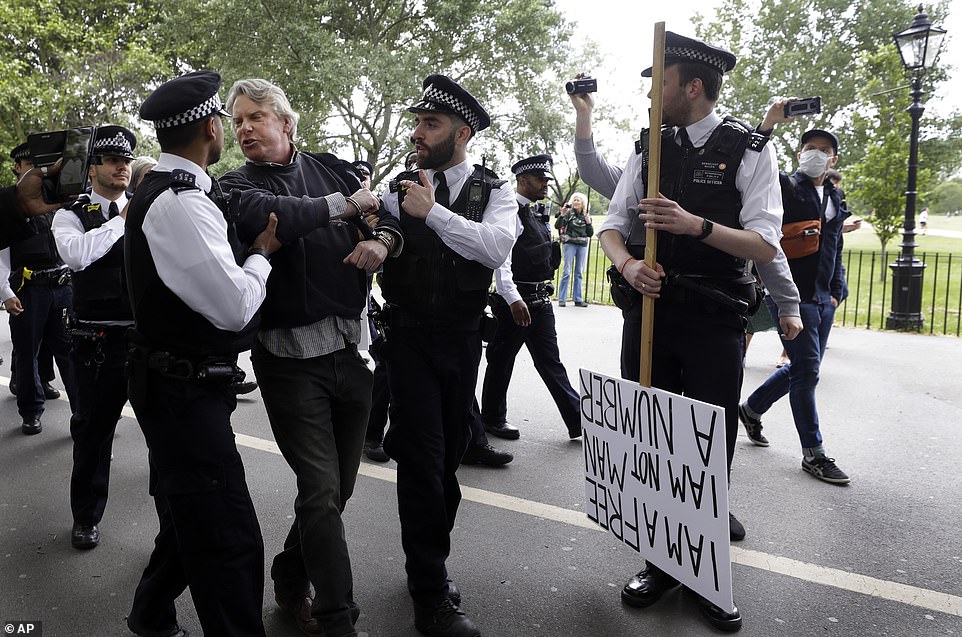 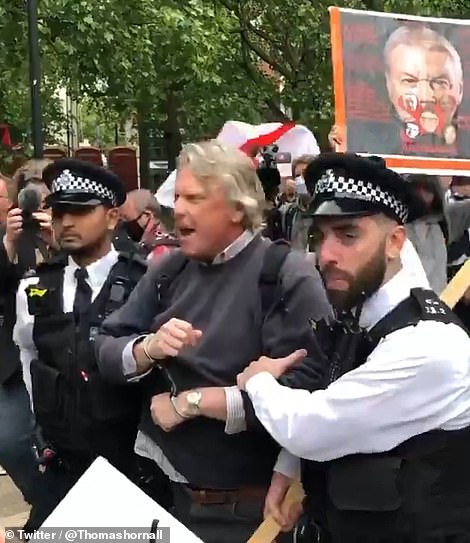 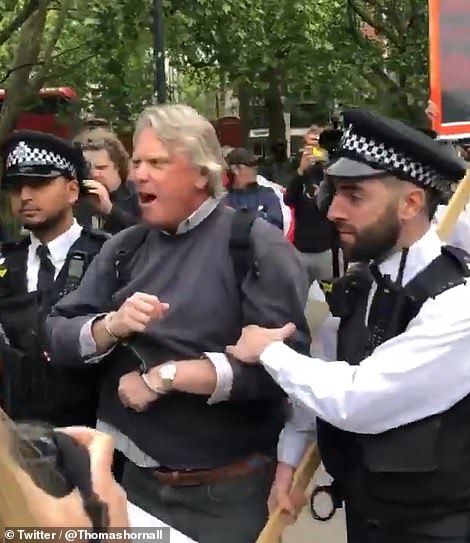 Video footage showed the man being marched through the London park, as bystanders applauded his efforts 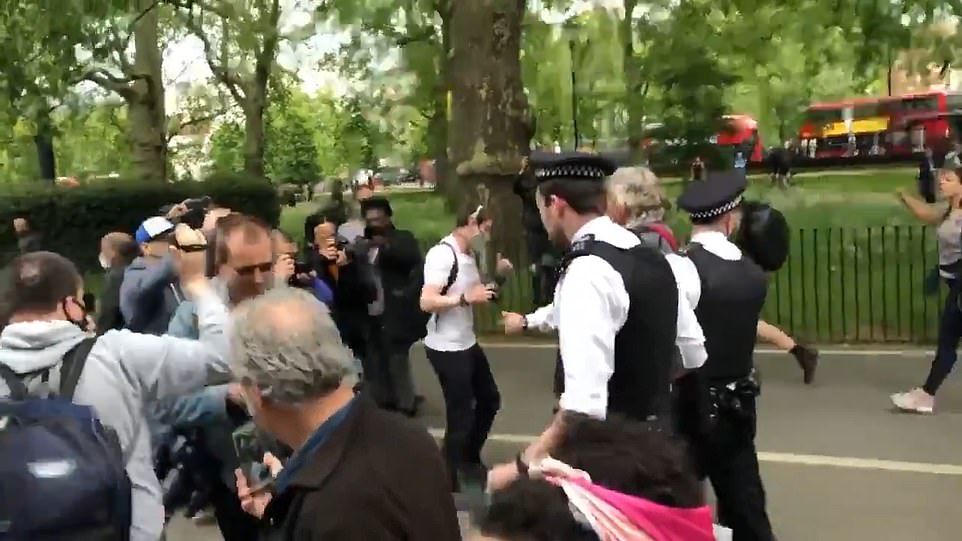 David Samson, 50, who said he works in finance, told the PA news agency he came because ‘I never thought I’d see in my generation the suppressing of civil rights’ over a ‘fake virus’.

There was a large round of boos when one protester was taken away in handcuffs by police.

The man appeared to put up some resistance while being led away, as police looked to remove his sign.

Another attendee held aloft a sign showing a Dr Who dalek, with the addition: ‘Exvaccinate’, while others read of ‘tracking and chipping’ theories linked to the outbreak of the virus. 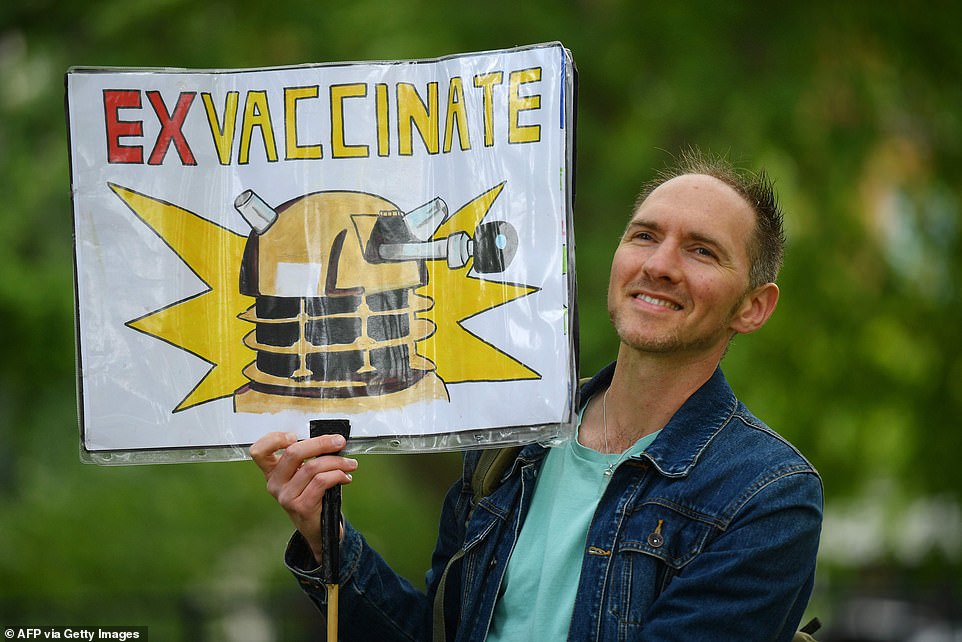 Another attendee held aloft a sign showing a Dr Who dalek, with the addition: ‘Exvaccinate’ 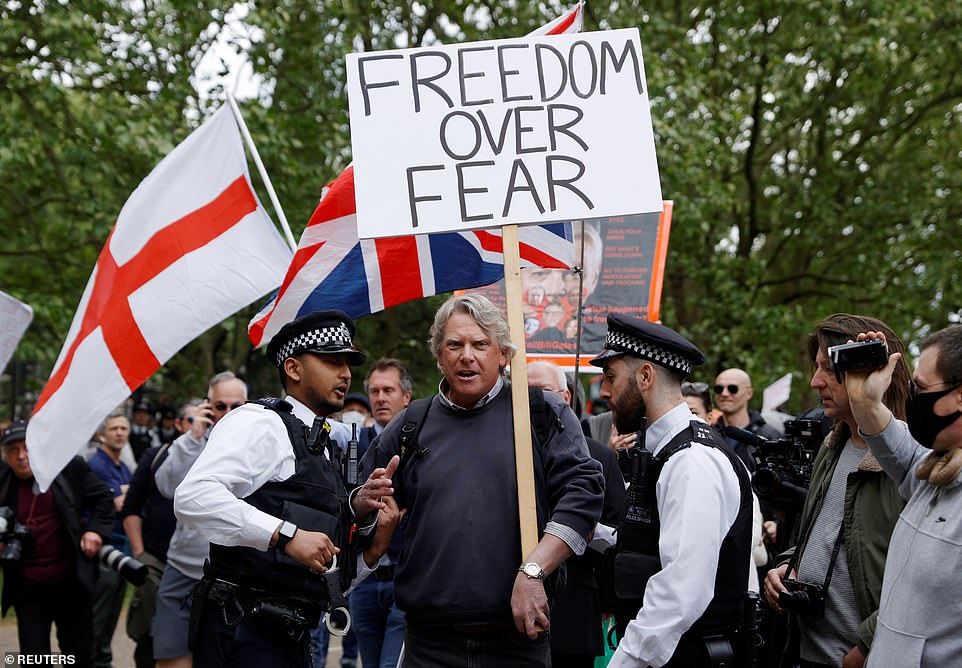 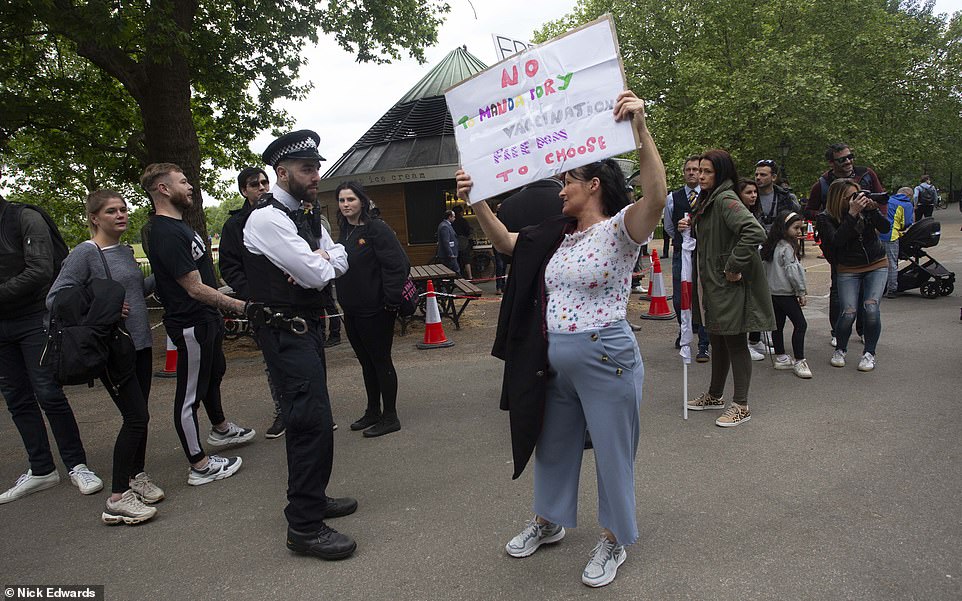 ‘No mandatory vaccination, freedom to choose’ read another of the signs in Hyde Park as officer watched on 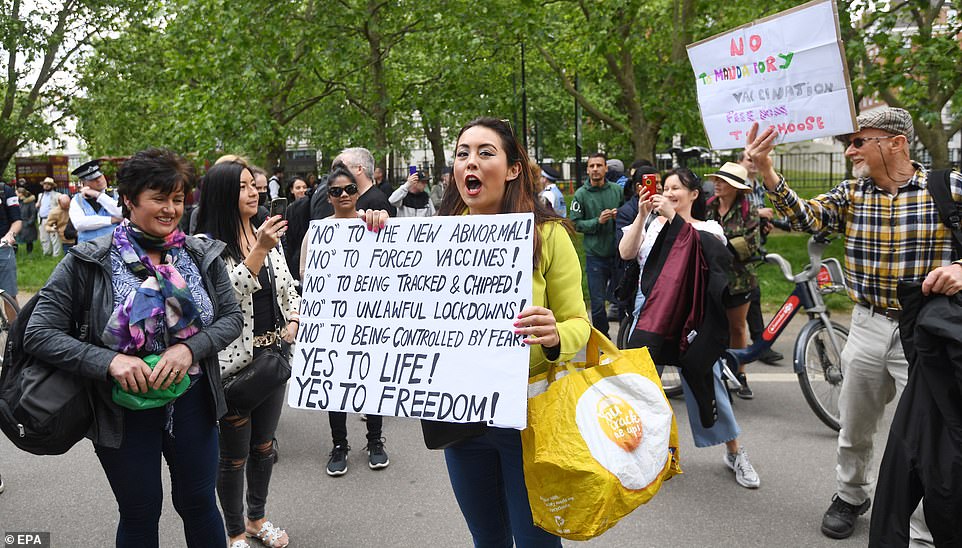 As police tried to disperse the numbers, flags could be seen waving in the air. The colours of the Union Jack and St George’s cross swirled above head as the masses chanted.

It is not the first time Piers Corbyn has been seen drawing attention to himself during the pandemic, after recently attending another anti-lockdown protest in central London and being given a penalty notice for doing so.

Corbyn, 73, called the fine an ‘abomination’ and an ‘attack on human rights’ after he refused on numerous occasions to heed the police’s polite requests outside St Thomas’s Hospital.

London was not the only site of lockdown protests on Saturday, as masses also gathered in other major cities including Glasgow, Edinburgh and Nottingham. 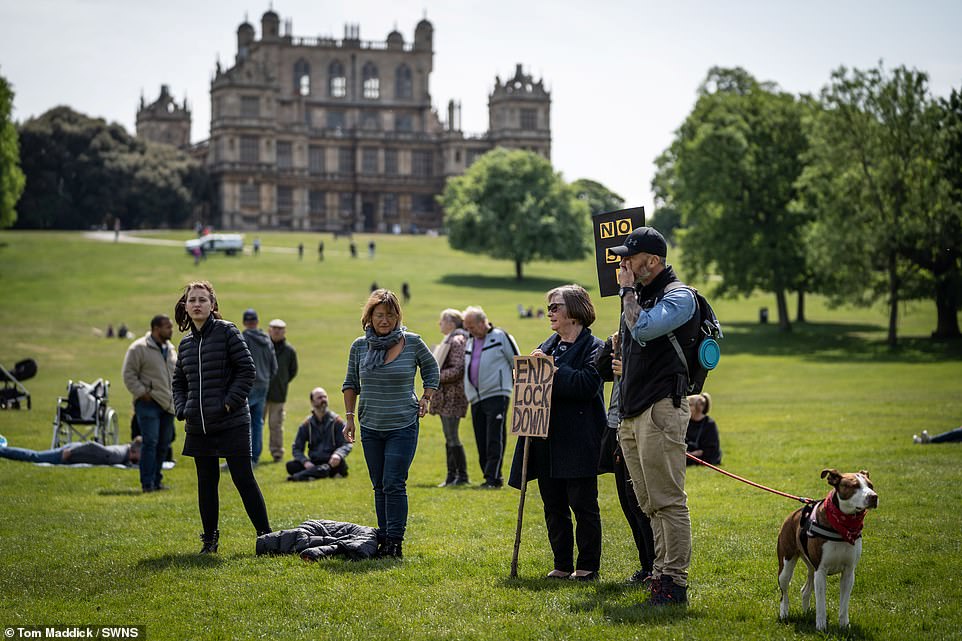 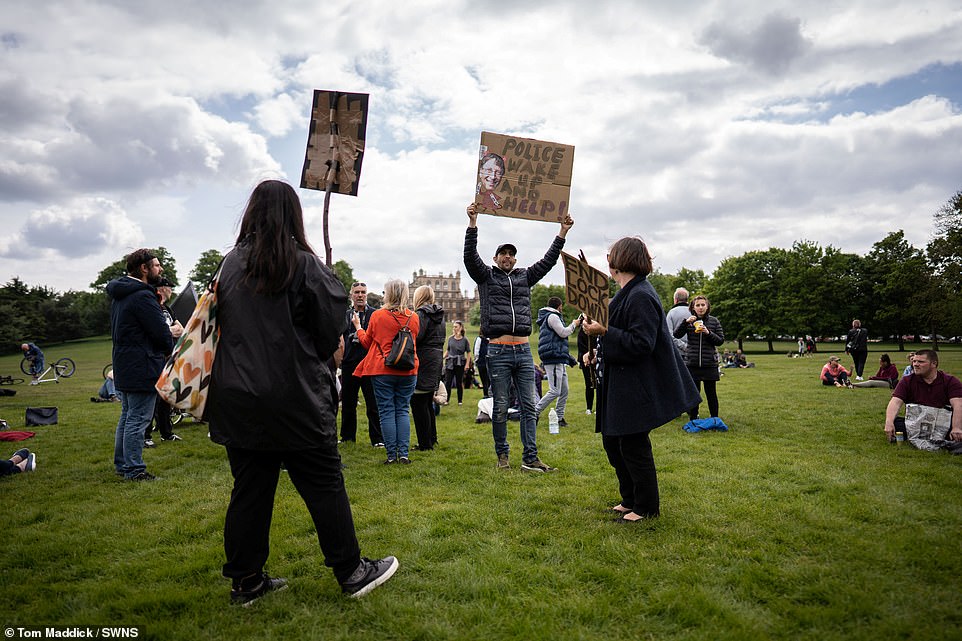 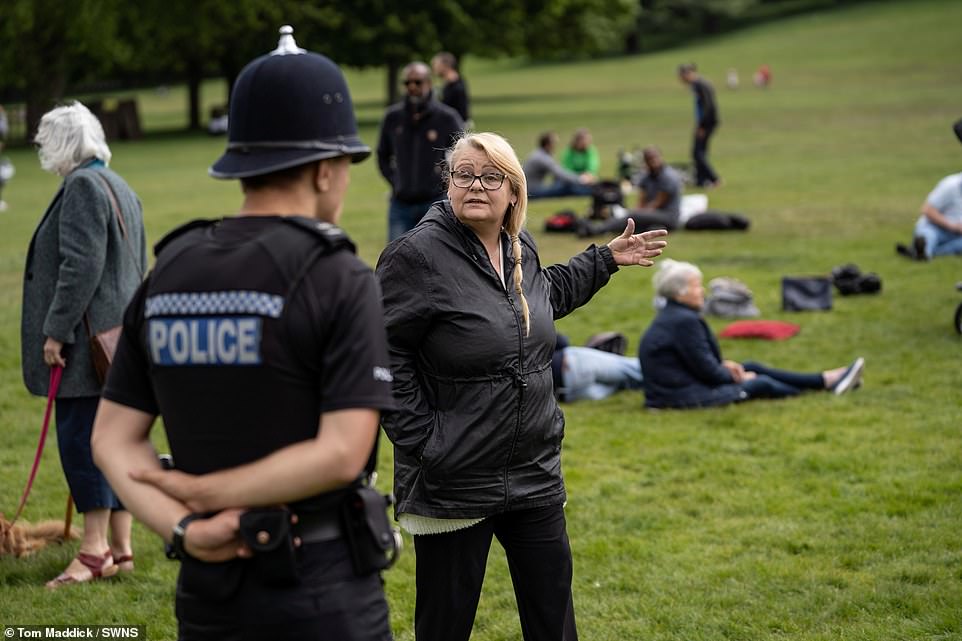 Police kept a watchful eye on proceedings, making sure the public were still adhering to social distancing