A Victorian police officer is standing trial accused of breaking a young man’s jaw by kicking him as he lay on the ground in a mistaken arrest.

A County Court jury has been told officers from the Critical Incident Response Team pinned down the man, then aged 22, just after 2am on May 7, 2017, wrongly thinking he had emerged from a van that had crashed after being driven from Melbourne’s eastern suburbs to Brunswick. 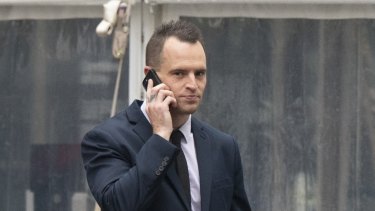 Roland Jones outside the County Court on Friday.Credit:Chris Hopkins

Police followed the van to Sydney Road after suspecting it was stolen. The driver was arrested at gunpoint when he crashed into a parked car.

But the young man who was pinned down, an Indian national who was studying in Melbourne, had no connection to the van and was with friends preparing to enter the nearby Cafe 666 when CIRT officers ordered him to the ground, thinking he was either the driver of the van or a passenger.

Footage recorded by the police helicopter and a CCTV camera in the street was played to the jury on Friday, and shows the student raise both hands and lower himself down when police approached.

Prosecutor Matt Fisher submitted to the jury that while the student was being restrained by two policemen, another CIRT officer, Roland Jones, approached and kicked him.

“It’s at that point the accused man runs towards [the student] and kicks him … kicks him to the head region,” Fisher said, outlining the prosecution case.

The student suffered a broken jaw and was knocked unconscious. Prosecutors allege Jones’ kick was deliberate and inflicted the injuries. They argue the police officer acted without lawful excuse or justification.

Fisher suggested to the jury on Thursday that one of the officers who was restraining the student closed his eyes when he saw Jones prepare to kick, and then heard a cracking noise. When that officer opened his eyes, he saw the student’s “eyes roll back”, followed by the sound of snoring, the prosecutor said.

The student was groggy when assisted to his feet and required surgery in hospital, the trial heard.

After the kick, Jones was allegedly pulled back by a colleague who said, “He’s not involved, Jonesy”.

Hours later, Jones told investigators he thought the student was “thrashing about” and that the two officers were struggling to restrain him, Fisher said. Jones told the investigating police he aimed to kick the student’s left shoulder, but his strike deflected and connected to the young man’s head.

Defence counsel Jason Gullaci on Friday asked the jury to consider whether Jones thought the student was restrained or complying with police orders.

“The fact there is a mistaken arrest doesn’t make it an unlawful arrest,” Gullaci said.

Gullaci said while the student was wrongly arrested, it was disputed he was complying with police orders to stay still. The defence lawyer urged jurors to consider whether the young man’s conduct might have been the reason Jones acted the way he did.

He also questioned whether Jones’ kick caused the young man’s injuries, and asked jurors to consider whether another officer forcefully held the student to the ground.

The jury was also asked to scrutinise whether police definitely knew the student wasn’t involved in the suspected theft of the van, and what confronted police in Sydney Road that morning.

“Was it a calm situation or was it chaos?” Gullaci asked.