Boris Johnson’s plan to hike National Insurance to fund a social care overhaul has split the nation in half, according to a new poll.

A Savanta ComRes survey found that 46 per cent of people believe it is ‘acceptable’ for the Prime Minister to break his 2019 manifesto pledge not to increase taxes.

But some 42 per cent of respondents to the poll said they believe it is ‘unacceptable’ to breach the promise. 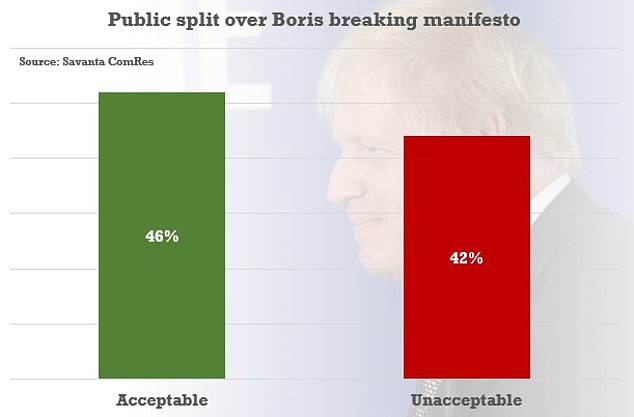 The 2019 Tory manifesto said: ‘We promise not to raise the rates of income tax, National Insurance or VAT.

‘This is a tax guarantee that will protect the incomes of hard-working families across the next Parliament.’

Today’s poll showed that the nation is divided on whether breaking the promise is acceptable.

Meanwhile, almost three in 10 people, 28 per cent, said they would not raise National Insurance to fund social care.

A further third, some 32 per cent, said they would only raise it by one per cent.

The poll also suggested that there would be more support for an income tax hike over a National Insurance increase.

Three in 10 people, 30 per cent, backed putting up National Insurance while 45 per cent said they would raise income tax instead.

The poll also showed the nation is divided over the decision to shelve the pension triple lock.

The lock, another Tory manifesto commitment, guarantees that pensions grow in line with whichever is highest out of earnings, inflation or 2.5 per cent.

Distortion to wage growth caused by the coronavirus pandemic has prompted the Government to temporarily ditch the wage link, with pensions set to increase either by 2.5 per cent or inflation.

One third of people, some 31 per cent, support shelving the triple lock while 36 per cent oppose the decision.

Chris Hopkins, political research director at Savanta ComRes, said: ‘Much will be said in the coming days about how the government’s latest announcements will affect their future electoral prospects, namely breaking a manifesto commitment and temporarily removing the triple lock from pensioners, a key voting bloc for the Conservatives.

‘On this evidence, breaking a manifesto commitment is unlikely to have a huge electoral impact, particularly within the context of an electorate that’s willing to be forgiving due to the pandemic, although time will tell on whether Labour drive home a message of tax rises and broken promises from the usually fiscally prudent Conservatives.’