Ms Berejiklian told reporters she had reached out to Ms Palaszczuk and hoped she would take up the offer of having a conversation. The QLD Premier responded with a text message before the press conference was over saying she was keen for a discussion.

Border closures will be the key issue discussed at Friday's national cabinet meeting, where Prime Minister Scott Morrison will urge the states and territories to phase out border controls that are being blamed for prolonging the recession. 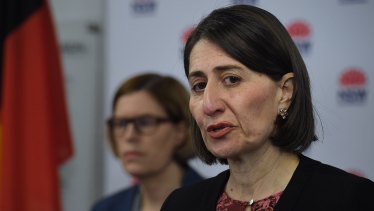 NSW recorded 17 new COVID-19 cases overnight, with only one locally acquired from no known source.

Fifteen cases were linked to known clusters and one was a hotel quarantine.

NSW Health Minister Brad Hazzard pleaded with Ms Palaszczuk to be more compassionate to patients in border communities whose health was at risk by the inflexible border measures.

“I think the Queensland Premier and the Queensland Government need to realise that people’s lives are being put at risk by the decisions the premier is making in Queensland," Mr Hazzard said.

“I take it personally when people are impacted unintentionally especially when they have a medical crisis or a jobs crisis and I hope that all state governments will respond,” she said.

“It is really important that in those high-risk, indoor activities or in places where social distancing can’t always be maintained for people to wear masks,” she said.

"I want to see those rates of mask-wearing to increase," she said. The data from Services NSW varies from 20 per cent to 60 per cent across different sectors.

NSW Chief Health Officer Dr Kerry Chant eight of the new cases were linked to the Sydney CBD cluster bringing it to a total of 49 cases.

Six new cases were linked to the St Paul’s Greystanes cluster and one case was linked to Liverpool Hospital.

One case is a traveller in hotel quarantine.

A total of 20,083 tested were carried out in the latest 24-hour reporting period, a significant improvement on the 14,815 tests undertaken in the previous 24 hours.

This comes as Victoria's state of disaster has been extended for a further 11 days after recording 90 new cases and six deaths.

Premier Daniel Andrews said the state of disaster – which was due to expire on Wednesday, needed to be extended to take the state through until the scheduled end of Melbourne's strict stage four lockdown on September 13.

The burden of our cases are really in 25 or so local government areas, so there is a concentration that remains in the north and west, but also in Casey in the south-east," he said.

"There is a push to get testing in the south-east, because there is not enough compared to the north-west."