Primary school rises to the challenge with small 'bubble' classrooms

As teaching unions lock horns with officials, it’s easy to forget the schools that have quietly risen to the challenge – and the solution is as simple as a ‘bubble’.

Caldicotes Primary Academy in Middlesbrough has seen around 20 key workers’ children and vulnerable youngsters come in to school every day for the last nine weeks of the lockdown.

Head teacher Helen Steele said the children were happily socially distancing within days, after staff developed a system of ‘bubbles’ – classes of up to 15 pupils, with two members of staff responsible for their care.

They are adhered to from the moment children arrive until home time. 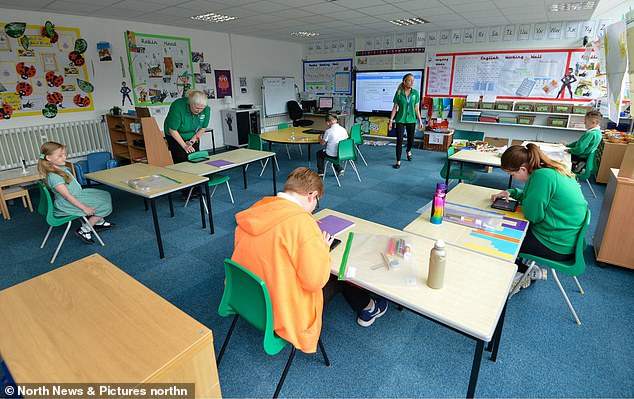 Caldicotes Primary Academy in Middlesbrough which is coping well with restrictions placed on it from coronavirus. This picture shows learning taking place in one of the classrooms which has been adapted for social distancing

‘We introduced social distancing on a Monday and by the Wednesday the children were used to it,’ Mrs Steele said.

‘Obviously they are young children and they need comfort, but there are so many ways we can make sure they get that. I’m most concerned about their wellbeing and so are my staff.’

When the Daily Mail visited this week, Year 5 pupil Samuel was learning Spanish at his desk two metres from Leo, working on his Year 3 maths.

Their bubble had five children in it, while another bubble of 12 was at work in a classroom down the hall.

Mrs Steele, whose school is part of Academies Enterprise Trust, Britain’s second largest chain, is looking forward to when more of her pupils return.

She said: ‘These children generally do not get another chance in life so we want to be there for them. Fundamentally, I can’t wait to get them back.

‘The unions have a responsibility to their members – a lot of the questions they are asking are the same as the ones I have been. But we have worked out solutions.’ 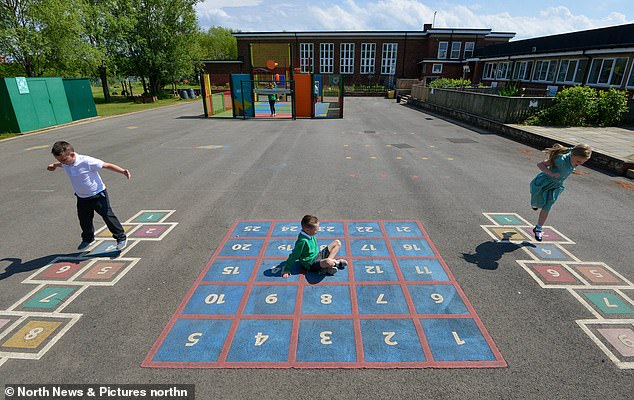 Pupils hit for rest of their lives

By Josh White and Kate Pickles

School closures could cause a lifelong ‘shock’ to children’s future prospects, Government scientists have warned – but unions fighting plans to reopen last night refused to budge.

The Scientific Advisory Group on Emergencies (Sage) believes the classroom shutdown could affect ‘educational and work outcomes for the rest of their lives’, papers released yesterday show.

The claim is contained within a series of documents detailing Sage’s advice to the Government, published in a bid to convince teaching unions to drop their opposition to reopening schools on June 1. 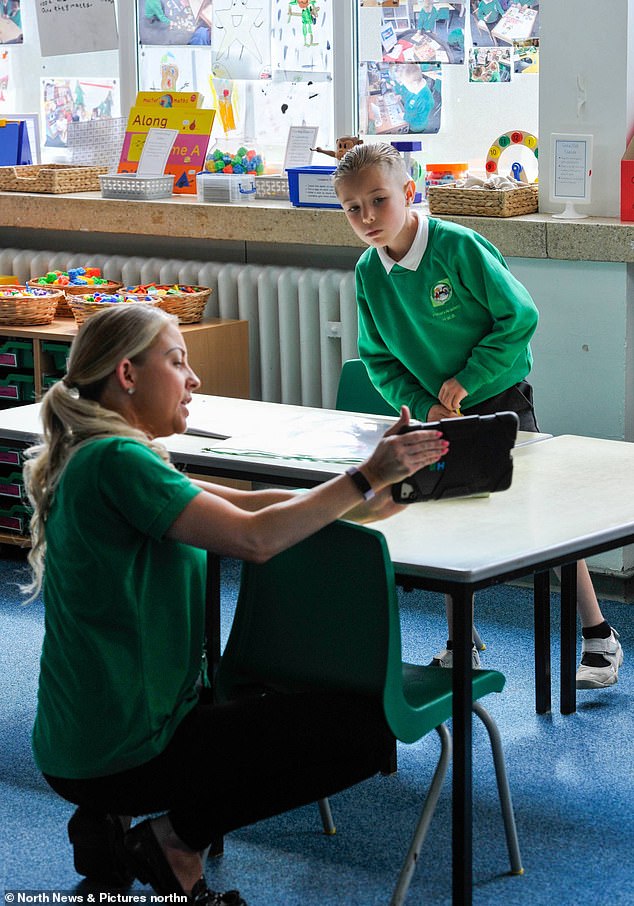 But the documents show Sage believes track and trace must be in place before schools do reopen, heaping pressure on the No10.

In one paper on ‘wider impacts of current and possible interventions on children’, the scientists state: ‘A cohort of children have experienced a shock to their education which will persist and affect their educational and work outcomes for the rest of their lives.’

They also suggest that the lockdown may lead to an increase in ‘adverse childhood experiences’ – such as domestic violence or child neglect – and is likely to ‘exacerbate social inequalities’.

The papers were released as a major review found children were half as likely as adults to catch Covid-19, with lead scientists saying the results pointed ‘strongly towards a return to school’.

A father has lost a legal battle with his ex-wife after she sent their two girls back to school.

The woman, a key worker, and the man had been sharing custody during lockdown, with the girls, aged ten and eight, spending one week with each.

Last week the mother returned to work and sent her daughters back to school.

The father, who cannot be named for legal reasons, objected on safety grounds.

The woman then applied to Portsmouth Family Court for the custody arrangements to be amended so she could ensure the girls attended, and this week a judge agreed to the move, giving her primary custody.

The father said: ‘I was horrified. I would have hoped a family court judge would put the children’s safety first.’

Researchers at University College London found that under-20s were 56 per cent less likely to contract coronavirus, concluding that ‘children are the safest group to be out in the community’.

Boris Johnson wants primaries in England in Reception, Year 1 and Year 6 to go back to class from a week on Monday, with others to follow in a ‘phased’ restart.

Sage also suggested that younger teachers’ attendance could be prioritised in order to decrease the likelihood of infection for staff in more vulnerable groups.

Ministers were told that the research on how likely children are to transmit Covid-19 is still unclear, with the document stating: ‘Evidence remains inconclusive on both the susceptibility and infectivity of children, but the balance of evidence suggests that both may be lower than in adults.’

Parents are divided over the decision to return to school, with a poll for ITV News last night suggesting that more than half would not send their children back before the end of the academic year.

Chief scientific adviser Sir Patrick Vallance yesterday said reopening was likely to push the virus’ reproduction ‘R-rate’ up. He said: ‘The risk for children is much lower. They are at low risk – but not zero risk.’

Resistance to the reopening, led by the hardline National Education Union and some councils, has left parents in the dark as to whether it will indeed go ahead. Sage also believes there is still some risk if reopenings are mishandled.

One recent paper notes that if the virus ‘reproduction number is only just below 1, then even a small change could lead to a return to exponential growth’.

In one document, Sage appeared to favour rotating pupils between different weeks, which Government sources say is unworkable.

Last night the NEU accused the Government of a ‘cavalier attitude towards the nation’s children’.

Their refusal to get behind the proposals could cause chaotic reopenings of different schools at different times – or even a humiliating climbdown by the Government.

Last night Dr Mary Bousted, Joint General Secretary of the NEU, said: ‘We are surprised that the wider opening of schools proposed by Boris Johnson has not been modelled by Sage.

‘This points to a cavalier attitude towards the nation’s children.’ She said the PM was expecting schools ‘to take a leap of faith with him’.

‘The NASUWT remains of the view that no school should reopen until it can be demonstrated that it is safe to do so’, he said.

It came as a group of scientists who have set themselves up as an ‘independent Sage’ claimed it would be ‘dangerous’ for schools to reopen on June 1.

Sir David said: ‘By going ahead with this dangerous decision, the Government is further risking the health of our communities and the likelihood of a second spike.’

The Sage dossier was released as a separate study from UCL concluded the risk of death or severe infection for children was ‘exceptionally low’.

Russell Viner, professor of adolescent health at UCL Great Ormond Street’s Institute of Child Health, said: ‘The balance of risks, I think, sits strongly towards a return to school, given the very clear evidence of harm due to lockdown.’

A Department for Education spokesman said: ‘Advice from Sage shows there is a lower overall risk from opening schools and nurseries to younger children.

‘This cautious, phased approach … has been, and will continue to be, informed by the best possible scientific and medical advice.’

Grades awarded to pupils in place of exam results will be changed to reflect national standards, exam chiefs have revealed. Schools and colleges are ‘highly likely’ to have some of the grades – awarded by teachers based on youngsters’ past performance – ‘adjusted’.

Ofqual, which regulates GCSEs, A-levels and vocational qualifications, says this is to ‘make sure grades are as fair as possible’.

The organisation said grades awarded by schools and colleges would be reviewed by considering each institution’s performance against national guidelines.

But unions are worried that the plans may unfairly hit disadvantaged pupils.

In a state ment, Ofqual said: ‘Such adjustments are in the interests of fairness to all students because they will ensure, as far as possible, that individual centres have not been too severe or too generous in comparison with other centres.’

Ofqual is also consulting on plans to offer a full range of exams to pupils in the autumn for those who are unable to receive a calculated grade or want to re-sit an exam.

A full series of AS and A-level exams are likely to take place in October and GCSE exams in November.

This is subject to consultation with students and school and college leaders over the coming weeks.

Ofqual is proposing to ‘offer the full suite of papers as are normally offered in other summer exam series’.

It is consulting until June 8 about its proposals for how calculated grades should be determined.

It wants grades to be based on previous exam performance, with the exception of art and design subjects. Ofqual said proposals to award calculated grades have been supported by 82 per cent of the 12,623 respondents so far.

But University and College Union general secretary Jo Grady said: ‘We are disappointed that more has not been done to recognise the impact that these changes will have on disadvantaged students.

‘Without action, these groups are likely to be even more underrepresented.’

Bill Watkin, chief executive of the Sixth Form Colleges Association, said while Ofqual had ‘set out the fairest possible way’ to award grades, there will still be ‘winners and losers this year because no one system can meet the needs of every centre and every young person’.

Commenting on the plans for autumn exams, Geoff Barton, general secretary of the Association of School and College Leaders, raised concerns about the practicalities of hosting a full exam season ‘on top of everything else they will have to do as a result of the current crisis’.

Sally Collier, chief regulator for Ofqual, called for students, teachers, lecturers and institutions to give their views in the consultation.