Prince Harry and Meghan team up with Procter & Gamble

The partnership would focus on gender equality, creating inclusive online spaces and “resilience and impact” through sport, the non-profit group said in a statement. It did not offer financial details. 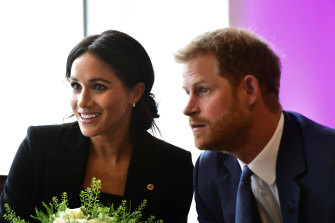 Prince Harry and Meghan, the Duke and Duchess of Sussex.Credit:AP

It said it would build on the work they did with the company in support of the recent Global Citizen’s VAX LIVE: The Concert to Reunite the World, which it said “inspired vaccine confidence worldwide” and raied more than $US300 million ($385 million) for greater global access to COVID-19 vaccines.

Procter & Gamble says it has donated $US5million to COVAX — the global effort to provide free COVID-19 vaccines to low-income countries — and nearly $US7 million to vaccinate 500,000 people in India. It has also donated medical and protective equipment, and products to various charities working in vaccination campaigns around the world.

The Duke and Duchess of Sussex have other causes in common with the company and listed them as part of the partnership, including a homeless shelter for expectant mothers and work to engage men and boys in the drive for gender equity.

There is no suggestion they’d become the face of any of P&G’s brands which include Gillette, Pantene, Olay, Tampax, Vicks and Old Spice.

The duchess’ relationship with the company reportedly goes back to when she was 11 and wrote to complain about a soap advertisement she found sexist. The company subsequently revised the spot.

The couple lives in California after stepping away from their royal duties last year.

Harry and Meghan have also previously signed deals to deliver programming to Netflix and produce and host podcasts for Spotify.

In March they gave a tell-all interview to US chat show host Oprah Winfrey, with whom Harry is also working on a documentary series about mental health for the Apple TV+ streaming service.