Runnymede: The Queen has honoured the thousands of Australians who died in the skies over Europe but were never found, in a rare journey outside the walls of Windsor Castle by the recently vaccinated monarch.

Her surprise appearance at a memorial service west of London was the pinnacle of a day of commemorations to mark the centenary of the Royal Australian Air Force and nod to the 94-year-old’s enduring affection for Australia.

The visit to the Air Forces Memorial at Runnymede was only the third time since March 2020 that the Queen has held an engagement away from the castle where she and Prince Philip have sheltered for most of the coronavirus pandemic.

After arriving by car at 11am local time (9pm AEDT), the Queen was greeted by high commissioner George Brandis, met serving members of the Royal Australian Air Force stationed in Britain, viewed the names of Australia’s war dead and signed a commemorative document.

Her attendance had been carefully planned for months by Brandis and Buckingham Palace officials.

The Royal Australia Air Force was announced in the government gazette on March 31, 1921 after Britain gifted 123 planes from World War I.

In a formal statement, the Queen said she was "delighted" to congratulate the RAAF.

“As one of the oldest Air Forces in the world, it is fitting to pay tribute to the efficiency, skill and sacrifice of the men and women who have served in its ranks, in Australia and overseas, during the past one hundred years,” she said.

"Throughout my reign, the Royal Australian Air Force has shown immense dedication to duty and defended our freedom in many conflicts around the world."

The Queen wore a lime and ivory summer tweed dress and coat, and the same wattle-shaped broach she was given by the government of Australia during her first visit in 1954.

The Runnymede memorial commemorates the 20,456 men and women from the air forces of the British Empire who died during World War II and have no known grave.

The Queen – who served as a driver and mechanic during World War II – first opened the imposing memorial on October 17, 1953. The then 26-year old had succeeded to the throne just one year earlier.

In a speech on Wednesday, Brandis noted that the Magna Carta had been signed in the field next to the air forces memorial.

“As Your Majesty observed when you opened this memorial in 1953, it is particularly appropriate that it should be located at Runnymede, the storied place to which we trace the ancient democratic liberties of both of our nations,” Brandis said.

“It was for the defence of those liberties that the 20,000 brave airmen memorialised on these walls – but who have no known grave – made the ultimate sacrifice

“Among them are the names of 1383 Australian who, between 1939 and 1945 – far from home yet bound by the crimson threads of kinship – died in the skies over Europe in the defence of Britain and the liberation of Europe.”

The monarch’s appearance on Wednesday – just two days after restrictions were eased on how many people could gather outdoors in England – points to a more public profile this year as the COVID-19 risk subsides. 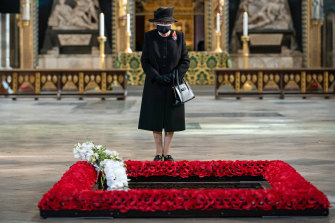 Queen Elizabeth II last appeared in public during a ceremony in Westminster Abbey to mark the centenary of the burial of the Unknown Warrior on November 4, 2020.Credit:Getty

The Queen has been isolating at home for most of the pandemic and left Windsor Castle only twice before for public engagements. The first was in October 2020 to meet scientists at a defence facility near Salisbury; the second was for the centenary of the burial of the Unknown Warrior in Westminster Abbey in November.

The only other times she has been seen out in public – for a military parade and to knight the late Captain Sir Tom Moore – were within castle grounds.

The Queen and 99-year-old Prince Philip were given their first dose of a COVID-19 vaccine in early January and are thought to have since had the second shot.

The Runnymede memorial followed a series of events around Australia to mark the RAAF’s centenary, including a $350,000 dinner for 900 guests in Canberra.

The skies over Europe were by far the most dangerous theatre of operations for Australians during World War II, with more than 4100 RAAF members killed while serving under the umbrella of the RAF Bomber Command.

Dr Lachlan Grant, a senior historian at the Australian War Memorial, found more than one in three RAAF members who served in the Bomber Command were killed – amounting to 20 per cent of all Australian combat losses during the war.

Under the so-called Imperial Gift of 1920, Britain gave Australia 126 planes which were either surplus to needs or replacements for Australian aircraft lost during battle.

Many remained in storage and were never used but others were deployed to survey Australia’s coastline or perform at air shows.

Drawing on the centenary’s motto of ‘then, now, always’, Brandis said the RAAF had worked in close partnership with the Royal Air Force during most wars and missions following World War II.

“As the RAAF begins its second century, we can be certain that this world class air force will always be here to serve us,” he told the crowd. “It will be here to support Australia’s friends and allies.

“And, you may be assured here in the United Kingdom – whose Royal Air Force was its inspiration – the Royal Australian Air Force will be here for you: as then, so now and always.”