Questions are raised over who revealed Neil Ferguson's affair

Who sunk Neil Ferguson? Was it a jealous relative, scientific rival or an economic hawk keen to end lockdown despite Britain’s atrocious death figures who revealed his affair?

Commentators from across the political spectrum are questioning the timing of the news that forced Neil Ferguson to quit all his government roles after he met with his married lover for trysts during the lockdown he repeatedly advocated.

The Imperial College scientist, nicknamed ‘Professor Lockdown’ for his crucial role in persuading Boris Johnson to introduce the strict measures, has come under considerable fire after details emerged of his repeated flouting of the lockdown.

Prof Ferguson, 51, asked Antonia Staats, 38, to travel through London at least twice to meet him as he reinforced the government’s ‘stay at home’ message. 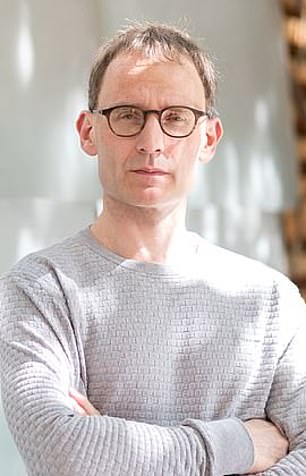 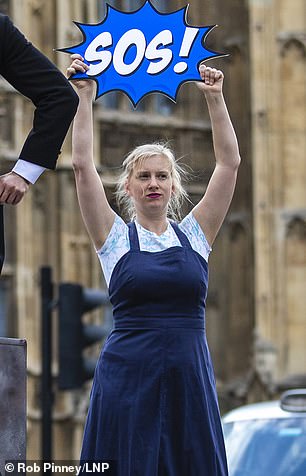 However, details of the scandal broke yesterday, as the UK’s Covid-associated death toll became Europe’s highest – then at 32,375.

The timing has prompted widespread speculation over why the illicit lockdown affair became public knowledge when it did – and who blew the whistle.

So who threw Prof Ferguson under the bus?

Could it have been one of Prof Ferguson’s neighbours? 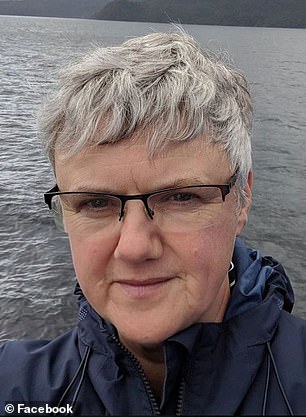 One theory points fingers at close friends of Ms Staats, the Left-wing activist who struck up an affair with the married Imperial College scientist.

Ms Staats has been described as being in an ‘open relationship’ with Chris Lucas, the grandson of a Battle of Britain pilot and Tory MP.

She and her husband lived together in a £1.9million house with their two children.

According to reports, she was frank about her affair with Prof Ferguson within her social circle, and insisted that her action to visit him were not hypocritical.

Ferguson is said to have matched with Ms Staats on the OkCupid app used by 3.5million around the world to find love.

One of her friends claimed that he and Ms Staats’ husband have even met. As well as sharing a passion for her, they also bonded over a love for data science. 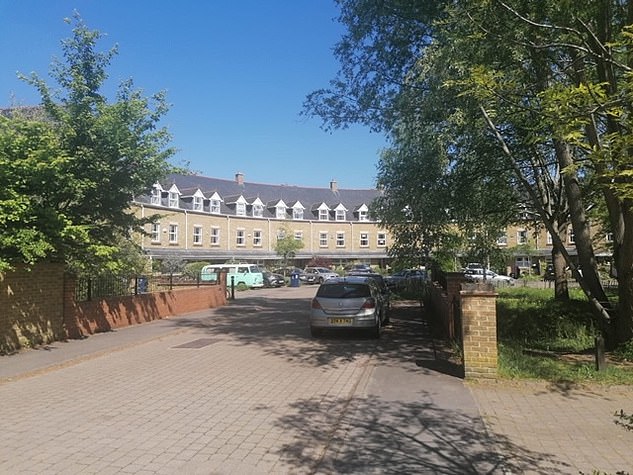 Neighbours at Prof Ferguson’s former marital home in Oxford were furious at his behaviour. He and his wife Kim, who is involved with the residents’ association, are said to be estranged

Yet few of the activist’s friends knew about the affair that made headlines around the world and left Prof Ferguson’s reputation in tatters.

Some of Professor Lockdown’s neighbours at his former marital home in Oxford have been less than charitable about his behaviour.

They told MailOnline that they were furious, as one commented: ‘I feel incredibly sorry for his wife and child. They are totally blameless and humiliated I would think.’

Another resident sitting in the sunshine near to Prof Ferguson’s home, said: ‘My sympathies are with his wife. She has put a message on our lockdown WhatsApp group saying she does not want to talk about it’.

A man, out for a stroll with his wife, said: ‘He’s not been around for weeks. I don’t think he actually lives here anymore.

‘I think he should have taken a leaf out of his neighbours’ books. We have been observing the lockdown like everyone else.

‘I just think he must have thought it was no risk because he’d already had it.’

Could it have been one of Chris Lucas’ friends or relatives? 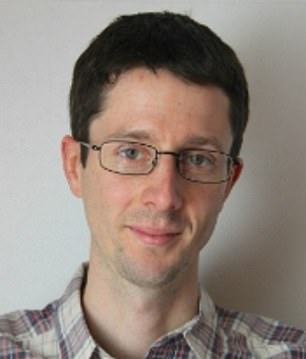 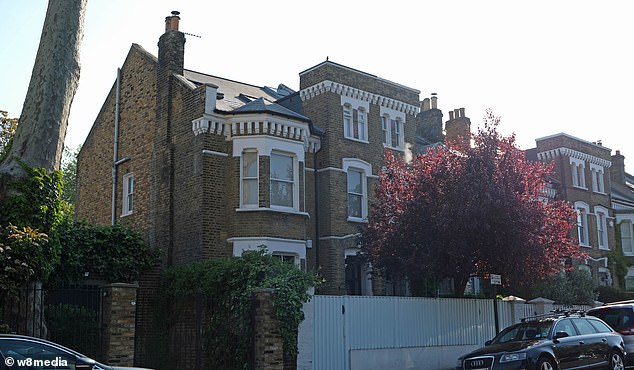 The South London home of Antonia Staats, which she shares with her husband Chris and their two children. Prof Ferguson is thought to have met Ms Staat’s husband and they share an interest in data science, a friend told the Telegraph. 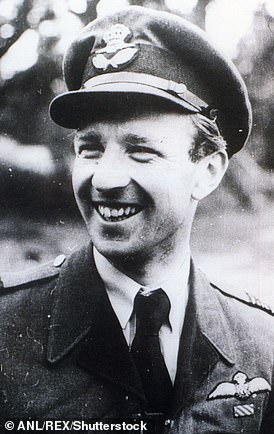 Laddie Lucas, who flew Spitfires as one of The Few, and who died in 1998, was married to Jill Addison, the sister of Bader’s wife.

Laddie Lucas was elected as a Tory MP in 1950 for the Brentford and Chiswick constituency and served in the Commons until 1959 when he retired.

While serving as an MP, he was managing director of the Greyhound Racing Association.

He also played golf in the 1947 and 1949 Great Britain and Ireland Walker Cup team, and captained the team in 1949, before later covering sport for the Sunday Express newspaper.

Laddie died at his Chelsea home at the age of 82 after a glittering services, golfing and journalism career.

They said that he and his wife Ms Staats are popular residents of the affluent, middle class area where houses cost in excess of £1.5million.

One said: ‘Chris is incredibly intelligent. He speaks about six or seven languages and is an academic at SOAS. Both he and Antonia are very popular around here and are a big part of our community.

‘I always enjoy talking to them, especially Chris who is very knowledgeable about Middle Eastern affairs. Whenever we have any kind of community celebration they always take part along with their kids. They are a great family.

‘I’ve known Chris and his family for five years. Chris is really intelligent and successful but he’s really down to earth’, another neighbour commented.

One theory which has been circulating is that the disclosure might have come from those connected to Mr Lucas’ parents, who are understood to have extensive links among senior Tories dating back several decades.

His father is Jeremy Lucas, a prominent member of the Cities of London and Westminster Conservative Association.

A former lawyer and investment banker, Mr Lucas Sr is considered a ‘Tory big wig’ and his contacts might have known about Ms Staats’ affair.

It has also emerged that Mr Lucas Jr is the grandson of Battle of Britain pilot and Tory MP Percy ‘Laddie’ Lucas, related to the family of flying ace Douglas Bader.

Laddie Lucas flew Spitfires as one of The Few and was awarded a CBE and the Flying Cross medal. He was married to Jill Addison, the sister of Bader’s wife.

Could it have been leaked from Downing Street?

Professor Ferguson quit from the Scientific Advisory Group for Emergencies (SAGE) and the New and Emerging Respiratory Virus Threats Advisory Group (NERVTAG) on the day the UK became the de facto epicentre of the pandemic.

Reports of Britain as Europe’s ‘sick man’ are devastating to the Johnson government, which has sought to project an image of stability during the crisis.

Figures released yesterday had also shown that the British government missed its 100,000 per day testing target for the fourth consecutive day. 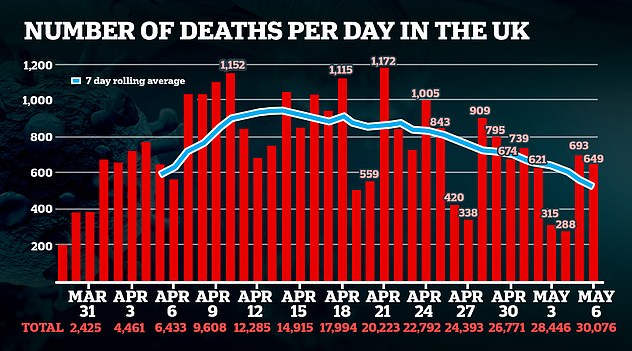 The damning coronavirus figures prompted social media users to adopt the hashtag #DeadCat as the Johnson government was accused of using the story to distract public opinion in the face of a growing backlash to its crisis-management abilities.

He claimed: ‘It is a story. But it is far less important than the story from which it is being used to deflect attention… don’t gorge on the dead cat too much.’

Sarah Wollaston, an ex-Liberal Democrat MP for Totnes, also seemed to draw a link between news of the scandal and the latest Covid figures.

‘Looks like the dire news of the UK having the highest #coronavirus deaths in Europe and frank analysis of why or how to learn from that for the future, is going to be entirely lost to a feeding frenzy targeting an individual scientist,’ she tweeted.

Speaking on LBC, John Sweeney, former BBC investigative reporter said: ‘You’ve forgotten the simple statistic that appeared this evening, which is that Britain has the highest number of deaths in Europe bar none.

‘And it’s weird, is it not, that this story about the professor’s sex life pops up today.

‘Isn’t it? Do you get the context here? Is it possible that this is a dirty tricks campaign by this government? People like Dominic Cummings who played the game so naturally that the Chancellor of the Exchequer had to resign and hand over to someone else because he didn’t like his game.’

‘Let’s keep the focus on the real story -> why & how the UK govt, with all the resources available to it, have allowed the UK to have highest death rate in Europe.’ 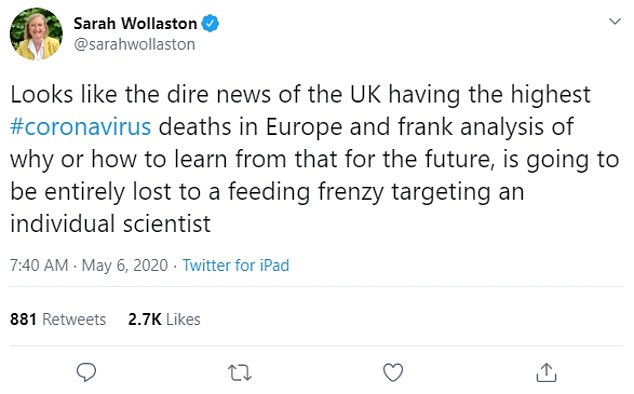 Former Lib Dem MP Sarah Wollaston said: ‘Looks like the dire news of the UK having the highest #coronavirus deaths in Europe and frank analysis of why or how to learn from that for the future, is going to be entirely lost to a feeding frenzy targeting an individual scientist’ 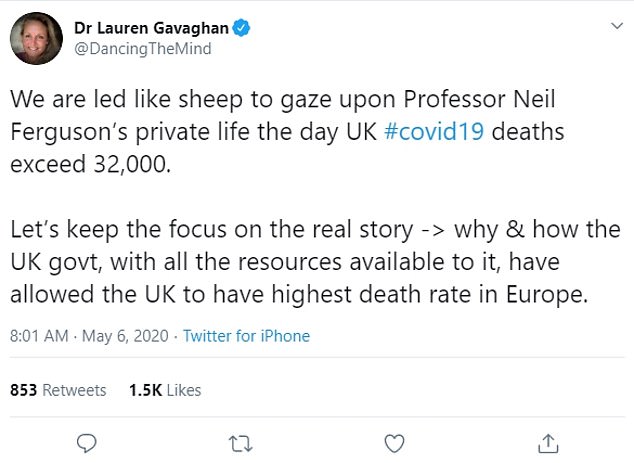 Alastair Campbell said: ‘It is a story. But it is far less important than the story from which it is being used to deflect attention… don’t gorge on the dead cat too much’

Palliative care doctor and author Rachel Clarke told her 120,000 followers: ‘Quite astonishing the way Neil Ferguson was thrown under a bus to ensure yesterday’s real headline news – the UK having more #COVID19 deaths than any other country in Europe – no longer dominates the front pages.’

Toby Young, writing in the Spectator, said: ‘Truth be told, though, I’m not that bothered about the double-standards.

‘My hope is it will be an emperor’s-new-clothes moment, breaking the spell this Rasputin figure has cast over Boris and the cabinet.

‘God knows, there’s enough evidence that his computer model, which predicted 250,000 would die if the government didn’t place the country under house arrest, is about as reliable as Paul the Octopus.’ 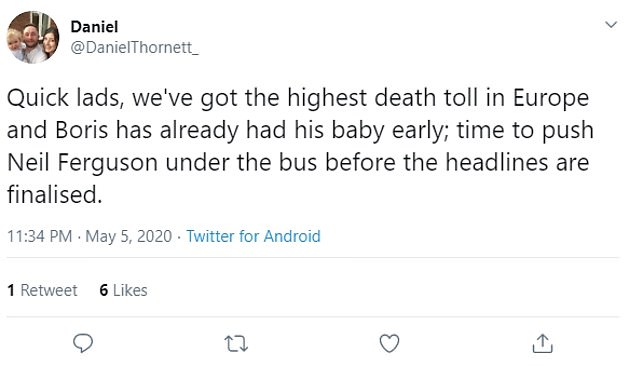 He said that in Sweden it was argued that their healthcare system would be overwhelmed 40-fold with nearly 96,000 dying of Covid-19 by the end of the year – and the model predicting a death toll of 40,000 by May 1.

But Sweden’s death toll from coronavirus stands at 2,854 and its hospitals are nowhere near the projected collapse, Mr Young wrote.

A scientific paper published by Prof Ferguson and his colleagues on the Imperial College COVID-19 Response Team had been credited for persuading Boris Johnson’s Government to ramp up their response to the virus. 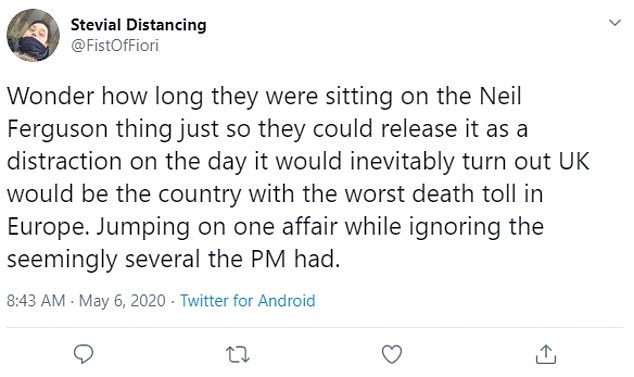