Home » World News » ‘Rates will have to rise’: Council mergers in crisis as losses mount

‘Rates will have to rise’: Council mergers in crisis as losses mount

The NSW government's controversial council merger policy is in crisis, with the 20 amalgamated councils losing $1.03 billion in three years and ratepayers facing hikes in rates and cuts in services.

And as some merged councils battle for survival, others are under fire for overspending and mismanagement of questionable projects – including Bayside Council, which spent nearly $7 million of a government grant on astroturf in two neighbourhood parks, and Inner West Council, which spent almost $10 million on an IT project without going to tender. 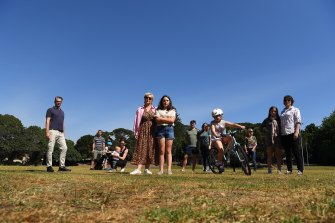 Bayside Council has been criticised by residents for its plan to astroturf two neighbourhood parks, including Gardiner Park in Banksia. Credit:Kate Geraghty

The Coalition introduced the "Fit for the Future" council merger policy in 2015 with a $627 million carrot to make councils more efficient, deliver better services and infrastructure and address concerns that more than two-thirds of councils were losing money at an operating level and relying on state and federal government grants to stay afloat.

Then-premier Mike Baird argued it was "in the long-term interests of every ratepayer in this state".

But a failure to properly manage the mergers has resulted in at least two merged councils considering legal action and another, Central Coast Council, requesting a government bailout to pay its thousands of council staff and suppliers. On Friday it was suspended and the government appointed an administrator.Inner West lost its chief executive last week as its finances deteriorated.

LSI Consulting – which has analysed the performance of councils for three decades and provided consulting services to councils around the country to find efficiencies – said the problems emerging in NSW councils in recent weeks were the tip of the iceberg.

"Mismanagement, a lack of transparency and inefficiencies due to a failure to control costs and understand efficiencies and productivity sums up what's going wrong with councils," LSI principal Ian Fahy said.

He said not only merged councils but councils across the country needed an overhaul.

Mr Fahy said COVID-19 would put further pressure on council finances, leaving ratepayers to foot the bill through increased rates, which had outpaced inflation in the past decade in NSW and Victoria. "Rates will have to rise because councils have lost so much money. They will either have to get the money from state or federal grants or apply for a special rate variation."

He said there was little appetite from state and federal governments to make councils more accountable and productive, with at least half the councils in NSW and Victoria going backwards financially in the past three years.

A NSW government spokesman said the government did not commission the report and could not comment on its findings. He said the state government provided record funding to support the new councils with more than $627 million provided towards upfront costs of amalgamation and infrastructure.

"Northern Beaches Council, for example, is on track to almost double the estimated savings from amalgamation with a projected $161.6 million saving over 10 years," the spokesman said, adding that the government was resolutely committed to strengthening the sustainability, performance, integrity, accountability and transparency of the local government sector.

Using the published audited financial statements of NSW's 128 councils, LSI created a productivity index to measure the operating performance of councils dating back to 2016, when NSW forced the super council mergers.

Using a definition of measuring productivity approved by the Productivity Commission it found that more than half had gone backwards over the period. LSI also analysed the accounts and calculated that accumulated operating losses across the 128 councils was $1.5 billion, excluding state and federal grants as they include handouts rather than operational income.

These figures, released exclusively to the Herald, reveal that 19 of the 20 super councils have lost money since the merger and chronically underperformed the remaining 108 NSW councils that weren't forced to merge.

LSI's figures reveal that, of NSW's 128 councils, eight of the 10 worst-performing were merged councils.

The data showed that the productivity index of the 20 merged councils went backwards 16 per cent since amalgamation, compared with a deterioration of almost 1 per cent for the remaining 108 NSW councils.

The government said at the time of the mergers that they would not result in redundancies for three years and that hundreds of millions of dollars in sweeteners would be granted to the councils to help with the costs of merging. However, some councils said the sweeteners were not enough to fund the mergers and that a lack of adequate funding is a reason for the poor performance.

LSI's Fahy said the problem was councils weren't given a blueprint or model on how to merge. "Three years later there should be improvements but the figures aren't indicating that."

The worst-performing council in NSW was Bayside Council, formed from the merger of Botany Bay and Rockdale City councils. Its productivity has gone backwards since the merger, losing the equivalent of $155.7 million in productivity losses over three years.

Bayside has been criticised by residents for spending nearly $7 million of a $10 million government grant on astroturf for two neighbourhood parks, a project that was not raised by anyone at an outsourced community consultation.

"At no time did the community ever ask or request for synthetic turf to be installed at either Arncliffe Park or Gardiner Park," resident Garnet Brownbill said. "This went against consultants' recommendations and advice due to flooding and other concerns at both sites, and has meant that costs have blown out."

A council spokesperson said the Gardiner Park upgrade was selected to meet the growing demands of the community. Of the council's overall financial performance, the spokesperson said: "On a cumulative basis, for the past four financial years since amalgamation, Bayside has reported an operating surplus of $162.5 million (including capital grants and contributions) or a surplus of $17.9 million (excluding capital grants and contributions)."

Mr Fahy disputed the council's figures and said part of the deterioration in productivity since the merger was due to a blowout in labour and other costs.

The council is still running three separate rates systems across the local government area, though it will need to harmonise rates before the state government's deadline of July 2021.

Central Coast Council is in financial strife and said it needed more than double what it was given by the state government.

Announcing the appointment of administrator to the council on Friday, Minister for Local Government Shelley Hancock said: "There is a clear need for greater oversight and control over the council's budget and expenditure to restore its financial sustainability and importantly reinstill the community's trust in the effective functioning of their council."

Cumberland Council mayor Steve Christou described the merger as a "dud deal". He said the promised savings had not materialised and the government had not provided enough funding to cover the merger costs.

Mr Christou said Cumberland was dealt a further financial blow when the government changed boundaries, stripping it of the industrial rates collected from Silverwater, which was instead allocated to Parramatta. He said the council had embarked on a huge productivity drive and was hoping to be in the black next year.

That council was formed in 2016 with the amalgamation of Wyong and Gosford councils. On October 6, a draft interim report provided to council indicated an expected budget deficit of $89 million, doubling the expected $41 million deficit. It has blamed the liquidity issues on the merger and COVID-19. There are also indications funds may have been misappropriated, with an investigation under way.

"If this government stands by their decision [to force amalgamations], the onus is on them to support forcibly merged councils through the full 10-year period their own modelling predicted it would take to achieve any financial benefit," Ms Scott said. "A clear-eyed and transparent approach to the financial sustainability of local government has now become even more critical as the nation struggles to recover from the economic fallout of the COVID pandemic."

Professor Joseph Drew, an expert in local government from the University of Technology, Sydney, said at least half a dozen amalgamated NSW councils were, or would soon be, experiencing similar problems to the Central Coast Council, while those that had not been merged were feeling the financial strain of the coronavirus crisis.

"I'd like us to get proactive and give them the help they need before it gets to a disaster situation. And there are a lot of danger signs. Councils across Australia are in financial stress," he said. "When councils fail, people suffer. Where I see this heading is a lot of people getting hurt."

The state government's Stronger Communities Fund was intended to prop up councils affected by mergers by issuing grants for community projects but is now under investigation by the Auditor-General and the subject of a parliamentary inquiry over claims its $250 million grants round was used as a pork-barelling tool during the 2019 state election.

"Many of the costliest decisions about staffing and IT at amalgamated councils were made after elected representatives had been sacked and the government's handpicked administrators were installed," he said.

"The truth is that amalgamations are very costly and very difficult, and the government should have fully funded these mergers instead of leaving councils to fight for scraps to survive."