A legion of ‘Tommys’ to say thank you: RBLI workers apply the finishing touches to silhouette statues of the pensive soldier as the nation is urged to put the figures in their windows to mark VE Day

A team of injured veterans and disabled workers at Royal British Legion Industries is putting the finishing touches on a Tommy in the Window display for Brits to mark VE Day 75 this Friday from the safety of their homes.

May 8, Victory in Europe Day, is marked every year by events to remember the end of the Second World War in Europe, but the coronavirus lockdown means many events had to be cancelled on its 75th annviersary.

Lord Richard Dannatt, the former head of the British Army, is backing RBLI’s Tommy in the Window campaign so the British can still mark the poignant day in history.

General Lord Dannatt said: ‘This is a good time to remember that the nation has been through difficult times before and has come through challenges by pulling together. The RBLI Tommy figure represents the price of victory and this special edition Tommy remembers many lives lost and many sacrifices that won peace for Europe in 1945. As the Tommies are made by veterans they also represent our country’s support for veterans today.’

‘We have had to rightly change our way of life because of COVID-19 but we should not let it get in the way of commemorating the 75th anniversary of VE Day whilst at home.’

‘Public mood is low, but we owe it to ourselves as a nation to recognise those who gave their lives in the Second World War, and also those who endured so much at home, to win us our freedom. 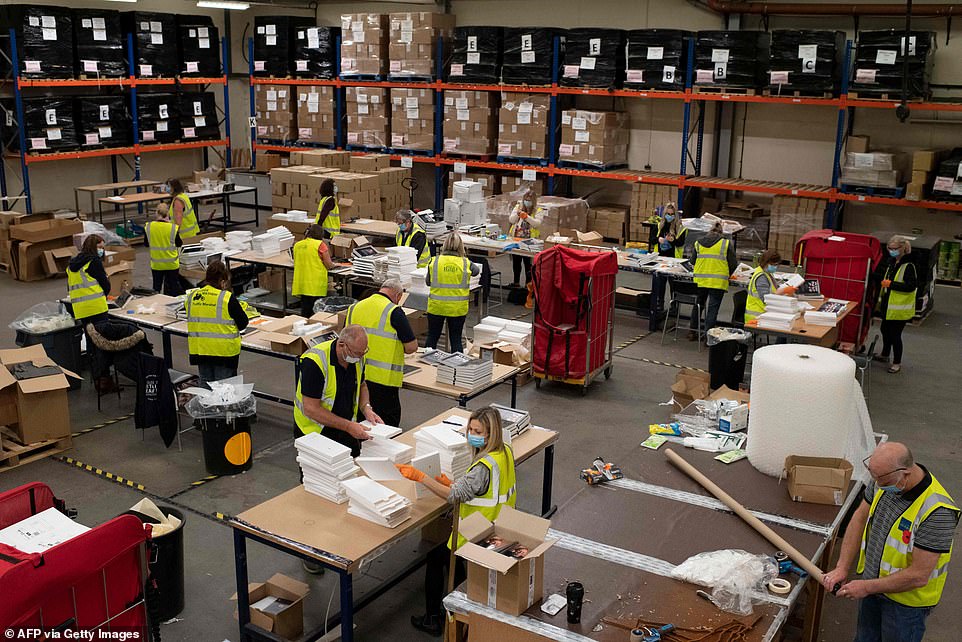 Staff at Britain’s Bravest Manufacturing Company in Aylesford, Kent, have been putting together Tommy figures and stickers to mark the 75th anniversary of Victory in Europe Day on Friday, May 8 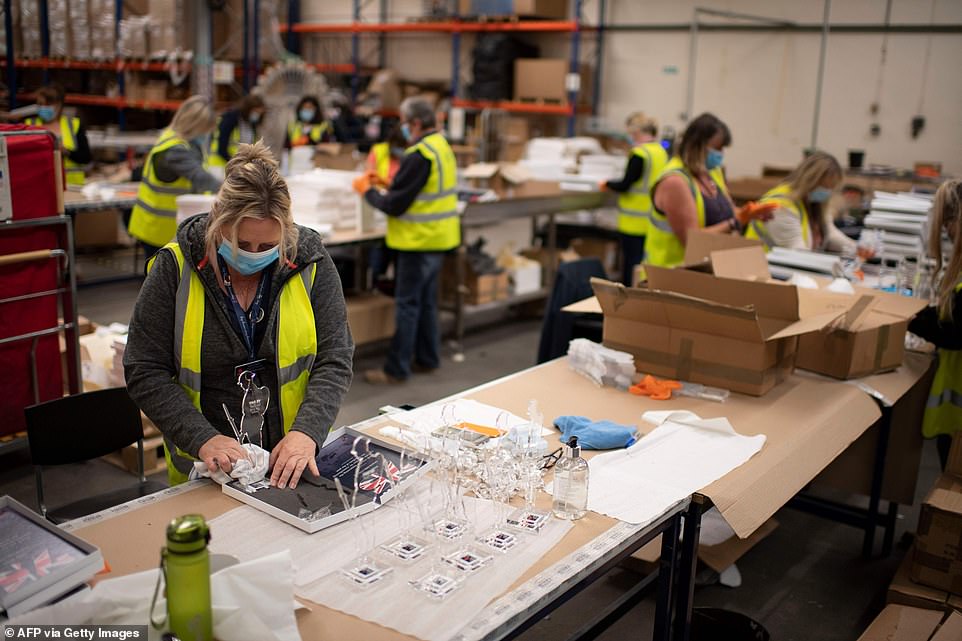 The Aylesford factory hires army veterans and people with disabilities, despite the country being in lockdown, workers have still been working hard to create Tommies in time for VE Day 75 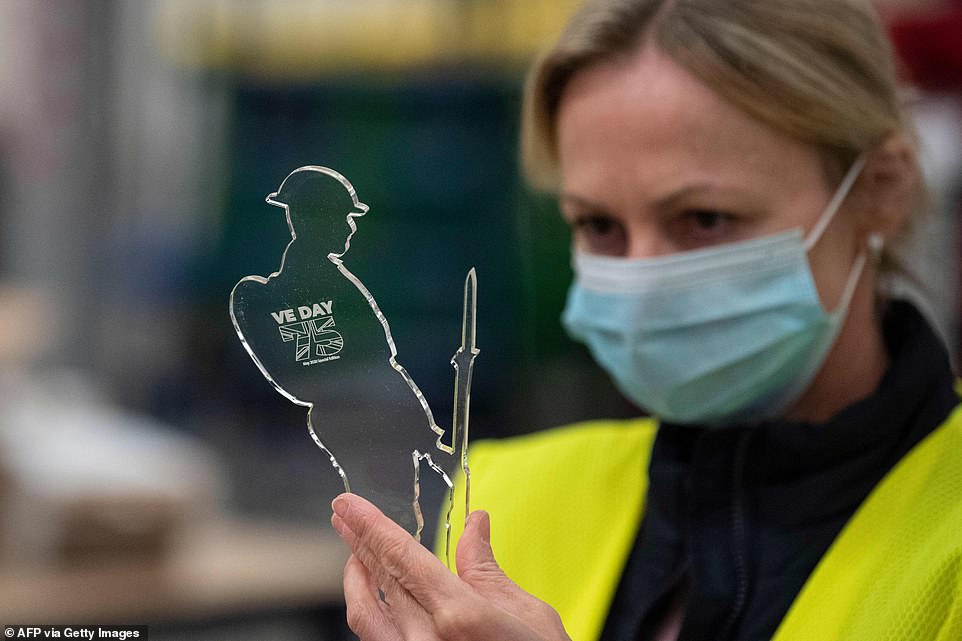 RBLI has said popular demand will lead to some of the 10″ Tommy statues arriving after VE Day, but window stickers will still arrive by Friday 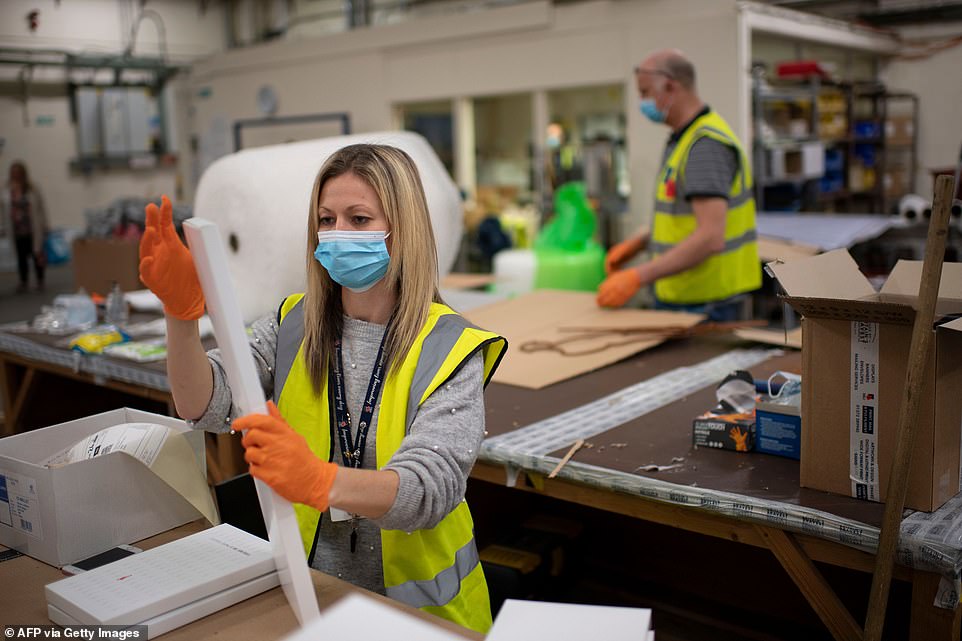 The RBLI’s Tommy in the Window set is available to buy online here.

It also comes with a special edition certificate signed by veterans from our factory, a VE Day booklet and a VE Day window sticker, all housed in a commemorative box.

The RBLI website has warned customers that high demand means the Tommy figure may not arrive in time for May 8, but the special edition window sticker will.

All the money raised through the sale of the Tommies goes directly to supporting ex-servicemen and women through RBLI’s services, which includes its social enterprise factory, and supported homes.

RBLI’s social enterprise, Britain’s Bravest Manufacturing Company, is based at RBLI Village in Aylesford, Kent which also provides homes to more than 300 veterans and their families – many of whom have life-changing physical injuries and mental health conditions as a result of their service.

The charity is also building a cententary village, to provide more homes for veterans, which was visited by The Queen in 2019.

Much of the factory’s workforce have been deemed as essential workers during this crisis, producing pallets to support the national transport of food, pharmaceuticals and ventilators, as well as essential signage for national infrastructure projects.

RBLI also runs LifeWorks, its employment support programme for veterans and military families around the world. 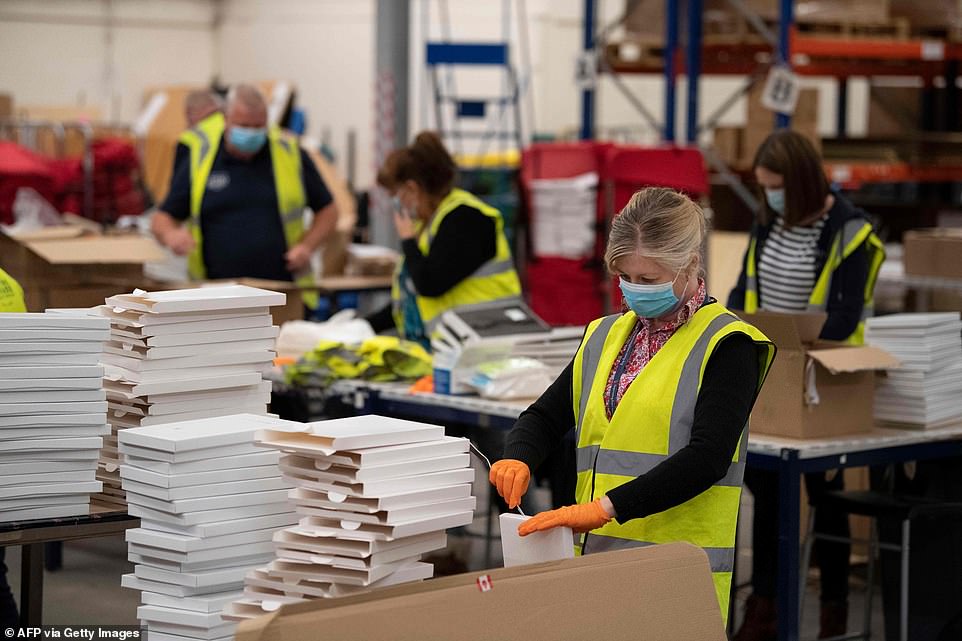 Workers and war veterans at Britain’s Bravest Manufacturing Company have been designated as key workers during the coronavirus lockdown, producing pallets to support the national transport of food, pharmaceuticals and ventilators 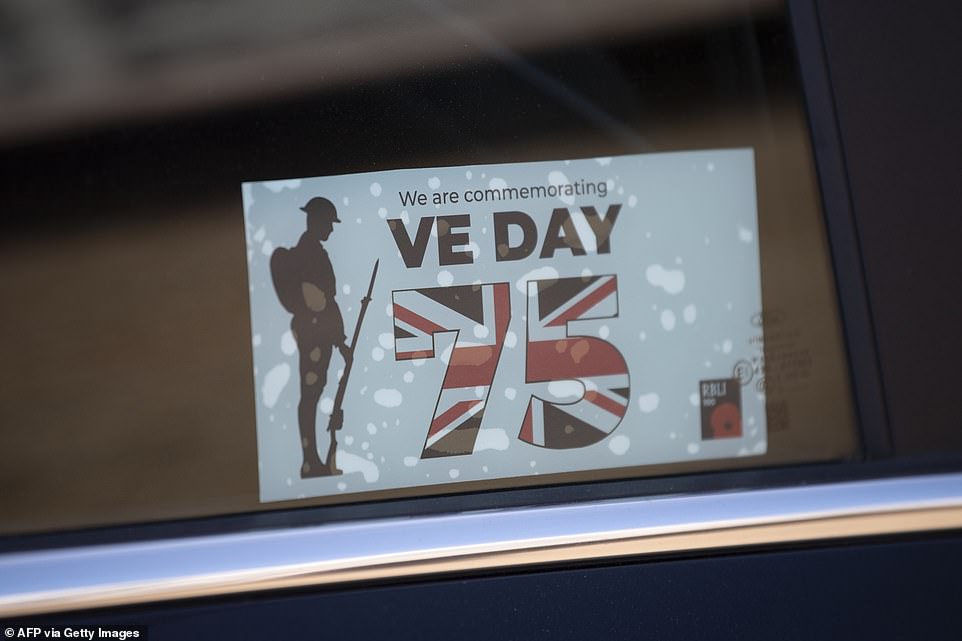 VE Day 75 stickers are being sold by the RBLI to mark the anniversary on Friday, all profits will go tward supporting ex-servicemen and women through the charity’s range of services and support homes 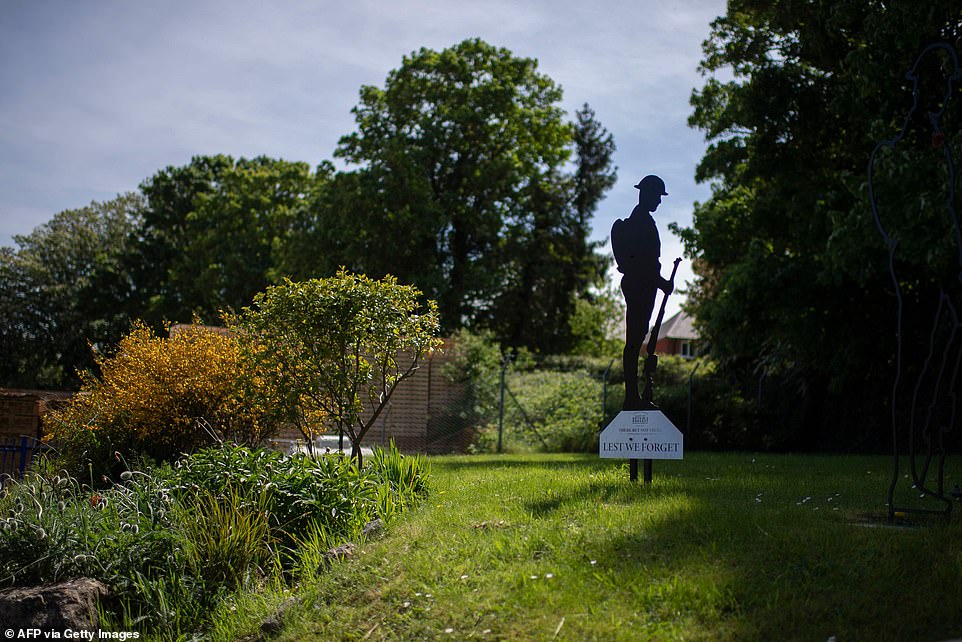 A war memorial Tommy statue stands watch in the gardens of the RBLI’s factory in Aylesford, Kent as Britain prepares to mark Victory in Europe Day on Friday 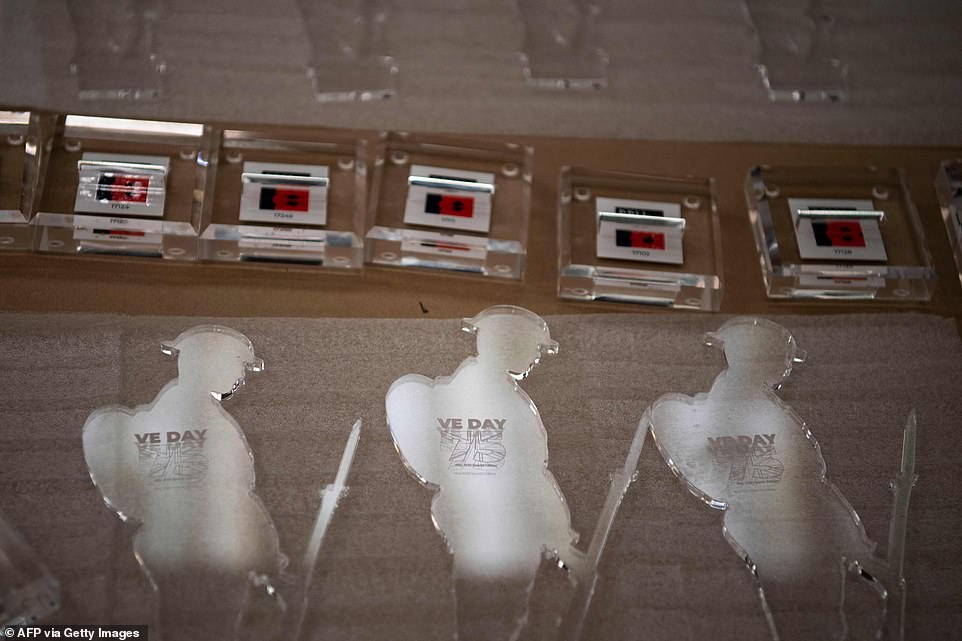 Due to popular demand, Tommy figures may not arrive to every home in time for Victory in Europe Day on Friday, but special edition stickers will, according to the RBLI’s website 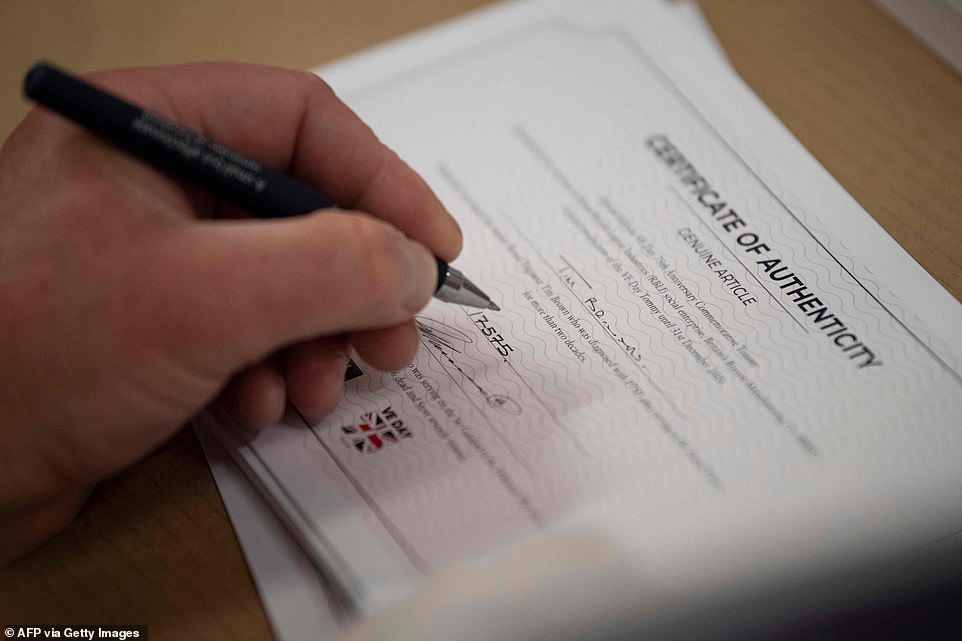 Each Tommy in the Window set will come up with certificate personally signed by workers at Britain’s Bravest Manufacturing Company in Aylesford, Kent 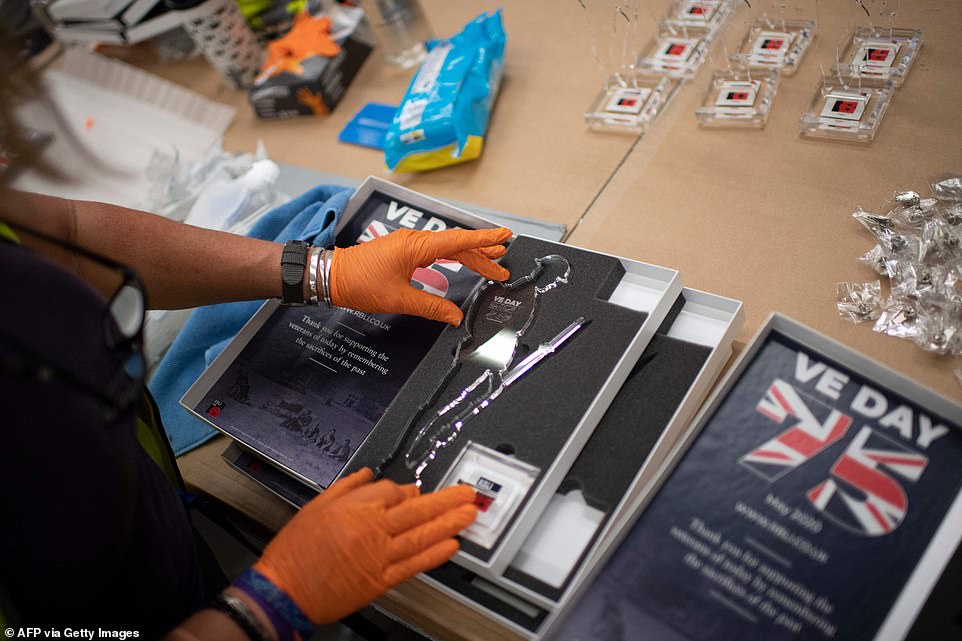 A special edition VE Day 75 booklet, 10″ Tommy Figure and acrylic stand are among the items that come with the set for £33