Australia has lifted its performance in a global mathematics and science test but disadvantaged, rural and Indigenous students still lag behind.

“We do have an inequitable system, and I think we should be focused on that. As a wealthy, first-world country, we should be looking at how we can lift those achievements.”

Dr Thomson, who is deputy CEO of the Australian Centre for Education Research, said while Victoria hadn't underperformed when compared with the rest of Australia, it hadn't improved significantly either. Queensland improved the most while students in NT were consistently outperformed.

The results show 72 per cent of Victorian year 4 students attained the national proficient standard in maths, the second-highest level behind the ACT. This fell to 67 per cent for year 8 maths.

In science, 80 per cent of Victorian year 4 students met the national proficient standard, falling to 73 per cent of year 8 students. 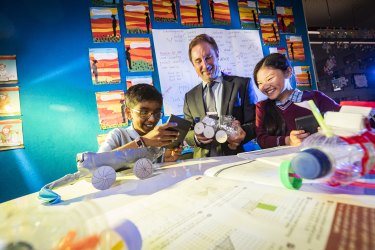 Principal Shane Davoren said staff had done a lot of professional development for mathematics and how to teach it, “so I think that's helped”.

He said teachers tried to make the subject engaging by encouraging problem solving and collaboration, and allowing students to work with students of a similar ability rather than similar age.

Year 4 student Therese said she liked learning maths and science because it would help her in the future, especially if she wanted to be an architect or a designer.

Fellow year 4 student Naethan said students got to make things and “maths is important because we use it everyday”.

The positive TIMSS result is in sharp contrast to Australia's results in the global PISA test of 2018, in which students recorded their worst-ever results in reading, maths and science.

Federal Education Minister Dan Tehan said the results suggested Australia's “education system is moving in the right direction but, as the PISA results last year demonstrated, we all must maintain our focus on student outcomes and achieving the highest standards”.

The Australian Mathematical Sciences Institute praised the results and said mathematics teachers should hold specific qualifications in the discipline.

The TIMSS assessment found at both year levels and across both mathematics and science, students from metropolitan schools performed at a higher level than students in regional and remote schools.

In addition, there was no significant difference between the average performance of female and male students in year 8 mathematics, year 4 science and year 8 science.

Catch all the day’s headlines

At the end of each day, we’ll send you the most important breaking news headlines, evening entertainment ideas and a long read to enjoy.  Sign up here.