Rishi Sunak will announce at the Budget on March 3 that the Government’s furlough scheme will be extended to the summer, it was claimed today.

The Chancellor is also said to be preparing to prolong a business rates holiday for the retail, hospitality and leisure sectors.

A year-long business rates holiday is due to expire at the end of March while the furlough scheme is currently due to be wound up at the end of April.

The moves will be welcomed by business leaders who have warned firms will need longer term support if they are to survive beyond the coming ‘cliff-edge’.

However, extending the schemes will inevitably reignite concerns about the state of the public finances as ministers continue to borrow record amounts to keep the country afloat. 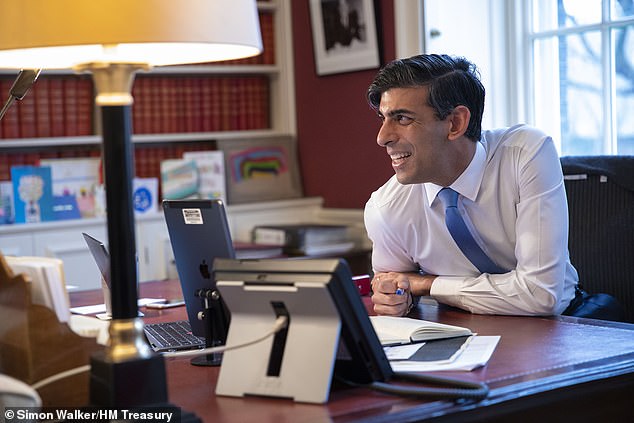 Chancellor Rishi Sunak will announce at the Budget on March 3 that the furlough scheme will be extended to the summer, according to reports

The move will be welcomed by business chiefs but it will reignite concerns about the state of the public finances after Office for National Statistics numbers published today showed state debt continues to climb above £2.1trillion

Both The Telegraph and the Financial Times reported that Mr Sunak is planning to extend furlough into the summer months before the scheme will then be phased out.

The Chancellor will be aiming to put in place measures at the Budget to prevent a wave of redundancies as lockdown is eased and as the vaccine roll-out continues.

Business chiefs warned Mr Sunak earlier this week that one in four firms will axe staff if he does not extend coronavirus financial support beyond March and April.

The British Chambers of Commerce said it would be a ‘huge mistake’ to ‘pull the plug’ on support now given that the finish line is ‘within sight’.

The reports that furlough will be extended came as Office for National Statistics data showed public sector debt surged by more than £300billion since the start of April last year when the pandemic took hold.

It means overall state debt has now hit another record high, as it continues to climb above £2.1trillion.

The Office for Budget Responsibility (OBR) has said it expects the public sector might borrow as much as £393.5 billion by the end of the financial year in March. 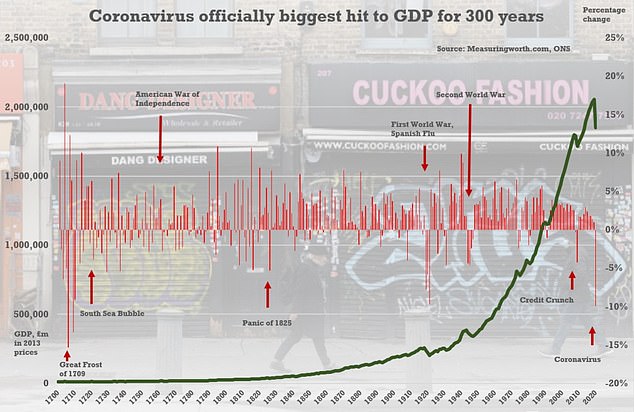 The Office for National Statistics said earlier this month that over the whole of 2020 the economy dived by 9.9 per cent – the worst annual performance since the Great Frost devastated Europe in 1709

Responding to the ONS numbers, Mr Sunak said: ‘Since the start of the pandemic we’ve invested over £280 billion to protect jobs, businesses and livelihoods across the UK – this is the fiscally responsible thing to do and the best way to support sustainable public finances in the medium term.

‘We’ve been able to respond comprehensively and generously through this crisis because of our strong public finances.

‘Therefore, it’s right that once our economy begins to recover, we should look to return the public finances to a more sustainable footing and I’ll always be honest with the British people about how we will do this.’