Home » Road to nowhere? Roundabout revamp could be a waste, say angry locals

Road to nowhere? Roundabout revamp could be a waste, say angry locals

The government will spend millions of dollars building a massive intersection in Melbourne’s north-east to solve a traffic problem that locals say will be fixed by the $16 billion North East Link.

Hundreds of trees will be felled for the project, which will replace the large roundabout regarded as a “gateway” to the bushland suburb of Eltham. 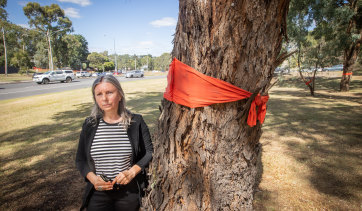 Work has already started on the intersection of Fitzsimons Lane and Main Road in Eltham – a major thoroughfare connecting Melbourne’s northern suburbs with the city and the east and used by more than 60,000 vehicles every day.

But the upgrade has been controversial among locals, who are angry about the loss of several hundred trees and the intersection’s massive size – two traffic lanes leading to Eltham widening to seven and the five lanes out of Eltham widening from three.

They also say the upgrade has been poorly planned and is a waste of resources, with the North East Link, connecting the M80 Ring Road and the Eastern Freeway via a tunnel beneath the Yarra River, set to ease traffic on Fitzsimons Lane.

The Andrews government said in 2018 the North East Link would take 14,000 vehicles off Fitzsimons Lane each day.

This is backed by the toll road’s environmental effects statement, which estimated that by 2036 traffic on Fitzsimons Lane would drop by 20 per cent – the equivalent of removing 20 years of traffic growth from the road.

Once the North East Link is built, demand for Fitzsimons Lane is “projected to generally decrease with a reduced concentration of trips from the outer north”, the statement finds. The study, which does not factor in the planned upgrade, found “traffic bound for the CBD is also less likely to use Fitzsimons Lane.”

One of the state’s top road bureaucrats agrees that traffic congestion on Fitzsimons Lane would be eased by the North East Link, but he said the traffic relief brought about by the state’s most expensive toll road would be short-lived. 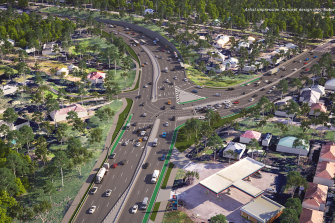 An artist’s impression of the redesigned intersection at Fitzsimons Lane and Main Road in Eltham.Credit:Victorian government

But Mr Garner said this would only serve as “temporary relief” and congestion would in fact continue to get worse.

“Our traffic modelling shows that without a signalised intersection solution, any temporary congestion relief when North East Link opens in 2027 would soon subside and the current problems would still exist and only get worse.

“We absolutely need to upgrade Fitzsimons Lane and both projects are needed in their own right. A roundabout will not alleviate the congestion and queuing issues even after North East Link opens,” he said.

Eltham resident, and former senior transport director at consultancy firm AECOM, Denis Johnston acknowledged there were 40-minute delays at the roundabout during the morning peak.

“This is not only professionally poor planning but a waste of resources,” Mr Johnston said.

The government has already felled an estimated 30 trees lining the existing roundabout, which Mr Johnston described as a “gateway” to his community – “where the bitumen stopped and the bush began”.

In the wake of local backlash against the upgrade, the Andrews government agreed to review the design and has proposed to remove two traffic lanes, reduce the intersection’s footprint by 150 per cent and save 150 trees.

But resident Sana Kojicin said the changes do not go far enough and the design was still “overkill”.

Key questions about the project, including the number and location of trees to be felled, details about a tall retaining wall and traffic modelling to justify the intersection’s size have gone unanswered, she said.

Overall, there had been a lack of consultation, Ms Kojicin said.

“MRPV [Major Roads Project Victoria] have been unresponsive in the broad sense, specifically the design hasn’t changed in response to COVID-19, the changes that the North East Link will bring,” she said.

A spokeswoman would not confirm exactly how many trees were being cut down, but said an additional 5000 native trees would be planted under the project, which amounted to about six new trees for every tree being removed.

Planning for the Fitzsimons Lane upgrade started in 2017 and took account of a future North East Link, the government said.

“The Fitzsimons Lane Upgrade is part of the $18 billion of major transport works invested in the north-east of Melbourne,” a government spokeswoman said.

“The North East Link Project and Fitzsimons Lane Upgrade have been carefully planned to give thousands of commuters better journeys every day.”

The opposition spokesman for transport infrastructure David Davis said this project showed the government was willing to “build anything to get action during COVID-19, no matter what the scope of the project or the business case or the arguments against it.”