Ben Roberts-Smith’s defamation trial has been delayed as the former soldier takes a COVID-19 test after visiting a venue in Sydney on Thursday that was also attended by a positive case.

On what was to be the 11th day of the hearing, which is set to run for up to ten weeks, Mr Roberts-Smith’s barrister, Arthur Moses, SC, informed the Federal Court in Sydney on Monday that his client was awaiting the results of a COVID test. 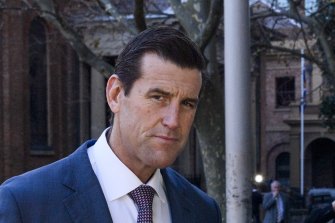 Ben Roberts-Smith arrives at the Federal Court in Sydney on Friday.Credit:Rhett Wyman

Mr Roberts-Smith had been notified by NSW Health via email on Sunday that he had been at a venue in Sydney’s CBD on Thursday morning attended by a confirmed COVID-19 case and was required to isolate while awaiting a test result. He was yet to receive a result, Mr Moses said.

The only CBD venue on the current NSW Health list of exposure sites is the MLC Centre food court in Martin Place, between 9.50am and 10.20am on Thursday.

Mr Roberts-Smith was likely already in court, which starts at 10.15am, at this time. He may have been advised to take a test if he visited the food court slightly before 9.50am.

Mr Roberts-Smith is suing The Age and The Sydney Morning Herald for defamation over a series of reports in 2018 that he says portray him as a war criminal and accuse him of an act of domestic violence against a woman with whom he was having an affair.

He denies all wrongdoing. The media outlets are seeking to rely chiefly on a defence of truth, but also argue he is not identified in some of the articles.

Barrister Nicholas Owens, SC, started his cross-examination of Mr Roberts-Smith on Thursday and was expected to continue for the bulk of the week.

Mr Moses said Mr Roberts-Smith’s legal team had asked the newspapers’ legal team whether his cross-examination might continue by way of audiovisual link, but this was not agreed.

Justice Anthony Besanko agreed to adjourn the hearing until 2.15pm to allow the test result to be received, although a small number of administrative matters were dealt with first on Monday morning.

Participants and observers in the courtroom, including barristers who were not speaking, wore masks in court in line with restrictions announced by the state government on Sunday.

NSW recorded two new local cases of COVID-19 on Sunday, prompting an expansion of existing restrictions throughout Sydney and the state.

As of Sunday, there were nine cases associated with the eastern suburbs cluster.

The initial case in NSW was a driver in his 60s who interacted with international air crews.

People in seven local government areas – Randwick, Bayside, Canada Bay, Inner West, City of Sydney, Waverley and Woollahra – will now also have to wear masks indoors, including in retail settings, unless they are eating or drinking.

Masks on Sydney public transport, which were made mandatory in Sydney on Friday, will now also be required in Shellharbour and Wollongong until Thursday.