The US embassy in Kyiv has claimed Russian forces shot dead 10 people waiting for bread in the Ukrainian city of Chernihiv.

It did not cite what evidence it had of the attack in a statement posted on its official Twitter site and on its Facebook page.

However a video has started circulating appearing to show victims of the massacre lying dead on the pavement.

In a statement the embassy said: ‘Today, Russian forces shot and killed 10 people standing in line for bread in Chernihiv.

‘Such horrific attacks must stop. We are considering all available options to ensure accountability for any atrocity crimes in Ukraine.’

Moscow did not immediately comment on the statement and has continually denied attacking civilian targets.

But countless images of bombed out residential blocks and stories of children and entire families being killed paint a very different picture.

Today, Russian forces shot and killed 10 people standing in line for bread in Chernihiv. Such horrific attacks must stop. We are considering all available options to ensure accountability for any atrocity crimes in Ukraine. 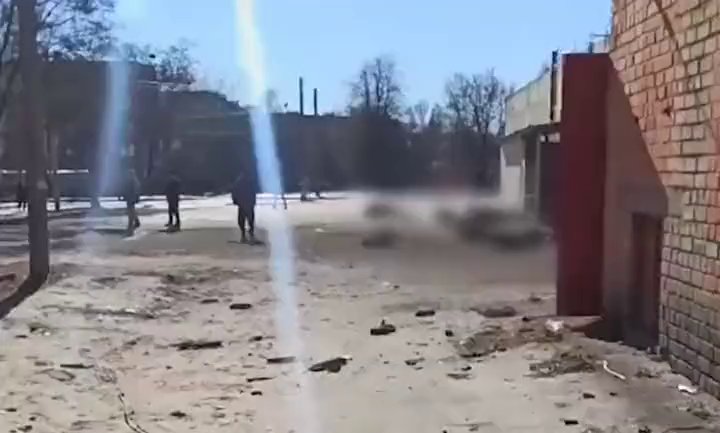 It comes after Vladimir Putin’s forces held hundreds of patients and staff hostage at a hospital in the besieged city of Mariupol.

Regional governor Pavlo Kyrylenko said around 400 people were being held against their will.

Reports suggest that people were moved into the hospital from neighbouring houses and anyone who tries to escape is being shot at.

Peace talks between both sides have been ongoing, with Ukrainian President Volodymyr Zelensky saying Putin’s demands have become ‘more realistic’.

Russia has continually pressed on its demand for Ukraine to drop its bid to join NATO, adopt neutrality status and to ‘demilitarise’.

In a telling statement, Zelensky said he realised NATO had no intention of offering membership to Ukraine.

He said he would consider taking a neutral stance if security was guaranteed from both the West and Russia.

‘We have heard for many years about the open doors, but we also heard that we can’t enter those doors,’ he told European leaders.

‘This is the truth, and we simply have to accept it as it is.’