A mass grave thought to contain the bodies of some 30,000 victims of Rwanda’s genocide has been discovered in a valley near the capital.

Fifty bodies have so-far been exhumed from the valley, which has a dam across it, but rescue efforts are being hampered by water filling the dam and the country’s coronavirus lockdown.

The discovery is being hailed as one of the most significant in years and was made ahead of the 26th anniversary of the start of the genocide on April 7. 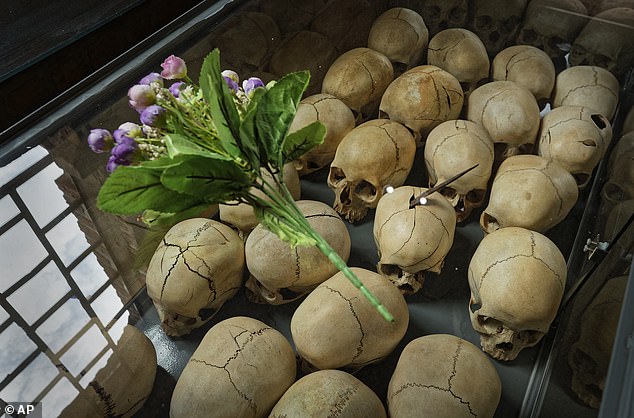 A mass grave containing the remains of an estimated 30,000 Rwandan genocide victims has been found near the capital Kigali (file image, the skulls of victims in a memorial)

Word of the valley dam and the bodies it held emerged as many people convicted in the genocide are being released from prison after serving their sentences and offering new information on mass graves.

Other information on the dam came from nearby residents.

‘The challenge we face now is that the valley dam contains water, but we are trying to dry it up,’ Naphtal Ahishakiye, the executive secretary of genocide survivor organization Ibuka, told The Associated Press.

The valley is outside the capital, Kigali, in the country’s east.

Authorities said the dam was dug years before the genocide to provide water for rice farming.

‘But we try our best so that we give the dead a decent burial.’

Rwanda will mark the anniversary of the genocide on television and social media as gatherings are banned. 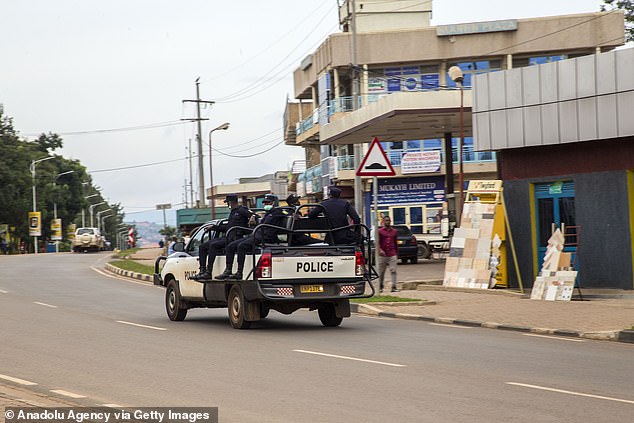 Around 50 bodies have been exhumed so far, but efforts are being hampered by the country’s coronavirus lockdown (pictured, police on the streets of Kigali)

The majority of Rwandans are ethic Hutus, but the country was ruled by the Tutsi minority for decades until 1959 when the Tutsi monarchy was overthrown.

In 1990, a Tutsi rebel group called the Rwandan Patriotic Front that had formed in Uganda invaded the country.

After several years of guerrilla fighting, a peace deal was signed in 1993 between President Juvénal Habyarimana and RPF leaders.

However, the fragile peace lasted only until the night of April 6, 1994, when a plane carrying Habyarimana and Cyprien Ntaryamira, president of Burundi and a Hutu, was shot down.

The Hutus blamed the RPF for the attack and enacted a ‘final solution’ to rid the country of Tutsis, with militias handed lists of names and told to kill them.

Neighbours turned on each other, husbands murdered their Tutsi wives, and there were even accounts of priests and nuns killing those who sought shelter in churches.

By July 15, almost 800,000 people had been killed – a massacre which only stopped when the RPF took control of the capital, causing some 2million Hutus who perpetrated the genocide or feared reprisal attacks to flee.