Shock moment 'protester punches Trump fan, 72, in head and flees in his golf cart after argument over flag'

A PROTESTER allegedly punched a pro-Trump supporter in the head after the two got into an argument over a flag.

A man in his 20s was filming the encounter with the 72-year-old fan of President Donald Trump that happened in Florida on October 10. 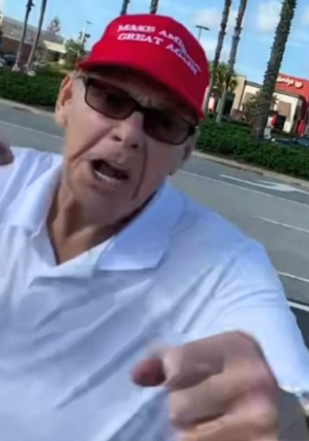 Video shows the older man walking over to the protester's golf cart and taking photos of the flag secured to it, which cops said contained profanity.

The older man tried taking the protester's photo, telling him to take his face mask off.

"It's my right to protest, sir," the demonstrator said. "Have a nice day."

Standing in the highway, the older man continued to take pictures of the golf cart's flag. 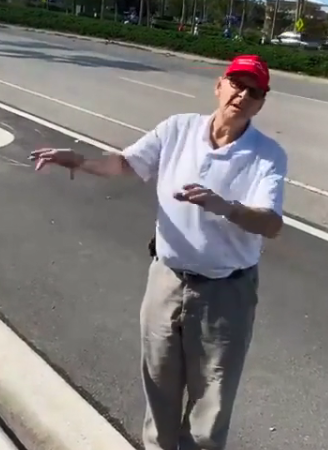 "Or you can stand there all f**king day, I don't care," the protester says as the 72-year-old gets closer.

The older man told the young man he has the right to "say whatever you want" – but claimed he doesn't have the right to "display vulgarity."

"Call the cops and see what they say," the young man says before the older man walks over and tells him: "Listen, you motherf**ker."

The older man continuously gets closer and points his finger at the younger man, calling him a "motherf**ker" and a "son of a b***h."

The young man repeatedly shouts: "Get out of my face or you're gonna get hurt!"

The older man seemingly eggs the protester on – appearing to raise a fist and shouting profanities at the protester.

The video then shows the older man stumbling backwards and falling to the ground.

"I told you to back up!" the protester shouts in the footage. "I'm defending myself!"

The 72-year-old is seen laying on the ground as the protester gets in the golf cart and drives off after exchanging more jabs with the older man.

The protester drives off as someone in the background tells him "to get back here."

The St Johns County Sheriff's Office said the young protester "punched the elderly gentleman in the head, knocking him to the ground, before taking off in his golf cart."

The younger man told WJXT: “Violence is against everything I believe in."

"I only believe in using violence in pure self-defense. I’m not proud of this. I’m not happy that it happened," he said.

"He was obviously an older man," the protester said. "I knew that it was going to get twisted and misconstrued. I just knew it was a disaster I was just trying to counterprotest peacefully.”

The older man said he didn't seek medical attention, but the news outlet reported he had visible arms and bruises on his body.

The 72-year-old said he “was kind of stuck down there. As I said, I was kind of out of it for a little while. I didn’t blackout, but I did feel disoriented."

“I crawled over and I tried to get up on my feet by allowing myself to prop up on the front part of his golf cart. He took off so quickly, I thought he was going to run me over."

The older man went on to say the younger man "has to rethink his whole attitude about things. Clearly, this political environment we’re in does not need to resort to violence."

"In respect of what he said, I did not touch him. If I did anything, it was in a defensive mode.”

Cops said no charges have been filed in the case.