This is the moment a tractor driver rams into hunt saboteurs in their pickup truck after they tailed suspected hunters through rural Sussex.

West Kent Hunt Sabs campaigners were shunted by the vehicle, allegedly driven by a hunt supporter, on Saturday, with the incident captured on camera.

The group had been tailing suspected hunters in East Sussex and Romney Marsh Hunt (ESRM) in Brightling, East Sussex when the altercation began. 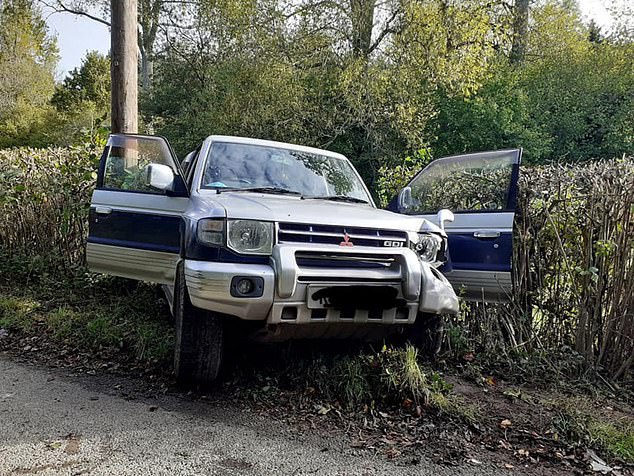 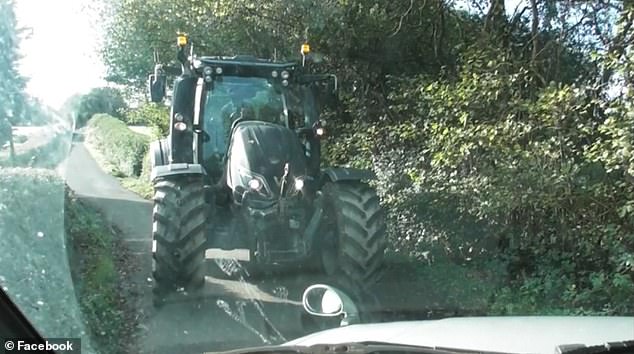 West Kent Hunt Sabs campaigners were shunted by the vehicle, allegedly driven by a hunt supporter, on Saturday, with the incident captured on camera

Two men inside the truck exclaim in disbelief as they are shunted.

At one point a man gets out to confront the tractor driver, but his friend urges him back inside saying: ‘Get in, get in, get in.’

The man gets out of the car again to record the tractor as it ploughs into the front of their vehicle.

The tractor reverses after hitting them and one of the men can be heard on the phone to police saying: ‘I need the police urgently there is a tractor running into my car.’

The tractor slowly approaches the vehicle again, as the man further says to police: ‘I need the police urgently. There is a tractor that is just smashing into my car and driving me off the road, he is still doing it.’

As the man continues to speak with police the tractor slams into the front of the car, plastic and metal can be heard twisting and creaking as the car is overpowered.

Another saboteur group, South Coast Hunt Sabs, also claimed their vehicle had been rammed and shared images of their damaged Land Rover on Facebook appealing for more information.

‘Here is a short clip of the appalling incident that occurred yesterday while sabbing the East Sussex & Romney Marsh hunt.

‘After blocking us in for 20 minutes, supporters of the hunt repeatedly drove their tractor into our vehicle causing serious damage. After this the tractor drives to ram into South Coast Hunt Sabs vehicle.’

South Coast Hunt Sabs posted on Saturday after their car was also damaged saying: ‘We were rammed and damaged today by the ESRM hunt lackies. 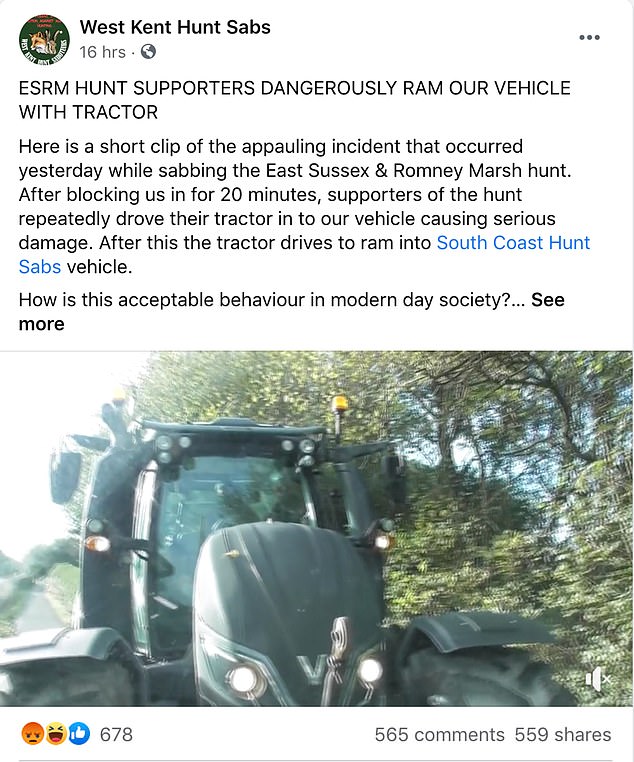 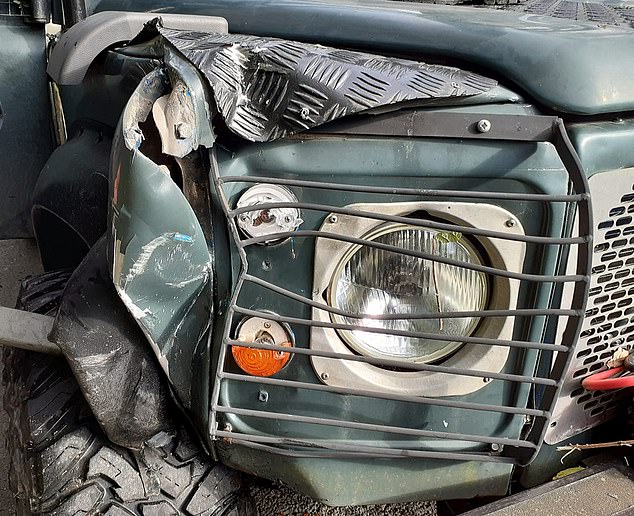 ‘We are not sure how much repairs will cost at the moment, but our main concern is that the damage isn’t too serious.

‘Our Landrover is currently limping and making terrible noises. We really need our vehicle back on the road as we managed to Sab hunts and shoots four times this week.’

However, some defended the tractor driver, such as Dennis McKee, who said: ‘You shouldn’t be trying to interfere with their activities. You were begging for trouble. They gave it to you. Quit your crying about it.’

West Kent Hunt Sabs, ESRM and Sussex Police have been approached for comment.