Six international tennis players have been named as participating in suspected fixed matches at tournaments in Brazil and Egypt in 2018, as part of a Victoria Police investigation that has allegedly uncovered a corrupt global betting syndicate.

The sensational allegations, which are also under investigation by the sport's UK-based anti-corruption agency, the Tennis Integrity Unit, centre around a series of matches played in late April 2018 at the Brazil F1 Futures tournament and the International Tennis Federation's Egypt F15 Futures tournament. 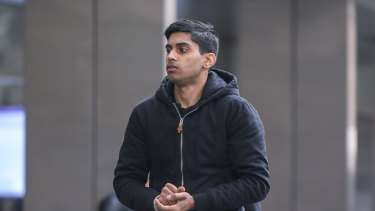 Harsimrat Singh outside the County Court in June 2020.Credit:Eddie Jim

The Age does not suggest any of the players did anything inappropriate or illegal, either individually or collectively, only that they are named by police as participating in matches under investigation.

TIU investigators interviewed Mr Lindell, Mr Severino and Mr Turini in Brazil in May 2018, according to the court documents. The agency has previously refused to comment on its investigation, but none of the players are known to have been the subject of any kind of action.

The allegations of match fixing came to light during an investigation by Victoria Police's sporting integrity intelligence unit into reports of suspicious betting patterns by two Indian nationals living in Melbourne, Harsimrat Singh and Rajesh Kumar.

Mr Kumar has pleaded not guilty and will contest his charges at committal later this month. Mr Kumar's charges involve different allegations and issues to Mr Singh's charges.

The court was told Singh was a "pawn" for an India-based syndicate run by his cousin, Ravinder Dandiwal, who is now the subject of a global-reaching sports integrity investigation. 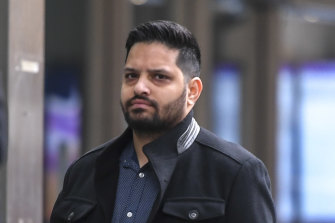 Mr Dandiwal, who runs a sports management business and promotes international tennis and cricket tournaments, was arrested by Indian authorities in July 2020 over separate sports corruption allegations. The Age does not suggest Mr Dandiwal has committed any crime in Australia or elsewhere.

"Dandiwal is the organiser of the match fixing. He … instructed them how to bet and how much; directed where to send payment to corrupted players," the agreed statement of alleged facts released by the court said.

The court heard that Singh admitted to placing wagers worth $1121, but said he was unaware the matches had allegedly been fixed or that money he transferred overseas could have gone to potentially corrupt participants.

"There is no evidence and it is not alleged Mr Singh had any involvement in the actual fixing on the matches, nor is there any evidence, significantly, of him having had any communications with any tennis players in Brazil where the matches took place," defence barrister Michael Allen said.

Mr Allen said Singh was an unsophisticated "pawn" in the wider scheme, placing bets in his own name and demurely accepting the explanation, "Don’t worry about it, kid", when he queried Mr Kumar about why most of the profits were being wired out of the country.

The assistant manager of a Hungry Jack's kept only $199 to $399 of the $1199 in profits generated for his participation in the activities.

The materials released by the court do not expressly accuse individual players of misconduct but allege Singh was instructed to bet on particular outcomes in sets and matches.

"One or more of the players had arranged with Ravinder Dandiwal to manipulate the result of the match so that Thales Turnini would win the first set and Carlos Severino would win the match, and … [Singh] used that information to bet on the event by placing a $100 bet with licensed bookmaker Crownbet at odds of 8.75, winning a profit of $775," according to one charge he pleaded guilty to.

Another charge said: "The accused possessed information in connection with a tennis match between Egyptian player lssam Taweel and French player Maxence Broville … namely, one or more of the players, had arranged with Ravinder Dandiwal to manipulate the result of the match so that Broville would win the match two sets to love".

The court was told that Singh had since turned on both Mr Kumar and Mr Dandiwal, providing information to Victoria Police's sporting integrity intelligence unit and the Tennis Integrity Unit.

"It is plain this is an industry that relies on people having faith on the legitimacy of the competitions on which they chose to bet, and offending of this nature simply flies into the face of that and brings into question the integrity of the entire industry," the magistrate, Hayley Bate, said.