London: It's a testament to the indiscriminate nature of coronavirus that even Santa has cause to feel a little less jolly this year.

While the virus was quietly circulating around parts of Europe last December, this Christmas will be the first observed under the shadow of the pandemic. Rituals are being discarded or reshaped — including traditional encounters with Saint Nick himself. 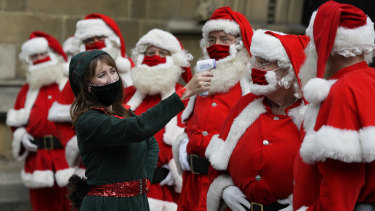 Santas have their temperature tested at a training course in London.Credit:AP

Gone are lines of children waiting to sit on his lap in London's ritzy department stores. The famed grotto at Harrods (which last year required an eye-watering minimum store spend of £2000, or $3643 to access) won't open for the first time in 65 years. Luxury food emporium Fortnum & Mason has also cancelled its popular Santa experience.

"Santa schools" saw the writing on the wall months ago and quickly set about using modern techniques to make sure the beloved gift giver does not become a superspreader. Yes, Santa is going digital.

Ministry of Fun, a UK entertainment company which runs an annual training course for Santa performers, spent months setting up Santa HQ, an app where children can enjoy a scheduled live video call with Father Christmas. It's one of a number of similar ventures popping up across Britain. 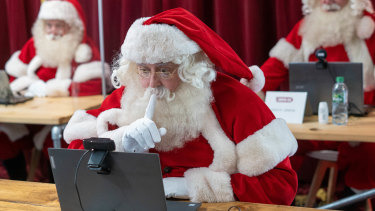 A Santa comes to grips with video technology during a Ministry of Fun training course in London. Credit:Jeff Moore

"Meeting with Santa can be magical," says Matt Grist, Ministry of Fun's managing director. "Many of us get old and cynical and don't believe in magic but while we do as youngsters, it's absolutely imperative that the experience of meeting Santa is a special and memorable one.

"There are a lot of children who would normally go to meet him in person who won't be able to this year. So instead what they can do is, from the comfort of their own sofa, talk to him from his sofa in the North Pole." 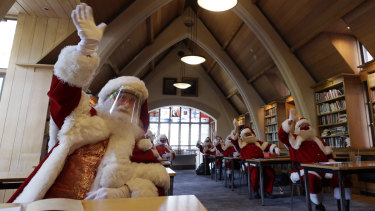 A Santa-in-waiting asks a question at a socially distanced Santa training school run by Ministry of Fun at Southwark Cathedral in London. Credit:AP

Scheduled video calls with Santa start from £30 and the conversation is helped along by information supplied by parents in advance. The Santas go through training and are given tips about quality framing and audio. An adult must be present throughout the call and all performers have been screened by the UK's Disclosure and Barring Service to make sure they are fit to work with minors.

"One thing we have found is that the children tend to be more relaxed and comfortable, which is logical because they're in the comfort of their own home rather than lining up in a queue and walking into a grotto which might be beautifully decorated but is ultimately a bit of an alien space for them," Grist says. 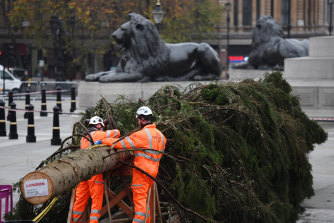 Workers install a huge Christmas tree at London’s Trafalgar Square. Norway has donated a tree for the famous plaza every year since 1947. Credit:Getty Images

Governments across Europe have assured children that Santa has all the necessary approvals to operate as normal on Christmas night. One Santa even appeared on breakfast television in the UK last week to assure young viewers that he had "Santabodies" and was therefore immune to COVID-19.

However at 1750-years-old (his origins trace back to Saint Nicholas, the Christian bishop of the maritime city of Myra in modern day Turkey), Santa easily falls into the vulnerable category and it is better to be safe than sorry.

Santa grottos are allowed to operate in Britain provided they are in venues permitted to open and have COVID-secure measures in place. Santa will not be required to wear a mask however children will be banned from sitting on his knee, a Downing Street spokesperson said.