Live from New York … it's the self-professed "rebuilding year" of Saturday Night Live! The late-night institution underwent some major restructuring between the end of Season 47 and the beginning of Season 48 — most notably the high-profile departures of some longtime fan favorite cast members. Kate McKinnon, Aidy Bryant, Pete Davidson, Kyle Mooney and Chris Redd are among those who departed Studio 8H over the summer, opening the door for a new crew of Not Ready for Primetime Players.

For longtime SNL viewers, the changeover can't help but recall memories of the notorious 11th season when creator Lorne Michaels returned to the show after several seasons away and tried to re-launch it with an all-new cast — including Robert Downey Jr., Joan Cusack and Anthony Michael Hall — the majority of whom didn't make it to Season 12. We'll have to wait and see if history repeats itself, but the writers made a point of acknowledging the awkward transition in a super-meta cold open that featured host Miles Teller commenting on the "rebuilding" happening before his eyes. (Watch the sketch above.)

The Top Gun: Maverick star also played quarterback-turned-podcaster Peyton Manning anchoring an episode of his hit Manningcast with brother Eli (Andrew Dismukes). In lieu of analyzing a football game, they opted to break down the in-progress first sketch of Season 48 — a new send-up of former president Donald Trump, who has been played by James Austin Johnson since Alec Baldwin retired the role. "Oh good, a Trump sketch," Teller's Manning sighed. "Way to mix it up." 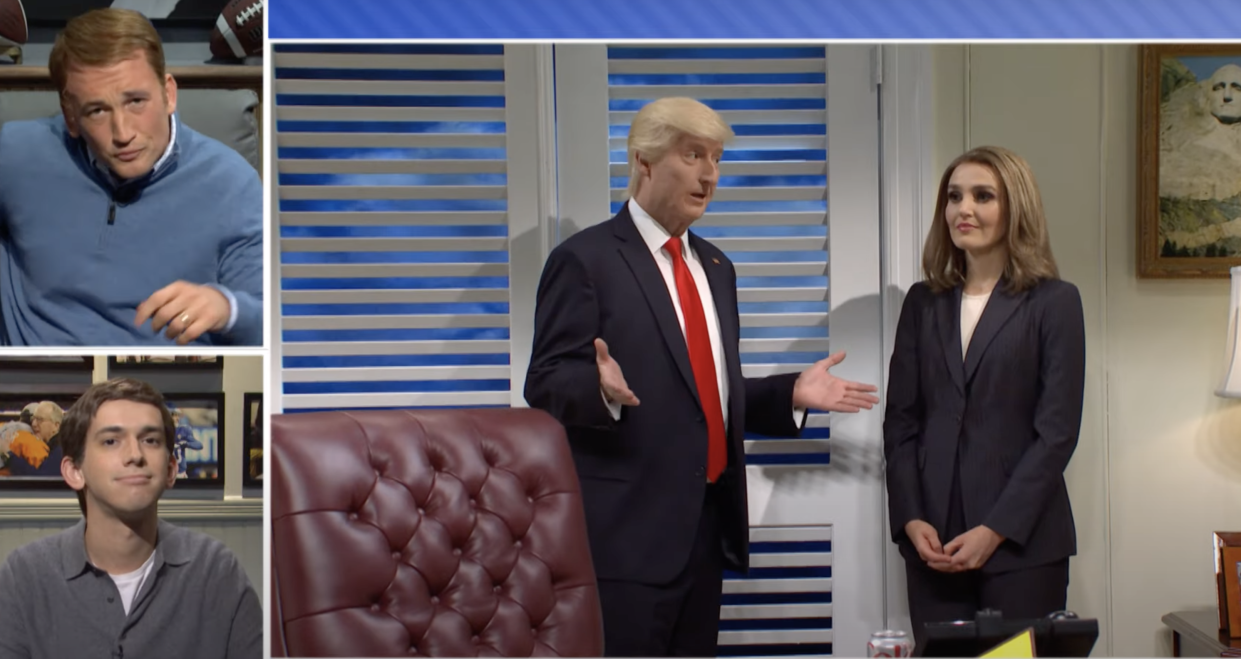 The Manning brothers kept the self-aware skepticism going as the cold open unfolded, calling out the underwhelming turns by newbies and phoned-in performances by the veterans. The duo even called in former host Jon Hamm to join in the critiques. "It's not comedy," the Mad Men star said after one particularly stiff line. At halftime, the Manning brothers counted "14 attempted jokes, 1 mild laugh, 3 chuckles" — not great stats for the freshman class.

Of course, all the ribbing was intended to be in good fun. But a good portion of the viewing audience expressed mixed feelings about the new cast, and the choice to open the season with a Trump sketch two years after he left office.

trying to decide if i like the new snl cast members

On the other hand, some viewers expressed happiness at seeing the show's infusion of new blood. Newcomer Michael Longfellow — who had a breakout spot on the Weekend Update desk, talking about his conservative Arizona family and anti-vaccine father — was a particular favorite for this crowd.

A HUGE congrats to the new cast members who did their thang last night. Great first show back! But HOLY shit I didn’t realize how many ppl are gone. Time to shine 👏👏 #SNL#SNLPremiere

Watching #snl today (dvr) and that opening monologue was hilarious! I actually have faith this may be a good year. These new cast members are hilarious!

SNL WAS SO GOOD LOVE THE NEW CAST MEMBERS season starters r usually quite awkward bcs they talk about the last season but the joke about the cast members leaving was not as awkward as other 1st episodes ,the bereal sketch was a little cringe but idc miles teller was a great host

I'm not gonna fool around and I'll straight up say it:

I salivated when the new cast member was featured on tonight's #WeekendUpdate of #SNL.
I find @LongFellowww gorgeous.
Hello and welcome, Mr. Michael Fellow

In fact, let's see his bit again, shall we?pic.twitter.com/dNaWThQf2S

Look for SNL's "rebuilding year" to continue over the next two episodes, hosted by Brendan Gleeson and Megan Thee Stallion, respectively. By the time Season 48 wraps up in May, Studio 8H will either be sturdier than ever or end with a Season 11-style mass firing … with actual fire.