Home » World News » So Biden has won the presidency – what happens next?

So Biden has won the presidency – what happens next?

Democratic Party nominee Joe Biden has reached that magic milestone, winning at least 290 votes in the US Electoral College. But while the gruelling election process might be over, the hard work for the president-elect lies ahead, not least the challenge of healing a sharply polarised nation. Before the boards even come off the nation’s shopfronts, Biden’s team of Democrats will begin the race to prepare his transition to government in Washington in 10 weeks’ time on January 20.

The incoming president needs to appoint more than 4000 people to his administration, of whom 1000 will require Senate approval, according to the Partnership for Public Service, a nonprofit organisation that advises on presidential transitions. One of the first roles the Biden-Harris team will fill will be that of the White House chief of staff, and Biden's choice of a progressive or a moderate will be closely watched as a sign of his approach to the presidency. 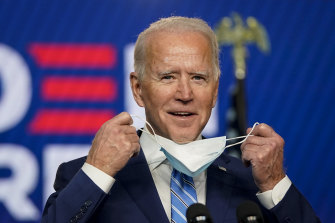 One of Joe Biden’s primary ambitions is to re-sign America to the Paris climate agreement.Credit:Getty

One of Biden’s key ambitions is to tackle the surge of new COVID-19 cases across the US, which have hit record highs in recent days. The president-elect has said he will “listen to the scientists”, including Dr Anthony Fauci, who has been sidelined by President Donald Trump, and it is expected he will take steps to establish a new coronavirus taskforce.

Biden has a long list of other promises for his first day as president, which includes rejoining the World Health Organisation and NATO, repealing Trump’s 2017 tax cuts, and easing immigration laws. He would also immediately act on climate change, an ambition he repeated the day after the election, tweeting: “Today, the Trump Administration officially left the Paris Climate Agreement. And in exactly 77 days, a Biden Administration will rejoin it.”

Dealing with the Senate

But many of these ambitions are likely to be tempered by a hostile Senate, where Republicans are on track to retain control. The emerging balance of power between Republicans and Democrats will guide the Biden-Harris team as it prepares its broader political agenda, including its economic response to the impact of the virus. Axios has reported that Biden’s team has already begun dealing with Republican senators over prospective cabinet appointees. Once selected, it will typically take a number of weeks for appointees to be vetted, including by White House and the FBI.

Meanwhile, any declaration of a Biden victory will certainly face further legal challenges from Trump.

Recounts will be called in states where the election count was close, such as Wisconsin, and yet Democrats have reason to be confident as recounts have historically shifted little more than a few hundred votes and nothing like the 20,000 votes or so votes needed to overturn the result in Wisconsin.

Legal proceedings initiated by the Trump team in Michigan and Georgia have been dismissed, but there is talk of a new challenge in Nevada on claims of voting irregularities.

In the Georgia case, the campaign alleged that 53 late-arriving ballots were mixed with on-time ballots. In Michigan, it had sought to stop votes from being counted.

State judges tossed out both lawsuits on Thursday.

With evidence for legal intervention scant, experts say Trump’s best chance of legal success is in Pennsylvania, as the conservative-leaning Supreme Court has previously indicated it could reconsider the state’s rules allowing the counting of absentee votes that arrive up to three days after election day.

However, votes that could be effected by that case have been sequestered, so they will not compromise the entire count for the state. Most of the mail-in ballots arrived on election day after a concerted sweep of ballots by local authorities.

If there are no further court interruptions, party representatives will assemble in mid-December in their respective states for the Electoral College process of formally voting for the President.

The 10-week transition period will also be a chance for Biden to take some down time after an 18-month election campaign. Analysis by the Partnership for Public Service shows the last six presidents each spent as much of their time during the transition period either on vacation, leave and “think time” as they did on meetings, security briefings and public appearances.

Trump meanwhile, will spend the 10 weeks as a “lame-duck president”. Some presidents use this time to attempt to force through key legislation. Others travel overseas seeking to build lasting diplomatic achievements for their legacy. In the last hours of his presidency in 2001, Bill Clinton issued presidential pardons to 140 people, including a number of his supporters.

So far, Trump has shown no sign that he is willing to concede. There is every chance he will be extremely active in his final days. Transition could be messy.

Understand the election result and its aftermath with expert analysis from US correspondent Matthew Knott. Sign up to The Sydney Morning Herald‘s newsletter here, The Age‘s here, Brisbane Times‘ here and WAtoday‘s here.