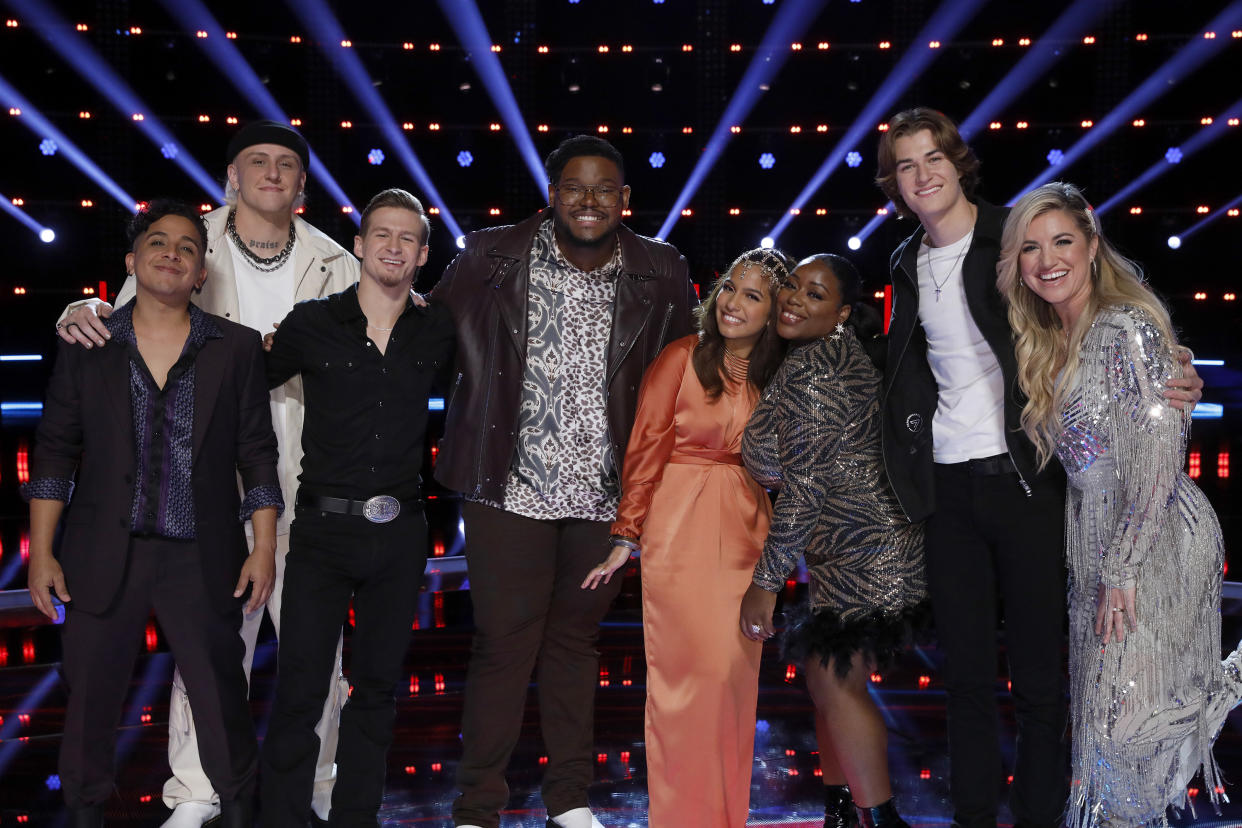 The Voice’s top eight competed Monday, on the do-or-die semifinals episode that will determine the five contestants advancing to next week’s Season 22 finale. The singers all joined forces for Whitney Houston duets, and while the real purpose there was to synergistically promote the upcoming Whitney biopic I Wanna Dance With Somebody (which premieres Dec. 23 on NBC’s sister network, USA), this rare Voice theme night posed a unique challenge for the semifinalists.

The Whitney songbook (much like the songbooks of other divas like Mariah, Celine, and Adele) is challenging for pretty much any singer. But of course, the season’s power-belters, like Parijita Bastola, Justin Aaron, Kim Cruse, and Omar José Cardona, seemed more naturally suited for such multi-octave material — while less rangy country crooners like Bryce Leatherwood and Brayden Lape, or an indie stylist like Bodie, would presumably have a tougher time.

But as it turned out, the most traditional duets — Omar and Justin doing “The Greatest Love of All,” and Kim and Parijita taking on “I’m Every Woman” — were the night’s least exciting Houston performances, even if they were capably sung. I’d assumed that Bodie and Brayden’s “I Wanna Dance With Somebody” (aka “I Wanna With Some-Bodie,” heh) would be an utter disaster, since these were contestants of wildly different genres and skill-sets. But they worked it out OK, even if I much preferred Bodie’s moments when he gave off a breezy Sting/Colin Hay/Peter Gabriel vibe. 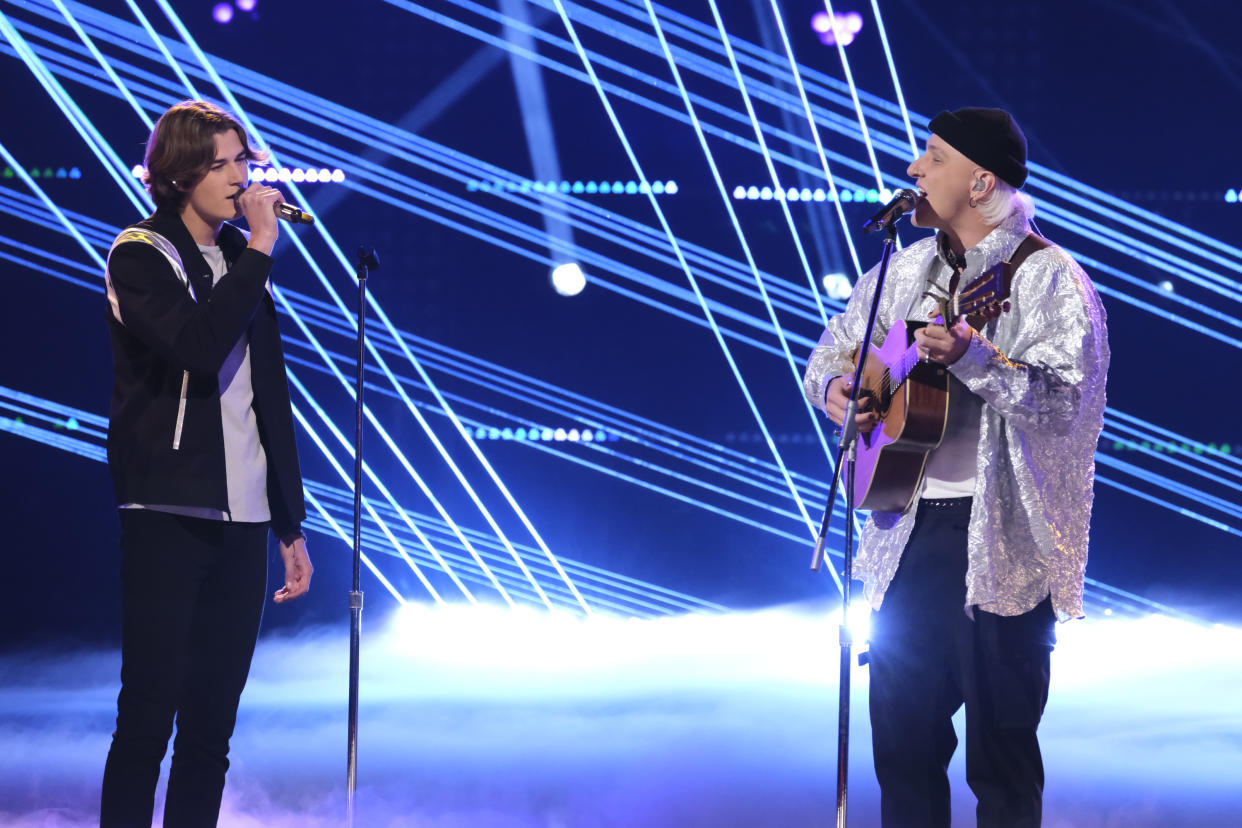 Morgan and Bryce’s “Saving All My Love for You,” with what Bryce called a “country/bluesy twist,” was actually the best of the bunch, even if I would have preferred these country singers doing the Dolly Parton-penned “I Will Always Love You.” (Yes, technically “I Will Always Love You” is a cover, but so are “The Greatest Love of All,” which was originally recorded by George Benson, and “I’m Every Woman,” which was a hit for Chaka Khan in 1978.) Anyway, Bryce is hardly a power-singer — while Morgan totally is — so if this had been a Battle Rounds performance, Morgan would have easily won. Even Bryce seemed to acknowledge this, humbly testifying and looking awestruck whenever Morgan hit her high notes. But “Saving” worked nicely as a country duet, thanks to the house band’s Kenny/Dolly “Islands in the Stream”-esque arrangement and the two singers’ sweet, easy rapport. 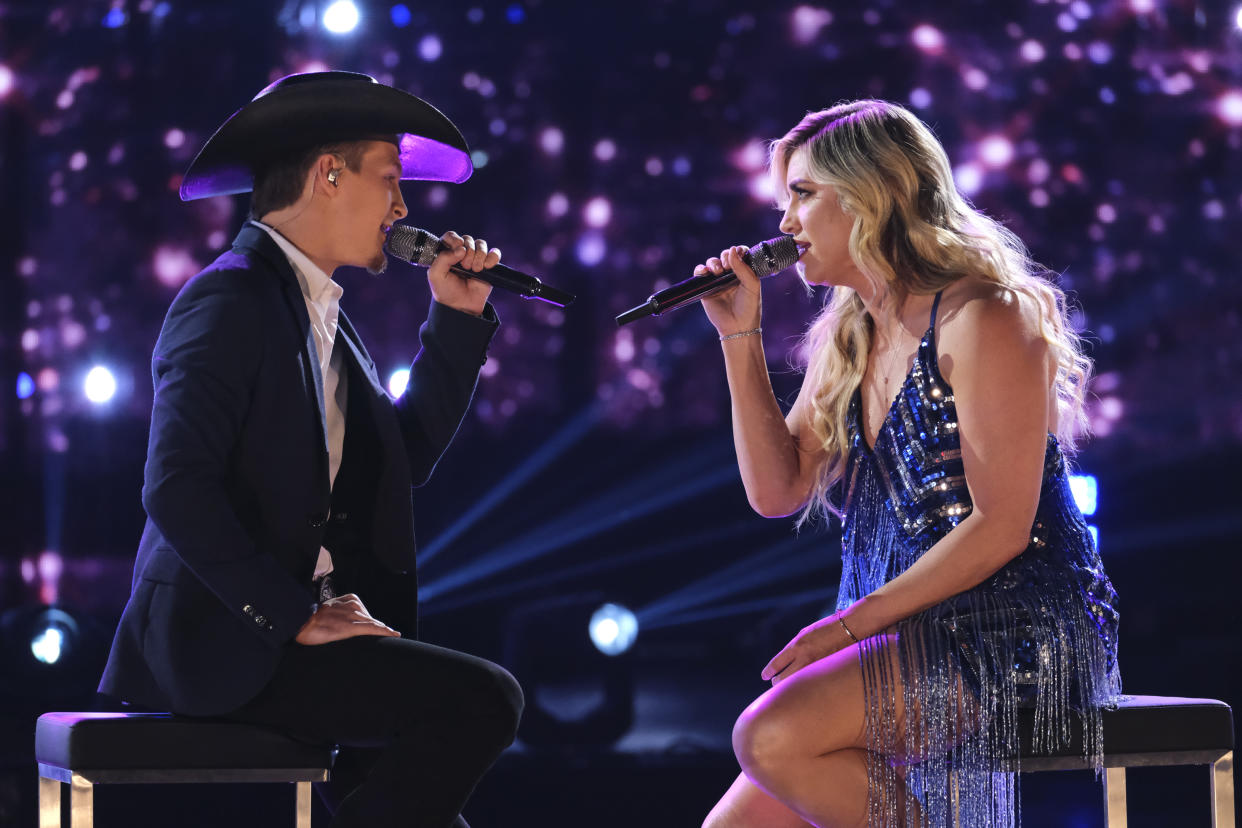 Luckily for all eight contestants, these Whitney duets were just bonus performances, with none of them receiving any feedback from the coaches or even being uploaded onto YouTube. But when the semifinalists each performed solo, Morgan was still the star of the night — and the producers were saving all their love for her, placing her last, in the pimp spot. I believe this woman is the future — of Season 22 — and we will be seeing her in the finale next week. She truly is every woman, and I think she even managed to displace Bodie and become this season’s new frontrunner.

These were the eight solos of Monday’s semifinals:

Justin dedicated this “quite theatrical” Cynthia Erivo anthem to his wife, who encouraged him to try out for The Voice, and he brought all the drama, with a big-scale, stylized production (complete with interpretative dancers and billows of dry-ice fog) and a fierce, confident delivery. “Oh, we are not messing around tonight in the semifinals. What a way to get it started!” raved host Carson Daly. “It doesn't escape me that you started the competition [by auditioning with] ‘Glory,’ my song — and then this is like ‘Glory’ on steroids,” quipped John Legend. “What I love about your performances is they always start out like big, but then you know it's going somewhere from there,” said Blake. This was indeed an awesome way to kick off Monday’s episode, but I do worry that going first, on a night crammed with a dozen musical numbers, could hurt Justin’s chance of making the top five.

Conversely, Brayden — the youngest and greenest singer in the competition, at age 16 — brought almost no drama to his Brett Young cover. Even though he was unencumbered — not playing guitar or sitting on a stool this time — he made almost no use of the vast stage, and he kept his eyes shut for much of the song. It was yet another predictable performance from a cute kid who has frustratingly coasted through to the semifinals — and possibly to the actual finals — without having to do much except, well, look cute. Blake still insisted, “I truly believe Brayden can win this show,” and Brayden is marketable regardless — Camila Cabello said she was “so excited about his career.” But Camila also seemingly threw a bit of shade when she told Brayden, “It's so easy for us to think, at this stage of the competition, ‘Oh, there's people that can really belt and pull out these Olympic, dynamic tricks.’ But you have such a gorgeous-sounding voice and it might be more subtle, but it doesn't make it less impactful. And you have so much more room to grow.” But there is no more room to grow — the finale is in just one week! Brayden was simply out of his depth tonight, and he will be next week if he makes the top five.

This was another lovely and confident performance from one of the season’s mightiest belters, but it wasn’t Parijita’s best performance or vocal; I fear she may have peaked too early and could get lost in the shuffle this week. Hopefully her big, thundering finish, when she was flanked by a tribal drum corps, was enough to make a lasting impression. The coaches were certainly impressed, giving the 17-year-old a standing ovation, with Gwen Stefani marveling, “It is shocking, the way that you are able to connect with your body and your voice at the same time and your heart. … I think that's very powerful at such a young age.” John added, “I think that the belief that you have in yourself is very infectious. It makes other people believe in you too.” We shall see.

A few years ago, Kim developed vocal polyps that completely changed her classically trained soprano voice, even after she underwent speech therapy. But John assured her, “That rasp in your voice, it gives you that unique sound that very few people have — maybe this thing you thought was a hindrance was actually your superpower.” Hopefully that superpower will power Kim to the finale, because she deserves it. As a longtime American Idol viewer, I’ve come to associate this Porgy & Bess classic with Fantasia Barrino’s iconic version, but Kim’s elegant, “super-jazzy” rendition was very much her own. (John called it a “master class in how you perform a song that's been performed a jillion times.”) “I don't know that I've ever heard you switch over into your head voice like that, and it sounded so incredible. I love it when you do the sultry, steamy thing,” said Blake. “I feel like I was just entranced in a film,” cooed Camila. Gwen even described Kim's performance as “perfect.”

Omar José Cardona (Team Legend), “My Heart Will Go On”

I thought Omar’s Celine Dion cover was an odd choice, but I was hoping, even assuming, that the rock ‘n’ roll showman would give it a Meat Loaf/Jim Steinman twist. But… he did not. Omar was much more restrained than usual, and it was clear that he wasn’t totally comfortable singing so softly. The result was a bit dreary, and I think his decision to tackle one of the best-selling, most beloved singles of all time could backfire on him big-time this week. (Remember how I just mentioned that most singing show contestants should steer clear of divas like Celine?) But Gwen thought this was so stellar that she jokingly accused Omar of lip-synching, and John insisted that there’s absolutely nothing that Omar can’t sing. Blake wise-cracked, “I swear, all across America right now, old men are getting up out of their EZ-chairs and picking up their toupees off the floor and putting them back on. Old ladies’ curlers flew out of their hair!” I think Blake meant that as a compliment. And maybe Blake was right, and this performance will actually appeal to The Voice’s rapidly graying viewing audience. Again, we shall see.

Bodie (Team Blake), “Without Me”

Bodie — “one of the most unique artists we've had on this show,” as Blake rightly noted — has had a truly amazing run as of late. But this week, I started to worry that he also may have peaked too early. Doing his first cover of a female artist, he was vocally straining much more than usual, and was uncharacteristically off-pitch. He also wasn’t as creative, arrangement-wise, as he had been with previous game-changing, bar-setting performances like “I'm Gonna Be (500 Miles)” and “Golden Hour.” That being said, this flashy, VMAs-style number, combined with his past momentum, will no doubt ensure that Bodie makes the top five; I’m just no longer certain that Bodie can win the whole show. But Bodie does have a career ahead of him, no matter what. John told him, “I just see a path for you as an artist, like making records, out touring, and doing all the things you're supposed to do as an artist. And some people are really great singers, but I don't see that path for them. But I really see it for you.” (Side note: John’s comment was a bit shady to the other contestants, was it not?)

Bryce Leatherwood (Team Blake), “If Heaven Wasn’t So Far Away”

This was another unoriginal performance from Bryce, but he was solid and much more emotionally invested than usual during this Justin Moore weeper, which he dedicated to his grandparents. Gwen called him “so authentic and so classical and old-school… everything that you want to see in a country artist.” John claimed this “pitch-perfect” and “glorious and bold and soulful” performance was Bryce’s best yet. And Blake told Bryce, “You just engaged the army of country music fans that watch this show. … You're the kind of guy that they want to represent them in this genre.” I will say, if there is room for only one Team Blake country crooner in next week’s finale, I would much prefer that the slot go to Bryce than to Brayden.

But the real country star of Season 22 isn’t on Blake’s team. It’s Camila’s last woman standing, right here. Swapping her blues guitar for a piano and a violin accompanist, Morgan brought a different, quieter vibe this week, but she sacrificed none of her usual passion and fire and drama. This was phenomenal, and I will indeed always remember her this way. And I think voters will too. “You have grown so much. I really think that you could be the next country/pop/soul/whatever superstar. When you were up there just now, there was something so magical about it. You know the show is called The Voice, and I feel like you are that, in a way. Your voice has truth and grit, and your tone is so beautiful. It was amazing. I love you,” Camila gushed proudly.

So now, it is prediction time. Who will be the final five? On Tuesday, the top four voter-getters will automatically advance, and I think they will be Morgan, Bodie, Bryce, and probably/hopefully Kim. That’ll leave the remaining four singers to compete in one last Instant Save sing-off, and I imagine either Justin or Omar will slay the competition and snag the fifth spot. But don’t rule out heartthrob Brayden’s teenybopper fanbase — unless all those old men get up out of their EZ-chairs and vote, Brayden could take a spot from a more powerful singer. Tune in Tuesday and find out.