The dentist will see you… in three years: Some NHS patients are being forced to wait until 2024 for an appointment with some so desperate they are pulling out their own teeth, report warns

Dental patients are being forced to wait until up to 2024 for NHS appointments, a damning report reveals today.

Laying bare the extent of the crisis, watchdogs said many were turning to private care or even pulling out their own teeth and doing DIY fillings.

A number of surgeries have thousands on their waiting lists and others have closed their books to new patients.

But some of the same practices will offer an appointment within a week to those who can afford to pay privately, according to research by Healthwatch England. 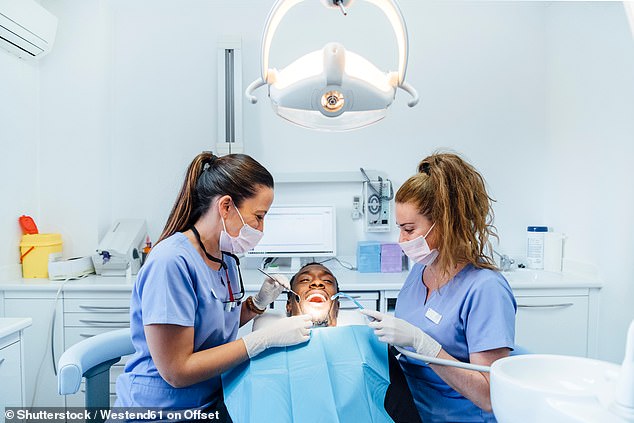 Dental patients are being forced to wait until up to 2024 for NHS appointments, a damning report reveals today (stock image)

Pensioner Gwen Leeming accused dentists of discriminating against NHS patients after struggling for six months to get an appointment.

The retired administrator, pictured, suffered for two years with infections in two of her back teeth but when she sought help she was told her NHS practice was currently only treating private patients. She hunted for an NHS dentist for months and finally found one an hour’s drive from her home.

The 72-year-old, from Brighton, is now calling on the Government to fix the ‘broken dental care system’. She added: ‘For me historically there still seems to be a level of bias and discrimination against NHS patients.’ 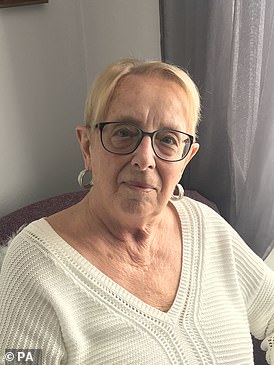 Gwen Leeming had to wait six months for treatment

It found that one in three patients have felt pressured into paying for private care because of unbearable pain. Others say they have been driven into debt to meet dentistry bills.

Those who are unable to go private can be left waiting for up to three years to be seen, the report finds. Even emergency care entails waits of up to six weeks.

The delays can lead to ‘worsening of their dental problems and losing their teeth’, the report says. Healthwatch England claims public opinion of NHS dentistry has never been lower and highlights a ‘twin crisis’ of lack of access and affordability.

The number of dental surgeries offering NHS treatment fell from 9,661 in 2014/15 to 8,408 in 2019/20. The British Dental Association said dentistry was the only part of the NHS operating on a lower budget than a decade ago.

Spokesman Shawn Charlwood said: ‘For too long meaningful reform of NHS dentistry has been repeatedly kicked down the road. Covid has pushed a system already in crisis to breaking point, with millions left with no options.

‘Patients need to know that by this time next year ministers will have turned the page on a decade of failed contracts and underfunding.

‘While it should be shocking that some are waiting weeks, months or even years to access care, that was business as usual before this pandemic struck.

‘This isn’t just the result of lockdown but years of treating NHS dentistry as the Cinderella Service.’

The Healthwatch England report highlights the case of a patient who needed hospital treatment after they overdosed on the painkillers they were taking to ease their dental problems.

Others have been told to use DIY filling kits or have been prescribed antibiotics with no prospect of a follow-up appointment to treat the underlying problem.

Some who called NHS 111 seeking emergency care were told to ‘use salt water’ and carry on calling dental practices until they could find help. Waiting times just to get through to a surgery can be over an hour.

Other patients say they have been removed from their practice list for not making regular enough appointments and found out only when they tried to book. ‘Access to NHS dentistry remained a key issue for people across England between January and March 2021,’ the report said. 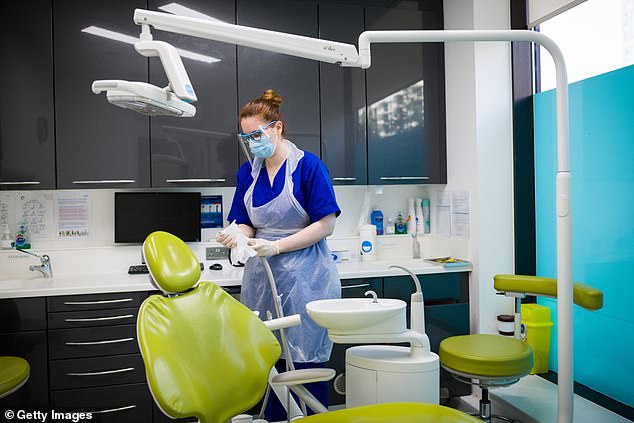 Laying bare the extent of the crisis, watchdogs said many were turning to private care or even pulling out their own teeth and doing DIY fillings. Pictured: A dental nurse disinfects a surgery room in London in May 2020

Cancer patient Janet Walsh, 80, has spent months in pain because she cannot find a dentist taking on NHS patients.

She broke a tooth in November, leaving the lower plate of her dentures rubbing against her gums. Five months later the Leeds pensioner, pictured right, who is undergoing chemotherapy for ovarian cancer, was still unable to find an NHS dentist.

If she goes private, it will cost as much as £1,335. ‘I’m too exhausted to go chasing up dentists,’ she told Leeds Live. 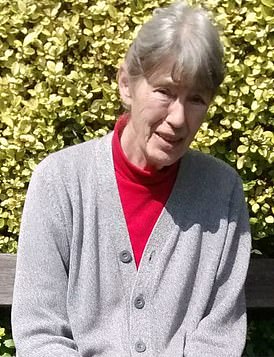 Four in five of those who contacted the organisation in the first three months of the year said they had struggled to access care quickly enough. And the number of complaints it received about dentistry was up 22 per cent on last year.

Imelda Redmond, national director of Healthwatch England, said: ‘The twin crisis of access and affordability hitting NHS dentistry means many people are not able to access timely care – and the poorest are hardest hit.

‘Reform of dental contracts needs to be a matter of urgency. New arrangements should include making access to NHS dental services equal and affordable for everyone, regardless of where people live, their income and ethnicity.

‘Failing to act now will result in long-term harm for thousands of people, putting even greater pressure on the already overstretched healthcare system.’

Even when patients can get access to NHS dental services, 61 per cent say it is too expensive, with fees ranging from £23.80 to £282.80 depending on the treatment.

Private treatment can cost hundreds or even thousands of pounds more.

One in four said they either struggled to pay or avoided dental treatment because of the costs, according to a separate poll for the watchdog.

Nearly a third had to pay private fees to receive all the treatment they needed.

The Department of Health last night insisted it was committed to supporting dentists so ‘everyone across the country can access affordable, high-quality dental care’.

It said all practices had been able to deliver their full range of services since last June and it supported the ‘most vulnerable’ with free treatment.

‘Some people were being asked to wait up to three years to get an NHS appointment. However, private appointments are available within a week. People have borrowed money to pay for private treatments as a last resort.’