Lonely life of tycoon father who Liz Hurley’s boy ‘never met’: Steve Bing, who plunged to his death aged 55, was dubbed ‘Bing Laden’ after denying he was Damian’s dad – one of TWO love children he sired. So did regrets overwhelm him?

Multi-millionaire film-maker Steve Bing had to take a DNA test before he would admit he had fathered a child with Liz Hurley, and he spent a lifetime keeping the many women in his life at arm’s length.

Tragically, it appears to have been his loneliness in lockdown that proved too much for him, leading him to plunge to his death from the 27th floor of his Los Angeles apartment block on Monday.

As friends said that Bing had suffered from depression and had struggled to cope with the lack of human contact in recent months, Hurley revealed yesterday that Bing had recently got in touch with her after years of silence. 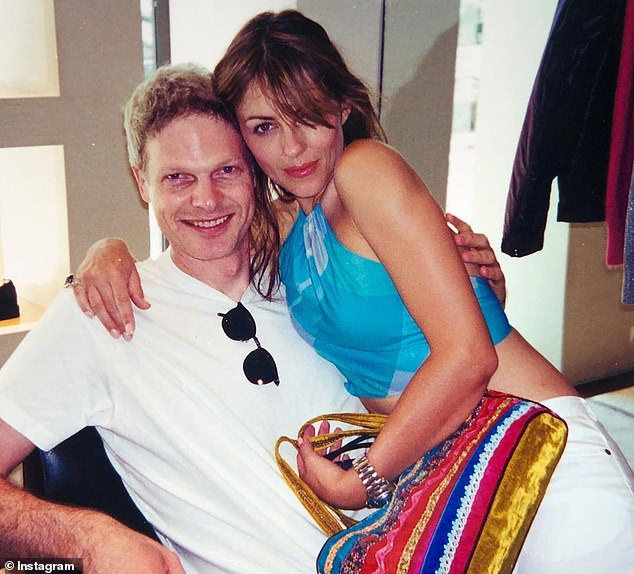 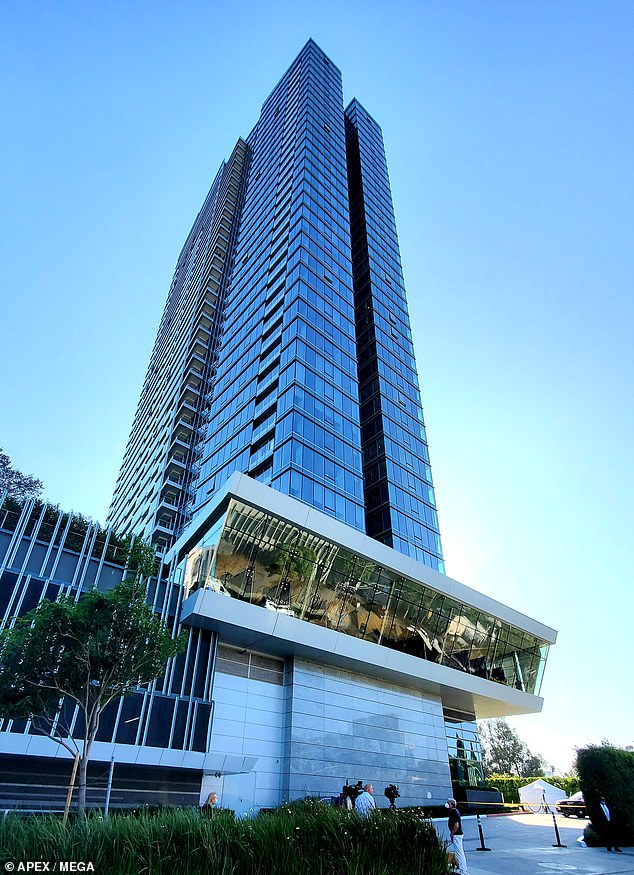 With reports claiming that he was suffering with depression, Bing plunged to his death from the 27th floor of his Los Angeles apartment block (pictured) on Monday

Sharing hitherto unseen photos of them together in happier times on social media, Hurley said she was ‘saddened beyond belief’ at his ‘terrible end’.

Police have suggested that the 55-year-old jumped from the super-smart Ten Thousand building just after 1pm on Monday.

The 6 ft 4 in playboy bachelor, who inherited a $600 million (£480 million) family fortune from his New York property developer grandfather, at one time counted Warren Beatty, Mick Jagger and Playboy founder Hugh Hefner among his friends.

He was a generous donor to environmental causes and had some success in Hollywood, backing the Tom Hanks animated film The Polar Express, Beowulf (starring Ray Winstone) and the Rolling Stones concert movie Shine A Light.

However, his philanthropy and film work were overshadowed by a scandalous private life, including two high-profile paternity cases.

In the first, some 18 years ago, Bing disputed Hurley’s claim that he had fathered her son Damian — reportedly at Elton John’s villa in the South of France.

(Hurley had recently emerged from a 13-year relationship with Hugh Grant when she embarked on the romance.)

In 2002, meanwhile, Bing sued billionaire Kirk Kerkorian, 84, for invasion of privacy after the latter hired private detectives to go through his rubbish, removing a piece of dental floss. DNA on this floss was later used to prove that Bing had fathered a child with Kerkorian’s wife Lisa Bonder.

A man who shunned romantic commitment and lived alone, Bing had also fallen out with his own family by the time he died, accusing them of trying to write both Damian and Kira (his daughter with Bonder) out of the family fortune on the grounds that the children were born out of wedlock and never really lived with him.

However, given that he had already pledged to donate most of his estimated remaining $590 million (£470 million) fortune to charity, sadness over his death is unlikely to be compounded by a battle over his money.

This week, Hurley wrote on Instagram: ‘Our time together was very happy and although we went through some tough times, it’s the good, wonderful memories of a sweet, kind man that matter.’ 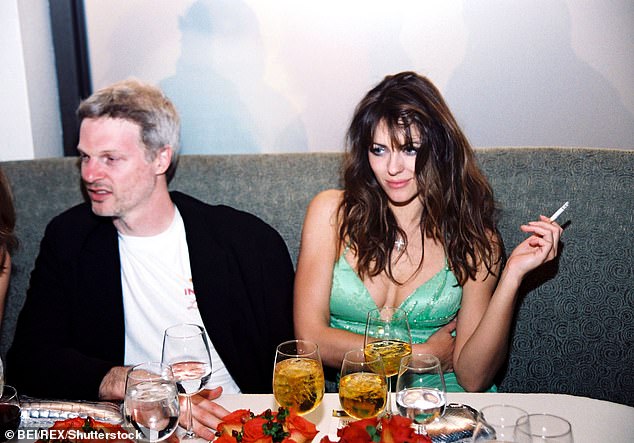 She said they had ‘become close again’ in the past year and that they last spoke on Damian’s 18th birthday in April. In 2018, court papers claimed the boy had never even met his father.

Damian himself said on the loss of his father: ‘Thank you from the bottom of my heart to everyone that has reached out following the devastating news. This is a very strange and confusing time and I’m immensely grateful to be surrounded by my phenomenal family and friends.’

Bill Clinton, who received generous political donations from Bing, also paid tribute, saying: ‘I loved Steve Bing very much. He had a big heart and he was willing to do anything he could for the people and the causes he believed in. I will miss him and his enthusiasm more than I can say, and I hope he has finally found peace.’

Bing, who spent years living in an expensive hotel, made his final home in arguably LA’s swankiest apartment building, a 40-floor residence on the edge of Beverly Hills where the rent starts at $65,000 (£52,000) a month.

He came into his fortune — courtesy of grandfather Leo’s New York skyscraper empire — on his 18th birthday, promptly dropping out of Stanford University to try to make a career in Hollywood. 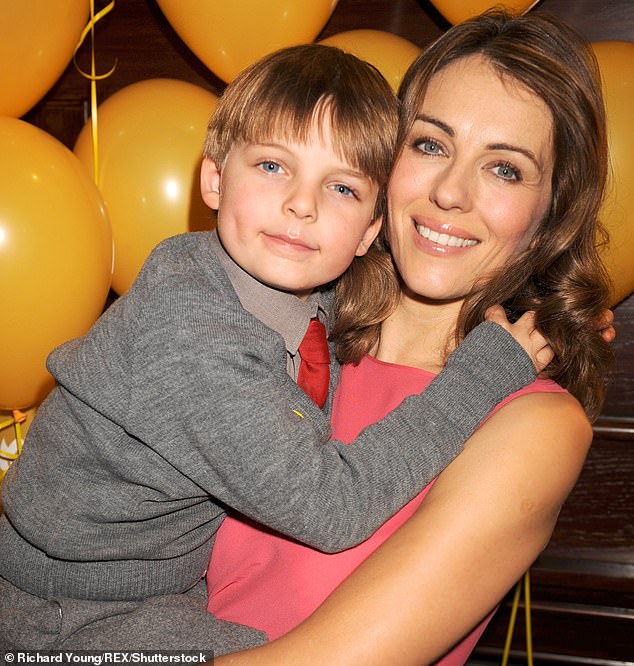 However, his deep wallet and charm won him famous friends in the film world including the actor James Caan, who became a father figure.

His generosity to Democrat causes introduced him to another set of prominent pals: he and Clinton were friends of Jeffrey Epstein, the late paedophile financier and friend of Prince Andrew.

The secretive Bing — who repeatedly resorted to legal action to protect his privacy — was sometimes compared to the enigmatic protagonist of F. Scott Fitzgerald’s novel The Great Gatsby.

Acutely sensitive about his wealth, he preferred to donate from the shadows.

He liked to dress in ripped jeans and ragged T-shirts, once surprising a political fundraiser who mistook him for a gardener. Instead, Bing pulled a crumpled blank cheque out of his back pocket and filled it out for $1 million before handing it over.

His sexual appetites, however, were very much in line with Hollywood tradition. Once described as ‘a man dedicated apparently in equal measures to philanthropy, politics and women’, Bing — a ‘high roller’ in Las Vegas — patronised strip clubs where he showered the girls with $100 bills.

He had a reputation as a prodigious womaniser whose girlfriends included Playboy Playmates, model Naomi Campbell and film stars including Uma Thurman, Sharon Stone and Farrah Fawcett.

When he wasn’t spending time with actresses, he liked to hang out with members of the LA ‘bratpack’ at Hugh Hefner’s Playboy mansion, scene of some of the worst debauchery in Tinseltown.

‘He’s an equal-opportunity employer,’ a friend once quipped. ‘Girls are all over him.’

However, Bing was a determined bachelor. He moved into the Hotel Bel-Air one night in the early 1990s and stayed there for nine years.

Friends believed his hotel living spoke volumes for his attitude to life, and particularly his romantic attachments.

‘There’s nothing more spectacularly non-committal than living in a hotel,’ said one.

Bing later bought a small two-bedroom home in Bel Air but subsequently bought the adjoining seven houses so he could knock them down and build a palatial, private compound.

Yet it was his relationship with Liz Hurley that finally dragged him into the limelight. He was 35 and doing well in Hollywood when he met her.

He famously loved to spoil women, and wooed 35-year-old Hurley with private jets, a solid-gold Rolex, sapphire and diamond rings and all-expenses-paid trips to New York and Europe.

They split briefly in March 2001 but resumed the relationship to spend time together at his suite at the Hotel Bel-Air, and they holidayed at Elton John’s villa in Nice that August — where Damian is reported to have been conceived.

But instead of uniting them, the baby news sparked one of Hollywood’s most bitter paternity feuds. While friends attested to his enormous generosity and refreshing lack of pretension, he was dubbed a ‘love rat’ over his unchivalrous behaviour.

Having paid Liz’s six-figure legal bill when she was sued by the Screen Actors Guild for strike-breaking, Bing was less generous when she revealed in 2001 that she was pregnant with his child.

He issued a press release saying they hadn’t been in an exclusive relationship and that it was ‘her choice to be a single mother’.

Bing family sources insisted he had asked Hurley to have a termination but she refused, later rejecting his request that they attend counselling together to discuss how to proceed.

Although Bing initially denied he was the biological father, Hurley vehemently denied that it could have been any other man.

The result of the court-ordered DNA test was final. After he was forced to admit he was Damian’s father, Bing said he would pay £100,000 a year into a trust for the boy. 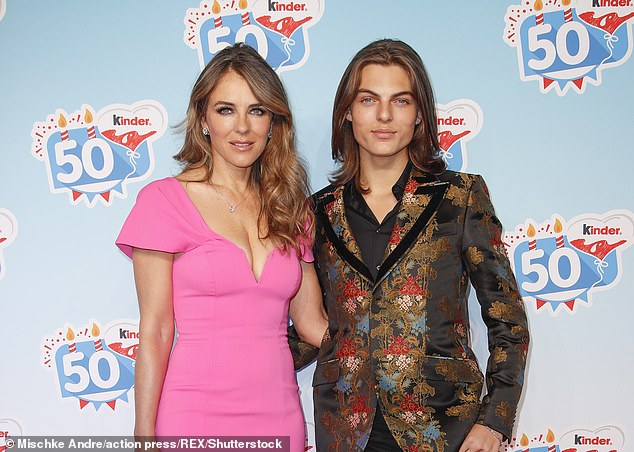 But Hurley rejected the offer. She had learnt that Bing had been having a simultaneous affair with Brenda Swanson, an Armani model, and was infuriated after Bing’s sister Mary claimed Hurley ‘snookered’ him into becoming a parent.

He did even more to earn his ugly nickname of ‘The Sperminator’ when he was at the centre of another bombshell paternity case in 2002.

Bing sued MGM Studios boss Kirk Kerkorian for $1 billion, claiming he had breached his privacy by hiring a private detective to rummage through his dustbins and find the crucial dental floss.

This proved that Bing had sired a daughter, Kira, by Kerkorian’s wife, the former tennis player Lisa Bonder.

Ms Bonder had been married to Kerkorian — who at 84 was 48 years her senior — for just 28 days in 1999, later reuniting for a one-week fling during which she said she became pregnant.

Although Bing was reportedly upset at being dubbed ‘Bing Laden’ over his treatment of Hurley and refused to speak to her for years afterwards, he did join forces with her to fight off a bid by his 84-year-old father, Peter, to write Damian out of the family fortune.

Peter, a doctor, claimed Damian was not entitled to inherit money as he had been born out of wedlock and brought up by Hurley rather than Bing. Peter also claimed in court documents that Damian had never even laid eyes on his biological father.

In July 2019, an LA judge agreed and ruled that Peter had ‘unreasonably distorted’ the meaning of grandchild.

The court ordered that both Damian and Kira will have access to a trust fund — reportedly worth more than £380 million.

A complicated man who realised that immense wealth was both a blessing and a curse, Steve Bing spent his life both revelling in his money and trying to escape the problems it caused him.