If Sweden is so wrong to keep pubs open why is its health chief’s face the tattoo everyone wants? ASKS IAN GALLAGHER

Down at the Tudor Arms last week, regulars toasted their good fortune, happy to be in one of the last pubs on Earth still open.

There were endless pints of Guinness and London Pride bitter, while rules about not standing at the bar and ensuring a 5ft distance between tables were scrupulously observed.

Unsurprisingly, Covid-19 monopolised conversation, but it was a convivial evening nonetheless. Wobbling slightly, an elderly customer sauntered off at closing time with a tune on his lips. 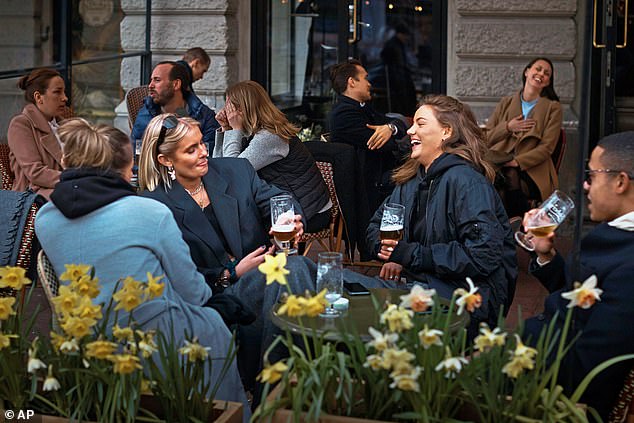 People are pictured having a drink outside a bar in Stockholm. It is a strategy aimed at allowing some exposure to the disease to build immunity among the general population, while protecting the vulnerable and ensuring hospitals are not overwhelmed

Those minded to dial a shop- a-neighbour hotline should rest easy, for this Tudor Arms is not in the UK, but is a British-themed pub in Stockholm. In Sweden, the rules are different. It refuses to join the rest of the world in harsh quarantine.

Children are still in school, bars and restaurants are open, as are garden centres and shops; crowds of up to 50 are allowed, and no one is chastised for sunbathing, sitting on park benches or daring to flee to countryside boltholes.

It is a strategy aimed at allowing some exposure to the disease to build immunity among the general population, while protecting the vulnerable and ensuring hospitals are not overwhelmed.

But the country’s light touch has incurred criticism. Sweden has a reputation as a ‘moral superpower’ and commentators seize upon any death-toll spike as evidence of a foolhardy gamble that risks lives for the sake of the economy.

Sweden considers the big picture, though, and argues that part of its policy is aimed at preventing an economic crash, as mass unemployment will have dire health consequences. For example, after the 2009 debt crisis, suicides in Greece increased by up to 40 per cent. 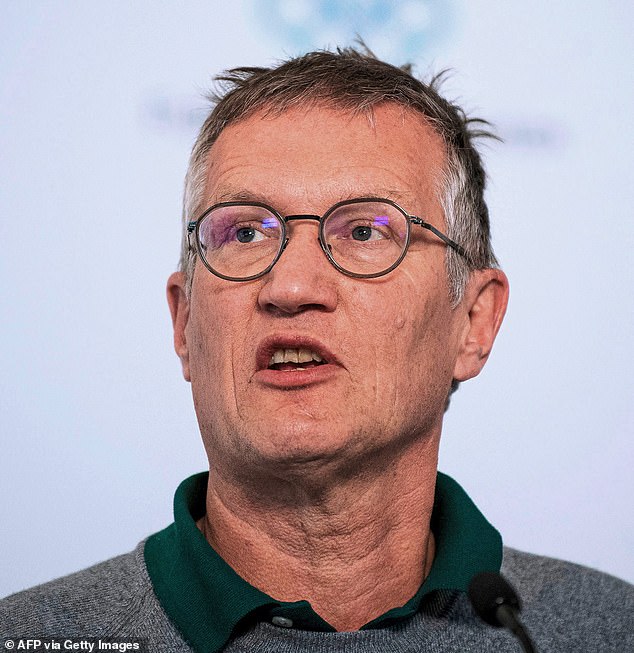 But many Swedes feel as if outsiders enduring lockdown are willing them to fail. ‘It makes you defensive,’ says Anglo-Swede Alex McBeath, who works at the Tudor Arms. ‘I’m cautiously optimistic about the future. I support the way we have approached the crisis.’

So does the majority of the country. Anders Tegnell, 63, state epidemiologist with the Public Health Agency of Sweden and the architect of its Covid-19 response, fronts daily press conferences. Inevitably, he receives online vitriol.

Yet he is so popular that some in Stockholm have had his face inked on to their arms and legs. Tattooist Zashay Tastas, who designed the image, says: ‘Tegnell has become the face of Sweden’s approach. This is the first time a real nerd is being idolised.’

Or as Dr Tegnell himself puts it: ‘It is the first time in history that an epidemiologist has been considered famous.’ He modestly notes, however, that he is just one of 15 experts meeting daily to analyse data and make recommendations.

But have Dr Tegnell and his colleagues got it wrong? Is managing coronavirus impossible without a lockdown?

Sweden has recorded 2,192 deaths, more than twice as many as neighbouring Denmark, but it has almost twice the population, at ten million. In Britain, the toll has topped 20,000. So far Sweden has defied forecasts saying that, unless it changed course, it would suffer 50,000 to 180,000 deaths. 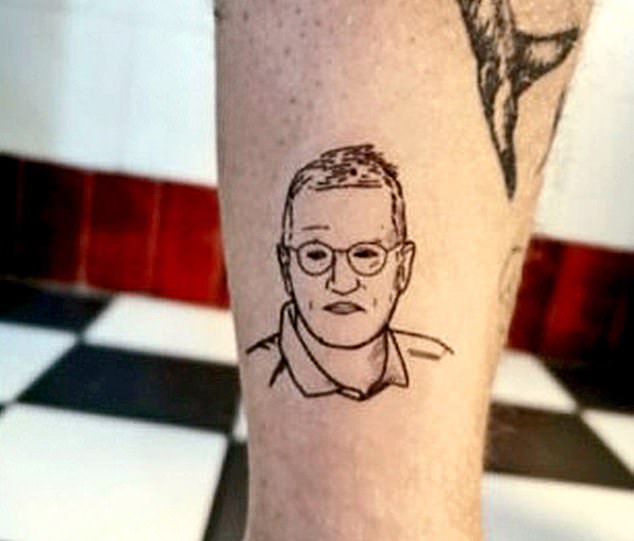 Yet he is so popular that some in Stockholm have had his face inked on to their arms and legs. Tattooist Zashay Tastas, who designed the image, says: ‘Tegnell has become the face of Sweden’s approach. This is the first time a real nerd is being idolised’

Arne Elofsson, a biologist at Stockholm University, initially estimated that the nation’s health system would be quickly swamped, but now concedes: ‘It appears the epidemic is plateauing and that the catastrophic scenarios predicted by some will never appear in Sweden.’

Dr Tegnell is cautious by nature but declares himself ‘satisfied’ the strategy appears to be working, even if there are some things he would have done differently, especially in care homes.

Nationally, the number of new cases rose sharply last week – due mainly to increased testing – and stands at 18,177. Most are in Stockholm and its suburbs, with very small numbers in the thinly populated areas elsewhere.

Every country, one way or another, has to reach herd immunity so the chains of transmission break, says Dr Tegnell. He believes Stockholm could do so in weeks – but acknowledges he doesn’t have all the answers as so much about the virus is still unknown.

In a way, the story of Sweden’s response to the crisis begins in Britain. Dr Tegnell studied in London and his team’s approach is based on models developed here.

In mid-March, both Dr Tegnell and Bjorn Eriksson, Stockholm’s director of health, believed Britain and Sweden ‘were on the same page’. On March 12, ITV political editor Robert Peston wrote about Government thinking, saying ‘herd immunity’ was the key phrase and warning against shutting schools.

But a fortnight later the UK abruptly changed tactics and imposed a draconian lockdown, having been unnerved by a study suggesting that without it, up to 250,000 people might die.

Today the Cabinet is divided between ‘doves’ such as Health Secretary Matt Hancock, cautious about easing restrictions, and ‘hawks’ led by Chancellor Rishi Sunak who want a quick end to lockdown.

Sweden stayed the course, based on the understanding that the disease can only be managed not eradicated. Social distancing and working from home were suggested, not ordered, as the elderly were encouraged to stay at home.

Stockholm’s mayor, Anna Konig Jerlmyr, told us: ‘We trust our citizens and treat them with respect. In return we expect them to take responsibility and I’m proud that the majority have done so. In other European cities I was saddened to hear how the police watch people and enforce rules. That is not our way. Also we are as transparent as possible. It is important to share information and all the figures.’

Anna Erdunbelau, a 46-year-old shopping in Stockholm last week, agrees. ‘We are generally a sensible people who usually do the right thing. We are treated like adults. And you have to understand this is all built on trust.’ 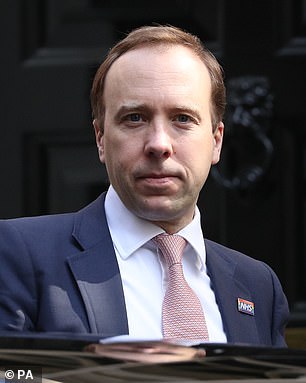 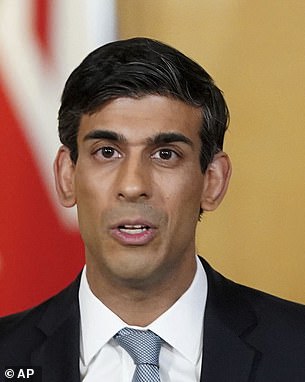 Today the Cabinet is divided between ‘doves’ such as Health Secretary Matt Hancock, cautious about easing restrictions, and ‘hawks’ led by Chancellor Rishi Sunak who want a quick end to lockdown

Key to this is the independence of public bodies such as Dr Tegnell’s Public Health Agency. It ensures decisions are based on expertise, prevents ministers meddling and explains why it is Dr Tegnell leading press conferences while politicians take a back seat.

Politicians didn’t try to block his suggestion that schools remain open, a decision partly taken because younger children are not a major cause of the transmission, and partly so health workers don’t need to stay home to look after their children. ‘We need every healthcare worker we can get,’ says Mr Eriksson.

At the moment, hospitals are coping. Sweden had an enviable health care system in place before the outbreak, which has helped. And it hasn’t been beset by quite the same PPE shortages seen in the UK.

‘We think we are at a peak of infections in Stockholm and we are not at full capacity in hospitals, so I’m pleased,’ adds Mr Eriksson. ‘But we must not be complacent. The weather is getting warmer, more people will be outside and they will need to be disciplined about social distancing.’

Ministers have warned that bars and restaurants that failed to follow guidelines would be closed. But all around the city, people go about their business, shopping, cycling, watching the world go by while drinking outside bars and cafes.

‘It sometimes seems as if coronavirus doesn’t exist,’ says Andreas Hatzigeorgiou from Stockholm’s chamber of commerce. ‘Things are moving normally. People do observe social distancing – though we did it before Covid-19, it is in our DNA!’

He knows Sweden’s economy will suffer – it is doing so already – but believes it stands a chance of avoiding the kind of crash predicted elsewhere. Consumer spending is down 27 per cent, but’s that compared to 66 per cent in Denmark.

For now, Dr Tegnell expects doubters to keep sniping. But if his colleagues sense it’s getting to him, they remind him of pioneers whose ideas were not always accepted at the time. Such as Ignaz Semmelweis, the Hungarian ridiculed for thinking that washing hands helped prevent the spread of disease.