Scientists will use genomic sequencing for the first time to track fast-moving syphilis outbreaks infiltrating Melbourne’s outer suburbs, as doctors warn immediate intervention is needed to contain an evolving epidemic of the sexually transmitted disease.

Doctors at the Royal Victorian Eye and Ear Hospital are also reporting a 20-fold increase in people presenting with syphilis-related eye infections. 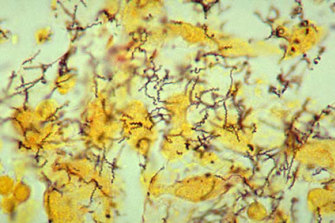 There has been a rise in syphilis cases in Victoria.

A rising number of Victorians are also being admitted to the hospital with delayed diagnosis of ocular syphilis and some are being left with permanent vision loss.

Worrying clusters of the disease are spreading unchecked in Melbourne’s outer western and south-eastern suburbs, with hotspots emerging in the local government areas of Brimbank, Melton and Casey.

There were 56 cases of syphilis recorded in Brimbank last year, while 42 were detected in Casey, up from 27 cases in 2019, and 46 cases reported in Melton.

Researchers say the potentially fatal disease, which previously only circulated among men who had sex with other men, is infecting women at an alarming rate.

An analysis by Alfred Health’s Melbourne Sexual Health Centre found there had been a 220 per cent spike in syphilis infections among females in recent years.

Scientists and sexual health physicians studying the epidemic are now applying the lessons learned about containing coronavirus to the sexually transmitted disease – which first appeared in the 15th century – and shut down outbreaks before they take off.

“It’s an ancient disease, but the way we have diagnosed and treated it hasn’t really changed for many, many years,” Professor Williamson said. “We think applying these cutting-edge technologies that we have used for coronavirus will be quite transformative for this disease, which has long plagued humankind.”

In the early 2000s, doctors at the Royal Victorian Eye and Ear Hospital recorded only about one case of ocular syphilis a year.

However, since 2018, doctors have reported seeing more than 20 cases annually and some weeks they are admitting up to five patients with ocular syphilis into hospital a week. The treatment consists of penicillin given intravenously for two weeks.

“Ocular syphilis can affect the eyes in many different ways and some of the vision loss can be profound,” ophthalmologist Danielle Ong said.

“It can happen rapidly or it can happen insidiously. It’s more often the case that people are walking in off the street with blurry vision or floaters in their eyes only to find out the real culprit is syphilis.”

Dr Ong said many patients were not aware they were at risk of syphilis and often did not know that the disease could spread to their eyes and cause permanent blindness.

Dr Ong, who worked with a team of doctors at the Royal Victorian Eye and Ear Hospital researching the condition from 2006 to 2019, said that in 2018 the hospital recorded 17 cases of ocular syphilis, while in 2019 there were 21 patients diagnosed with the condition, seven of whom were women.

“There is no indication that cases are slowing down,” she said.

“It is heartbreaking because if people get diagnosed and treatment early they can prevent permanent vision loss,” she said.

The surge in cases among women has also had tragic consequences and led to babies being infected with the disease in the plancenta and dying for the first time in Victoria in 14 years.

Four Victorian babies have died from congenital syphilis in the past three years. Two babies died last year, and one in 2019 was stillborn after contracting syphilis from their mother. Another, in 2018, died in the womb after contracting the disease.

Up to 40 per cent of infants with syphilis are stillborn and other manifestations after birth if left untreated include failure to thrive, enlarged liver or spleen, deformities and deafness.

Syphilis begins with an appearance of sores or ulcers, before developing into a rash. If untreated, it can eventually cause a brain infection, dementia and blindness. It can be cured with penicillin, but people may not seek treatment because they do not realise they have been infected, as syphilis is often asymptomatic following signs of the initial infection.

Researchers studying the resurgence of syphilis suggest casual sex through online dating, reduced fear of HIV, globalisation, increased international travel, and a lack of screening are all likely to be contributing factors.

Doctors also suspect lower-socio economic communities in Melbourne’s outer suburbs are at heightened risk due to barriers in accessing healthcare.

Professor Williamson said using genomic data to track syphilis will allow researchers to understand why it is spreading and how it is taking off. The technology works by analysing a virus or bacteria sample taken from a diagnosed patient, mapping out its entire genetic code and then comparing it with other cases to determine if there is a link.

“It may be that there are networks where there is a particularly high incidence of syphilis, we’ve seen that before with gonorrhea, where there’s spillover into other populations,” Professor Williamson said.

Prior to COVID-19, genomic sequencing has been used in Australia to trace the source of outbreaks of food-borne bacteria and hospital infections.

Professor Marcus Chen, from the Melbourne Sexual Health Centre, said cases of the dangerous sexually transmitted infection have almost tripled in Victoria since 2014, after being all but eradicated in the early 2000s.

He warned that the rates of the diesease, which can be diagnosed through a simple blood test, were likely far higher than what was being reported as not enough heterosexual testing is being undertaken. 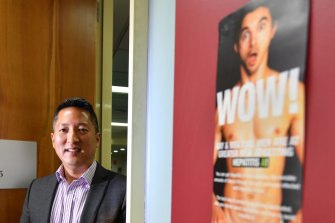 “If this isn’t reversed right now we are going to see more of the same happening,” Professor Chen said. “These are tragic and avoidable events. It’s extremely disappointing because we know syphilis can be controlled, we’ve got the tools to do it, and it is a highly treatable condition.”

He said the re-emergence of syphilis among heterosexuals residing in outer metropolitan Melbourne highlighted the need for further screening, particularly among women of reproductive age.

“When you see cases of congenital syphilis that’s really a sign that public health controls have broken down because it is so preventable,” he said.

Earlier this year Alfred Health launched the Victorian Sexual Health Network – a network of bulk-billed GP
sexual health clinics aimed at reducing the tyranny of distance and improving access to screening for people in
the outer areas of Melbourne.