Home » World News » The show WILL go on – but only for Lloyd Webber: Test event planned

The show WILL go on – but only for Lloyd Webber: Test event planned

The show WILL go on – but only for Andrew Lloyd Webber: Ministers plan test event for impresario’s Cinderella production in July after he threatened legal action over closures – but other theatres slam ‘galling’ decision which leaves them out

Andrew Lloyd Webber’s Cinderella could be held in front of large crowds as ministers look to run test events before Freedom Day.

But the composer and impresario, who has threatened to admit big audiences regardless of restrictions, said he will only take part if it is industry-wide.

The government plans to have up to 20 pilot schemes at outdoor festivals and theatre shows before restrictions are eased on July 19.

It comes after theatre impresario Sir Howard Panter lambasted the ‘disproportionate’ response to the pandemic, accusing politicians of ‘twisting figures’.

Sir Howard, 72, said the industry has been left ‘devastated’ after Boris Johnson announced the end of lockdown would be delayed for another four weeks. 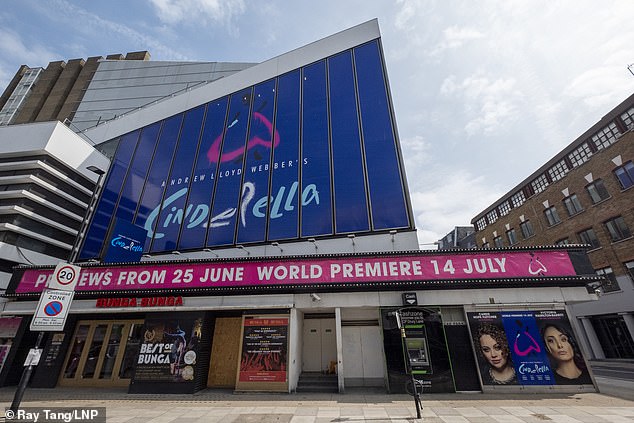 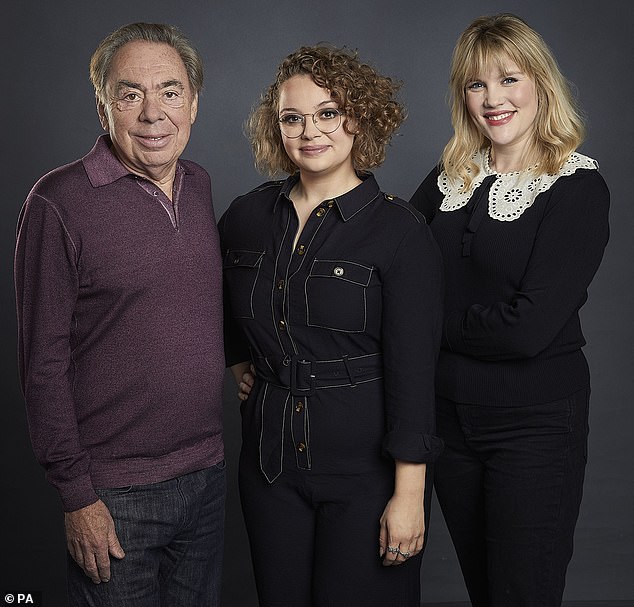 The composer and impresario (left, with Carrie-Hope Fletcher and Emerald Fennell), who has threatened to admit big audiences regardless of restrictions, said he will only take part if it is industry-wide

Meanwhile Baron Lloyd Webber threatened to admit full crowds into his venues despite the rules.

He held talks with Culture Secretary Oliver Dowden after suggesting the government arrest him.

The 73-year-old said his production of Cinderella would only be part of a pilot test event if was opened up to the wider industry.

He told the Times: ‘Oliver Dowden suggested the possible idea of pilot events at the end of last week.

‘I have made it very clear that I will not take part in any pilot scheme unless it is representative of theatre and live music as a whole.

‘However, if that is the case and the health people are insisting that they really need more pilots before they let us all re-open, I’ll take part, but I reiterate I absolutely will not unless I am assured that Cinderella is part of a much wider scheme.’

Anyone wanting to get to the test events ahead of the July 19 reopening have to have been fully vaccinated or had a negative Covid test.

Download music festival will go ahead in Leicestershire at the weekend with 10,000 people.

Euro 2020 matches and the British Grand Prix are also being held with large crowds as part of the scheme.

The final of the tennis championships at Wimbledon will be held on Centre Court with 15,000 people there. 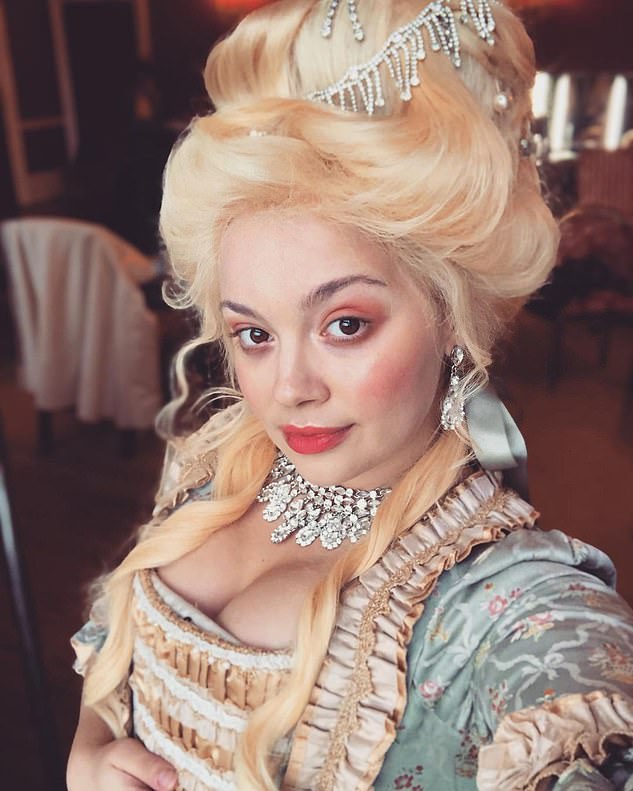 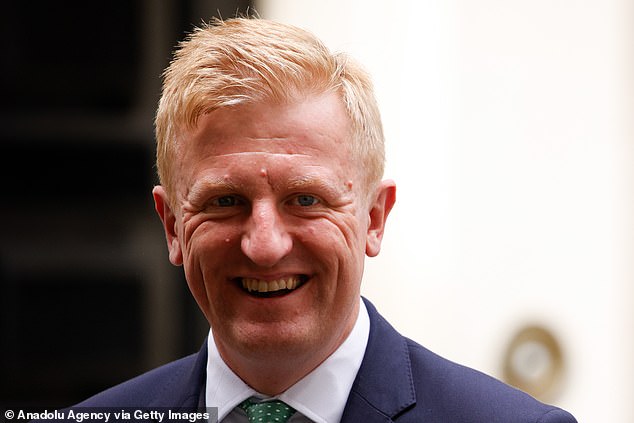 He said the industry has been left ‘devastated’ after the PM announced the end of lockdown would be delayed for another four weeks.

Theatres will have to continue to operate largely under the current cap of 50 per cent capacity until July 19, while others will remain closed as it is not financially viable for them to open with reduced numbers.

He told BBC Breakfast: ‘The reaction of the Government is completely disproportionate to the facts. I’ve been affected by Covid and I do understand.

‘There were three deaths yesterday – three too many no doubt, dreadful – but there are thousands and thousands of people’s jobs and businesses which are at risk and many of those businesses will not now come back after 15 months off.’

Sir Howard, who founded the Ambassador Theatre Group (ATG) and is co-founder of theatre operator Trafalgar Entertainment, could now face costly delays to his upcoming shows including Jersey Boys which was originally scheduled to open in spring at the newly renovated Trafalgar Theatre.

‘There has to be some real statesman-like judgement about what is more important.

‘There is no certainty. It’s disproportionate. It’s just kicking the can a little bit further down the road and just hoping it will be fine.’

He added: ‘The facts about hospitalisation and deaths, as important as they are, they’re minuscule in numerical terms.

‘They’re twisting the numbers saying ‘oh it’s 62 per cent up’. It’s like 62 per cent up from 30 to 60 or something. The numbers are tiny in the population at the moment.’ 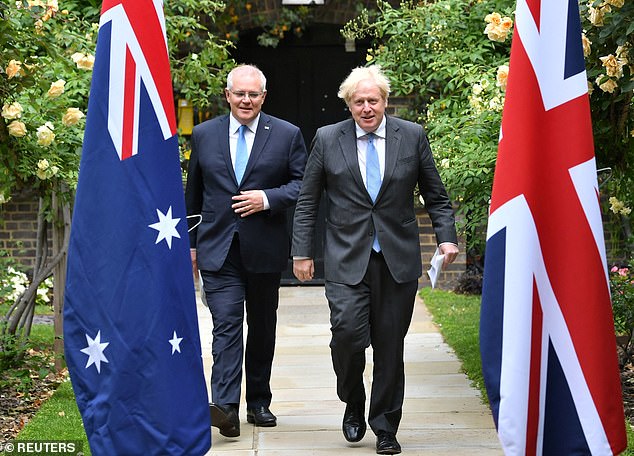 Meanwhile Sir Howard Panter, 72, said the industry has been left ‘devastated’ after Boris Johnson (pictured with Australian PM Scott Morrison yesterday) announced the end of lockdown would be delayed for another four weeks

The Prime Minister dealt a catastrophic blow to theatre and live events during his press conference on Monday.

He said he hoped up to 20 pilot events, including Lord Andrew Lloyd Webber’s Cinderella, will go ahead in the next four weeks.

But Sir Howard said he has ‘not been told. Our trade association has not been told’ of any such events.

CEO of the Royal Albert Hall Craig Hassall also said it was ‘galling’ the pilot events are those which are most popular as he revealed he has been left ‘very, very deflated’.

He told Times Radio: ‘We have offered the Hall to the government several times without any interest from their side so I could offer again, but they don’t seem very interested in using the Royal Albert Hall.

‘A cynical person would say ”isn’t it funny that the test events being mooted now are the Wimbledon Grand Final, a car race and probably the Cinderella production by Lloyd Webber?”.

‘We’ve done so many test events… Concert halls are very, very safe spaces.. I wish the Government would believe us.

‘I’m getting very cynical and bitter and twisted about the whole thing I have to say.’

Mr Hassall said the curbs at Christmas already cost them hundreds of thousands of pounds and that they have spent millions installing a new ventilation system.

‘The current act by the government gives people pause and they may think ”is it safe to go back?”.

‘They are not helping by suggesting venues and concert halls aren’t safe. And of course, they are.’

The new setback came as ministers refused to publish the results of a study understood to have concluded it would be safe to reopen theatres.

Webber said the report had been ‘buried’.