Home » World News » There's a State Park Named After Trump, and It's Past Time to Rename It

There's a State Park Named After Trump, and It's Past Time to Rename It 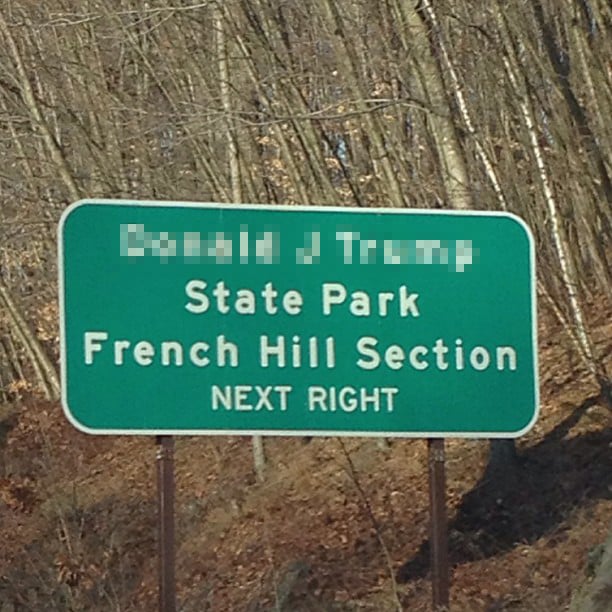 In Birmingham, AL, demonstrators took down a statue of Confederate captain Charles Linn. A Christopher Columbus statue was beheaded and removed in Boston. In England, a statue of a 17th-century slave trader was thrown into Bristol Harbor. All around the world, statues have been crumbling (cue Sugar Ray’s “Fly”). Why? Because they represent legacies of racism, oppression, and violence. And it’s not just statues of problematic white guys that are being reconsidered; buildings, landmarks, and parks are, too. The University of Oregon has announced it will rename a building named after racist legislator Matthew Deady, a slew of geologic features in Colorado are on the renaming block (including the disturbingly named Chinaman Gulch), and the citizens of Nevada are trying to rename a neighborhood park named after a former US senator who believed racial diversity was harmful to society (wrong, you were). If you’re in this fight to dismantle white supremacy, then removing them is a no-brainer. However, it seems we’ve missed a big one: New York has a state park named after Donald J. Trump.

“We should not be subjected to look at monuments and tributes of our oppressors,” Black Lives Matter Greater NY Chairman Hawk Newsome told POPSUGAR. “These people fought to keep us in chains and committed horrific acts against others. Why are we celebrating them?”

I would call Trump the final boss of racist historical figures, but he might like that too much. But I will say that he is an unequivocal racist who currently poses more of a threat than any other historical before him, because he is actively spewing racist rhetoric, passing racist legislation, and promoting racist ideology that empowers, emboldens, and practically weaponizes countless Americans who share his racist views.

So why is there a state park named after him?

So, who would be worthy of representing this public green space? Proposed candidates have included Heather Heyer, the 32-year-old woman who was murdered when a driver intentionally hit her with his car at a counterprotest to a white supremacist rally in Charlottesville in 2017 (remember when Trump called those white supremacists “very fine people”?), folk singer and activist Pete Seeger, who was known for his work protecting the Hudson River region, and Summer H. Lark, a Black journalist, Brooklyn District Attorney, and civil rights leader with strong ties to Putnam County. Or perhaps the selection could be democratized through a crowdsource campaign.

At the end of the day, the number of people more deserving of celebration over Trump is too high to count. He does not leave big shoes to fill. In fact, you could name the park after my deceased cat, Humba, and throngs of people would rejoice.

When I asked Eisenberg what Trump’s name represents for her, she responded, “Let’s just say I’d like to grab Trump by the park.”

Head to getoffmypark.com to show your support and learn more about the effort.