Harris brushed off their 44 per cent approval and 56 per cent disapproval in a CBS News poll released Thursday as just a cyclical process that will continue to wax and wane.

An NBC News poll also released Thursday shows Biden overall approval rating among adults at 43 per cent and disapproval at 54 per cent.

A third poll from the Associated Press-NORC Center for Public Affairs Research shows the president at 56 per cent disapproval and to 43 per cent approval. It also reveals that only 28 per cent of Amerians – and 48 per cent of Democrat respondents – want Biden to run for reelection in 2024

The latter two polls only include the president’s approval and not the vice president.

The CBS survey, however, indicates that people tend to approve or disapprove of Harris and Biden in tandem.

‘We heard the president say he intends to get out of the bubble of the White House and go and take the message directly to the people,’ CBS Mornings host Gayle King said to Harris in a Thursday morning interview. ‘But at this point, I know it’s only one year – it’s your one-year anniversary today, you’ve got three years to go – but the polling is not good.’

‘CBS polling shows only 44 per cent of Americans approve of your job, in particular, that you all have failed to pass the ‘Build back better,’ voting rights and police reform,’ she added. ‘What’s your new strategy to get this done?’

‘So, let’s just say to the point I think of the spirit of your question, polls go up and down, but we have to remain consistent in fighting for the American people and their needs,’ Harris deflected. ‘And so that is the strategy about staying focused. I’m not going to give up on the issue of affordable childcare. I know that there are many parents –’

Harris was then cut off by King, who posed: ‘Madam Vice President, can you do that without Congress?’

‘You can’t give up, and you can’t give up on the spirit of the American people to want things to be better. And that’s how I feel. I take that seriously,’ she again deferred. ‘So yes, we’re not going to give up on affordable childcare. We’re not going to give up on some of these issues that really get to the heart of what people need and they want. They want solutions, they want things to be fixed, they want to enjoy their families and not have to worry about some of these issues.’ 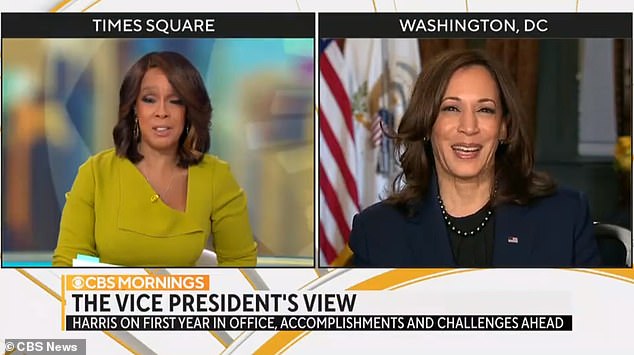 Harris has said previously that polls go ‘up and down’ when asked about her dismal ratings. However, the administration so far has only seen Harris and Biden’s numbers decrease over their first year in office.

An average approval rating tracker on FiveThirtyEight shows Biden’s approval at a low of 41.8 per cent at his one-year mark.