‘Buster’ the beloved boxer dog from John Lewis’ ‘best ever Christmas advert’ has died at age 12.

The loveable pooch, whose real name is Biff, became an instant hit after stealing hearts across the world when he appeared in John Lewis’ 2016 Christmas advert.

The John Lewis advert had told the story of a little girl called Bridget who loves to jump and her boisterous dog Buster.

Set to a cover version of ‘One Day I’ll Fly Away’, her mother and father buy her a trampoline, toiling while she sleeps to build it before hiding it in the garden to surprise her with it on Christmas Day.

As the snow falls in the evening, an acrobatic array of animals including foxes, a badger, a squirrel and a hedgehog start bouncing on the trampoline as the boxer watches forlornly through the window.

The next morning Bridget sprints out to use it for the first time but her joy turns to shock as cheeky Buster has the last laugh and uses her new toy before her. 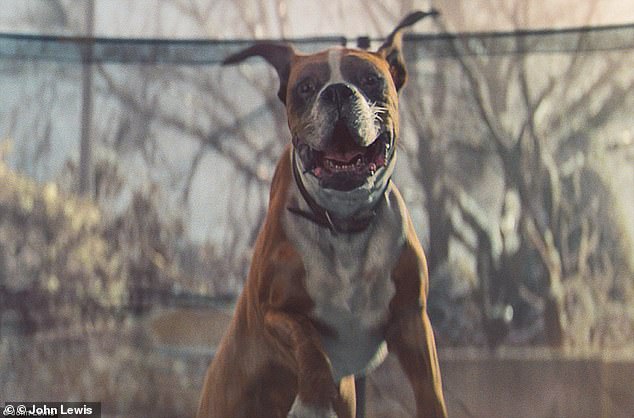 Biff, who starred in the John Lewis 2016 Christmas advert as Buster the Boxer, has died at the age of 12 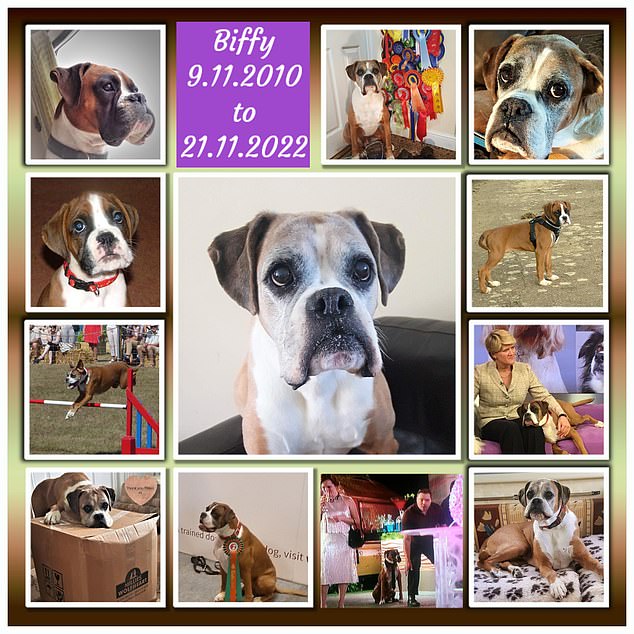 Biff’s owner Jan Patten from Daventry, West Northamptonshire, said: ‘Biff was a very much loved family member, and everyone that met him loved him too’ 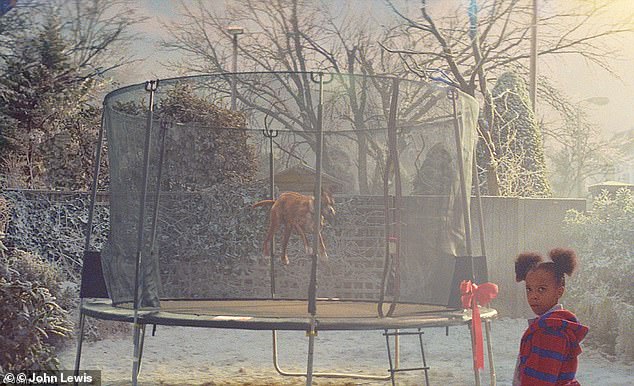 Despite the retailer creating many great festive adverts since, many people still deem Buster’s appearance to be the best yet.

‘Buster the Dog’ was voted as the best John Lewis advert in a poll by Radio Times earlier this month – taking 24 percent of the overall vote.

Speaking today, Ms Patten, from Daventry, West Northamptonshire, said: ‘Biff was a very much loved family member, and everyone that met him loved him too.

‘His fame gave us the opportunity to raise funds for animal charities.

‘Biffy and I had a really special bond, and no matter what I asked of him, whether it would be new tricks, displays, meet and greets, or photos with children, adults, and animals, he would happily oblige, with the patience of a saint.

‘At home, he was pure joy, making us smile every day. I don’t know if you are aware but boxers are known as the clowns of the canines, and even though Biff would be professional at the right time, he never ever lost the ability to make us laugh. We shall miss him so much.’

She added: ‘In the early hours of yesterday morning, he began to have seizures, which we couldn’t bring him back from, so we had to let him go.

Busters fans have also posted tributes to the popular pooch on social media.

‘Oh Biffy, we wanted you to live forever, you have broken so many hearts today and your mummy’s heart will be completely shattered.

‘Your special boy Jan, so sudden, I’m so very sorry and we are sending all our heartfelt love to you and Mick. I’m in complete shock.’

Another wrote: ‘So very sad. He did so much to help other boxers in need. A great ambassador for the boxer breed. Fly high sweetheart.’

A third added ‘We all loved biff and his advert was the best ever. We had a boxer who loved his trampoline, so the advert always brought a tear to our eye.

‘This news has got the tears flowing, so sorry for your loss.

‘It’s hard losing a boxer as they are so loving thank you for sharing biff with us all. You gave him such a great life. Rest in peace big lad.’

Biff found fame after Ms Patten spotted an advert asking for a dog to partake in filming.

Ms Patten sent images and videos of Biff across to the animal agency and was then asked to take Biff in for his big-break audition.

After wowing the judges, Ms Patten signed a disclosure agreement to keep her lips sealed until the advert was finally aired shortly before Christmas.

Biff later made appearances on the Big Fat Quiz of the Decade in 2020 and also starred in Hollywood film Show Dogs at the iconic Pinewood Studios.

Biff had been retired since he turned 10 and spent the last couple of years enjoying walks with Ms Patten and his other canine siblings.

His death comes just weeks after John Lewis released their 2022 Christmas advert in collaboration with Action for Children and Who Cares? Scotland.